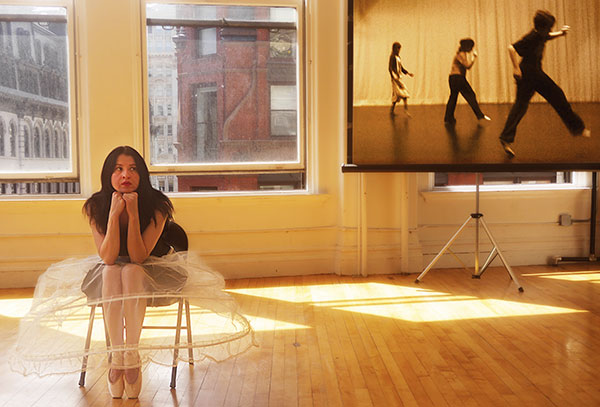 Performing as a family is nothing new to the Murphy/Lachow Company. For 25 years director/choreographer Megan Murphy and her husband, filmmaker Gregg Lachow, have made interdisciplinary work under many names, most prolifically as Run/Remain. For 23 of those years, they’ve often had sons Sam and Charlie in tow.

Lachow and Murphy’s collaborations are laced with eccentric plots, black wit and the broodiness of French New Wave auteurs—so one imagines that growing up with them as parents must be weird and wonderful. Their most recent work, The Man Who Can Forget Anything, is a theatre piece that delves into family history and contemplates the bittersweet absurdity of memory, aging and the passage of time.

Serving their flavor of narrative-defying, baroque genre mashup, The Man Who Can Forget Anything is a whirlwind of theatre, film, music and dance that features performances by Murphy, Lachow, Charlie and Sam, On the Boards regulars Marissa Niederhauser and Ezra Dickinson, actors Annette Toutonghi and Sarah Harlett and performer/musician Maggie Brown, as well as a foursome of musicians on trumpet, trombone, cello, clarinet and sax. Murphy and Lachow have been writing the piece together for the past year at their home in New York City, where the family relocated from Seattle in 2008. Chekhov’s Three Sisters—a frequent inspiration for the couple’s performances over the years—was a launching point.

“We find in Chekov a longing for the present,” Lachow says. “That longing is the spirit of our age, and of theatre in general. ‘What would it be like,’ says Vershinin, ‘if you could live your life over again? Consciously, I mean. Deliberately.’”

If the stage is a wormhole from the past to the present, Murphy and Lachow’s script is a launching point for the gestation process that leads up to the performance: a storyline collectively teased out by the various performers. The result is equally steeped in fact and in fiction; real life melts into the inchoate and imagined.

Then again, after 25 years of courting liminality, who’s to say when performance and real life disconnect?

“Our work comes out of our lives,” Lachow says. “This piece reflects a span of generations, of passing on what we know and of being reminded by youth of what’s important and what isn’t.”

It’s only fitting to return to their old stomping grounds for the performance, to summon ghosts of the past as well as to work with longtime friends of the family. They’ve known Brown, who composed all the music for the piece, since she was two, and have worked with Toutonghi and Harlett for the past 15 years. It’s also a chance to work with 23-year-old Sam, who as an adult returned to live and work in Seattle. A filmmaker and musician in his own right, the junior Lachow recently released a rap album, Huckleberry, that smacks more than a little of the Murphy/Lachow family gene, with irreverent, Seussian wordsmithery and the musings of a wistful, acerbic old soul in a goofball’s body. The Man Who Can Forget Anything will bring all of it—hip-hop, cellos, Chekov and a strong dose of Sehnsucht—together.

Lachow says, “Whether it’s because of their age or of having worked with us before, the kids take naturally to our ‘dance/film/theater/music—it’s all performance’ aesthetic.”

The Man Who Can Forget Anything
On the Boards
Oct. 9–12