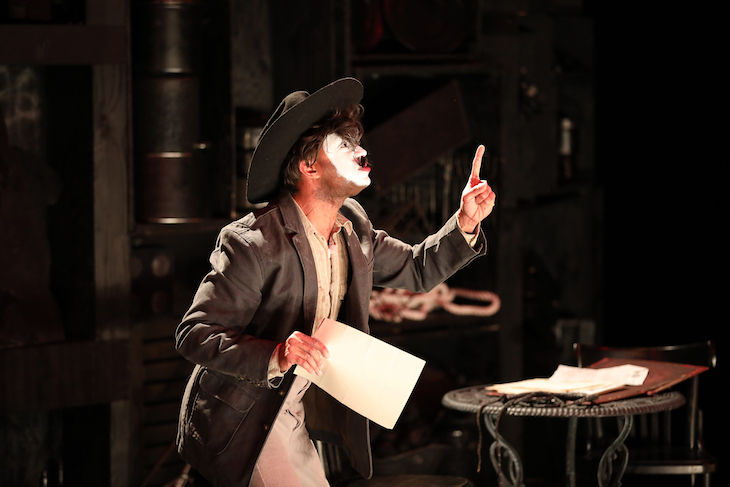 Lamar Legend in 'An Octoroon' at ArtsWest. Photo by John McLellan

Branden Jacobs-Jenkins’ An Octoroon is a play that gives you a shot in the arm and a punch to the gut. It’s thrilling and mesmerizing and discomfiting. It’s framed by meta-theatrical pretense, but its center is a kind of artifice that used to be more palatable to theatre audiences: the melodrama.

Nowadays, we tend to be more comfortable with the meta stuff. Show us a deconstruction. Give us some ironic distance. Brechtian alienation? Yes, please.

Jacobs-Jenkins is a skilled deconstructionist, chopping and morphing theatrical convention in odd and bracing ways, but his boldest flourish in An Octoroon is his hearty embrace of the most florid melodramatic tropes—and they’re all about race.

In remaking Dion Boucicault’s 1859 play The Octoroon, Jacobs-Jenkins resists merely scoffing at outdated ways of thinking and crude racial stereotypes. He leans into these elements, heightening them and forcing us to confront our own discomfort. Prepare yourself for cognitive dissonance.

ArtsWest’s production of An Octoroon is further evidence that this is the most exciting theatre in the city right now. Director Brandon J. Simmons navigates the balancing act, never tipping his hand too far as to what reaction a scene ought to evoke, and every element of his production works in concert to live up to the play’s complexities.

We begin in an approximation of a black box theatre, with Lamar Legend starring as the playwright’s supposed analogue, BJJ. “Hi, everyone. I’m a ‘black playwright,’” he says. “I don’t know exactly what that means.”

Clad only in a pair of Calvin Klein briefs, he recounts a conversation with his therapist that spurred his reimagining of Boucicault’s play. Then he admits he made the whole thing up. Then he chugs an entire fifth of whiskey. Legend tosses off this monologue with supreme charisma and ease—but he’s just getting started.

Boucicault himself (Mike Dooly) also shows up, along with an assistant (Jose Abaoag). Because all the white guys that were cast for his production bailed, BJJ will have to play them himself, and he applies whiteface makeup. Dooly’s drunken 19th Century playwright puts on redface. Abaoag’s assistant puts on blackface.

These actions are performed matter-of-factly, and the play proceeds to a very matter-of-fact re-creation of Boucicault’s play, in content, if not always in performance.

George (Legend) is the heir to a Louisiana plantation, pursued by an obnoxious, wealthy white woman (Heather Persinger), but secretly in love with Zoe (Jessi Little), the illegitimate daughter of George’s late uncle and a slave. She passes for white, but her 1/8 black heritage makes her an “octoroon,” which portends trouble.

Also a problem: The estate is deeply in debt, and the conniving, mustache-twirling M’Closky (also Legend) schemes to steal ownership away from George.

In his opening monologue, BJJ talks about his appreciation for the play’s melodrama, and that feeling extends to this adaptation, which earnestly reproduces Boucicault’s ostentatious twists and turns.

But should we be appreciating this? Dooly’s rum-swilling, war-crying, headdress-wearing Native American and Abaoag’s two different minstrel-show slaves would provoke uneasy shifting in seats even if their faces weren’t painted. That they can perform these roles without a hint of ironic winking is a testament both to the actors’ commitment and to the play’s unflinching confrontation of the power of artifice. How many hideous prejudices have been cemented in psyches because of performances like these?

The milieu is thrown into relief by three slave characters (Dedra D. Woods, Jéhan Òsanyìn, Jazmyne Waters) whose speech is distinctly contemporary. Woods and Òsanyìn’s forward-looking optimism is about as wrenching as anything else here, because it forces us to consider all the ways things haven’t gotten better.

Just when you think you’ve got Jacobs-Jenkins’ intentions pinned down, he pulls the rug out. Sometimes, it’s by ripping away fiction’s safety barrier, like when the appearance of an archival photograph stops a jokey meta riff dead in its tracks. Sometimes it’s by leaning into deliberate obfuscation, like a visit from the watchful Br’er Rabbit, far creepier than anything in Donnie Darko. (The masked character, played by Jacobs-Jenkins in the original production, appears to be played by Simmons here.)

It’s easy to imagine 100 ways a theatre company could mess this up, but ArtsWest’s production never falters, from performance to direction to Matthew Webb’s excellent lighting design to Julia Hayes Welch’s magnificently menacing scenic design, a bric-a-brac mountain of darkly colored artifacts (and one very white rope). Like just about everything else in An Octoroon, that set will also do something you didn’t see coming.

An Octoroon runs at ArtsWest through May 13.