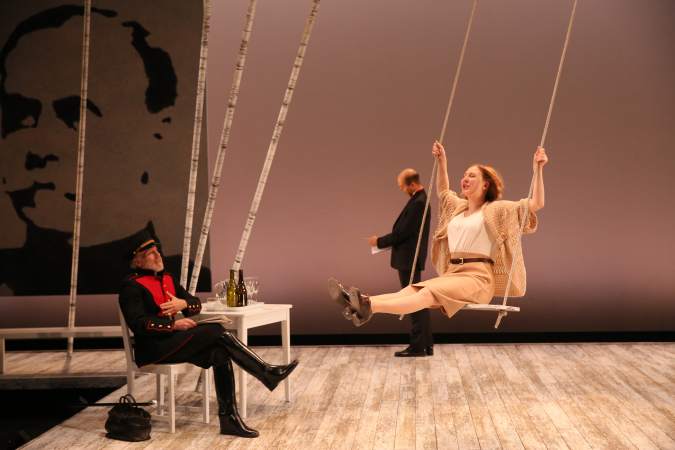 Two years ago, The Seagull Project, a Seattle-based theatre company specializing in the plays of Anton Chekhov, mounted The Seagull, one of the playwright’s greatest works. The play was good (costumes, sets, some standout performances)—but in Chekhov’s pieces, what isn’t said is is just as important as what is, and that subtle psychological connection wasn’t quite there.

Now it is. Last week the company opened its second production, The Three Sisters, at ACT and those nuanced, Chekhovian connections made all the difference. Maybe it was the two months the company spent in Uzbekistan last spring for the Festival of American Culture: Ilkhom East/West. Whatever the reason, the psychological lives, longings and personal relationships crackled on stage, giving the play a deeper emotional dimension and pushing the company to a higher level of artistic accomplishment.

The play opens in a provincial Russian town where the Moscow-born sisters Prozorov—Olga (Julie Briskman), Masha (Alexandra Tavares) and Irina (Syndey Andrews)—are celebrating Irina’s birthday, which also happens to be the one-year anniversary of their father’s death. Well-educated and raised in a culturally rich household in Moscow, the sisters find themselves bored and unhappy with rural life. They constantly talk of moving back to the city. They worship their academic brother Andrey Sergeevich (John Abramson).

But the household dynamic shifts when Sergeevich marries Natalya Ivanovna (Hannah Victoria Franklin), a peasant woman who ends up dominating the house. He begins to lose his scholastic dreams in favor of gambling, Olga resigns herself to the life of a spinster and headmistress of the local school (a job she hates). Irina watches her dreams of Moscow fade, and Masha, trapped in a dull marriage to the bumbling, well-meaning teacher Fyodor Ilyich Kulyigin (Brandon J. Simmons) finds her intellectual match in Vershinin (David Quicksall), commander of the nearby army post, also trapped in an unhappy marriage.

Under the careful direction of John Langs, this tangled cast of characters (and many more) moves around the stage with bored upper-middle-class malaise; they love to talk about philosophy and history, and to hear the sound of their own voices. Tension was laced throughout the play as though everyone is waiting for something, but not sure of what. It captures that vibe of the “idle rich” who have grown bored with their lives and resorted to destructive means (gambling, affairs, cruelty, alcohol) to keep amused, but in the process hurt not only themselves but those around them. There are several abstract, dreamlike sequences with colored lights, the ensemble looming ghost-like as Irina almost seems to be going mad, fighting against the psychological pressures of a life unfulfilled. The interactions (both verbal and silent) between Tavares and Quicksall were especially charged—the smallest touch of a hand or glance from across the room conveyed palpable longing.

Despite the age of the play, there was something very modern about the performance. While the costumes were distracting in their strange hodgepodge of styles from the early 20th century, the dialogue had a very contemporary cadence and delivery, and certain inflections added humor where it otherwise might not have been. The text was Chekhov’s, but this approach to the language made the production feel fresh.

It’s a story we know well—starting off life with hopes and dreams we are sure will come true, only to face the rude awakening of adulthood and the responsibilities it brings. Like Irina we lament, “Where has it all gone to?” But we also learn that change can be good. We learn and grow and evolve, and as The Seagull Project proves with Three Sisters, sometimes we come out even better than before.