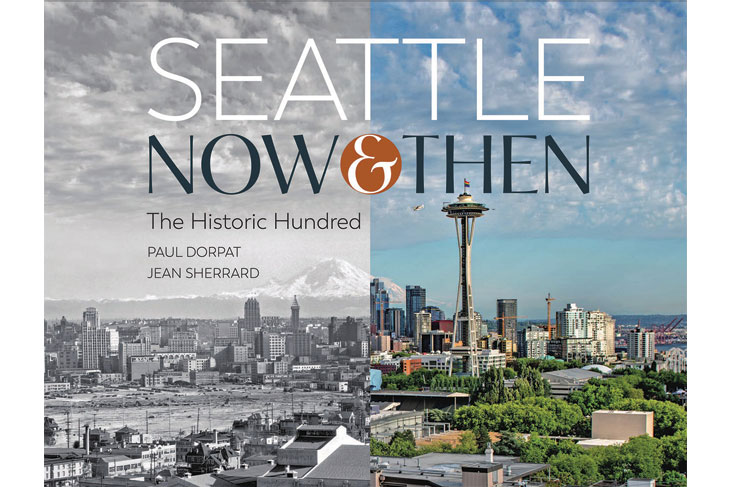 Paul Dorpat and Jean Sherrard’s 'Seattle Now and Then'

In a quick word association game, “Seattle landscape” would probably elicit cranes and condos as often as mountains and water and polar fleece. For long- and short-time residents, losing what seemed like fixed points in space and time is disorienting and demoralizing. But zooming out on one’s personal city viewfinder adds important perspective on what Seattle was and is, and therefore on what it is becoming. Three new books out this fall seek to capture this moment in this place that we live.

Zack Bolotin’s Mid Seattle started earlier this year as a personal architecture-photo project, housed primarily on Instagram and born from an interest in midcentury design he comes by honestly. Both Bolotin’s parents are historical nonfiction authors. One of his father’s main fascinations and areas of expertise is the 1962 Seattle World’s Fair, which was smack in the middle of what we now think of as “midcentury” and a huge driver of construction in its day: apartment buildings with exterior, iron-railed walkways; split-level designs; pale brick and polished concrete.

“Midcentury stuff is pretty popular in our [mid-30s] age group, I think in part because our parents’ generation grew up then, and we’re just far enough removed that it’s become interesting,” he says. “And people that are heavily into design—or pretty pictures on Instagram—are into midcentury stuff because the shapes and lines are appealing.”

Mid Seattle Volume One went on sale in September; Bolotin isn’t sure how often he’ll publish but is thinking semi-annually. For now, he’s printing the book in batches of 100, available online and at his Capitol Hill joint, Porchlight Coffee and Records. Slim and simple, with a minimalist aesthetic that echoes its subject, Mid Seattle focuses on buildings and architectural details—the only text is the year the structure was raised and the neighborhood where it resides. To date, Bolotin has covered a large swath of the Puget Sound region and ventured as far south as Kalama, Wash., and his list of locations is only growing.

Looking further back in time is Seattle Now and Then: The Historic Hundred, an outgrowth of Paul Dorpat’s long-running Seattle Times column of the same name, to be published on Oct. 28, his 80th birthday. Since early 1982, Dorpat has been tracking down and researching historical photos from around the city, then taken a contemporary photo from the same (or as close to same) vantage point as possible and running them side by side, along with an essay telling the story of the place, the era and perhaps the people involved.

“History is delightful,” Dorpat says, in the book’s introduction. “It’s understanding. It’s actually the truth if you do it right, and the truth is progressive. It always is.”

For the last dozen or so years, Jean Sherrard has been the column’s “Now” photographer, and he was the driving force behind this latest round-up of 100 photos, culled from Dorpat’s staggering 1,800-plus columns. The book’s first photo comes from Dorpat’s first column, picturing March 12, 1919, on the corner of 4th Avenue and Pike Street, where a throng of people celebrate the return from WWI of “Seattle’s own regiment, the 63rd Coast Artillery.” Nearly a century later, Sherrard captured the 2017 Women’s March flooding the same intersection.

To create the feature “Building Growth Spurts” the authors of Seattleness used 3D modeling to illustrate four periods of building boom in our downtown corridor, from the Smith Tower to Amazon HQ.A hotel ravaged by the great Seattle fire of 1889 abuts a 2017 image of the infamous Yesler Way “sinking ship” parking garage. Hooverville shanties in 1934 become modern shipyards. A 1913 view from the Smith Tower stretches out far beyond Lake Union; in late 2017, you can’t see past the encircling skyscrapers. About each of them, Dorpat tells a story, though “there was a lot of editing done on my original text,” he says. “That was a planned reduction to make the size of the contemporary photos bigger.”

The lion’s share of Sherrard’s “Now” images were taken in the last three years. “Obviously it’s a losing battle. There are photos in the book that were taken a year ago which are now their own version of a ‘then.’”

“You know how when you’re a kid and your parents take a doorway or something and measure your growth?” Sherrard asks. “So, you know that when you were six years old you were 3’7”, and then you see all these little marks that follow you, and generally they’re dated. To me, these recordings of a city’s growth and progress allows us to chart our own growth and progress. How do we respond to these markers? How do we find ourselves in an environment? How do we find home?”

That same nebulous question inspired Seattleness: A Cultural Atlas. The design-centric book, out Oct. 23 from Sasquatch Books, dives into both the quantifiable and ineffable bits of Seattle, our Seattleness. The three authors, Tera Hatfield, Jenny Kempson and Natalie Ross, synthesized an astonishing amount of data to tell an undeniably human story.

Using data visualization, Seattleness crystallizes abstract or complex concepts into beautiful, digestible images. The book’s first spread, “Against the Grid,” rearranges all Seattle’s land parcels into a map of Seattle imagined in the rings of a western red cedar tree. “Gray Anatomy” features a histogram made from 3,650 color samples, taken by a panoramic camera on top of the Space Needle throughout 2015. Incredible Seattle women get illustrated histories. Oysters, coffee, cannabis, islands, trees, the boats of Lake Union, even the gum wall—all pieces of our city’s indescribable character.

“A city is a very personal thing,” Hatfield says. “How you view it, even how you navigate it. We wanted to allow that cities are organic in that they’re constantly changing and being restructured, and the people who live in them are flowing in and out constantly.”

All three of the book’s authors worked or went to school in the design field in Seattle and share a background in the built environment and graphic design. “When you’re designing sites, you try to become an anthropologist and learn as much as you can about the place and the people that you’re designing for,” Hatfield says.

The impossibility of the task, summing up a city, was both challenge and appeal. “We tried to capture diverse perspectives and acknowledge where we were coming from,” Hatfield says. “It’s interesting to study from every angle because it’s constantly changing. It’s ephemeral. And while you’re shaping it, it’s also shaping you.”