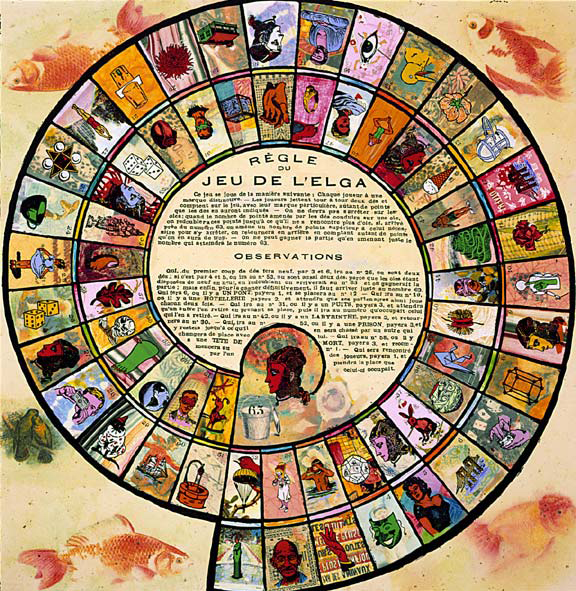 I really like going out with non-artists on art walk nights. My brain has been flogged by art and art history and artspeak enough over the years that it’s easy to lose track of who’s making art for whom, why it matters, to whom it matters. Other artists? Collectors with money? The homeless guy hanging out across the street from the gallery?

I admit, even I feel like an outsider at times. I studied literature at an Evangelical college in the Midwest — hardly a boot camp for scholarly writing on art. Yet being able to approach art as a self-taught admirer or practitioner brings with it a different kind of clarity that once you’ve lost, you’ve lost.

This past Thursday I was out with a friend — a talented photographer in his own right, but someone who hasn’t jumped on the carousel of eternal art openings yet. We were walking through SOIL Gallery to the backspace, where Matthew Offenbacher has his Decor for Interstellar Flight up. It’s a series of styrofoam panels painted with richly patterned designs. He’s created a show around the idea of decorating the interior of a spacecraft with changeable panels of art to keep astronauts from going nuts on extended flights.

I really love Offenbacher and his work. He’s never afraid to develop whimsical ideas into something aesthetically sincere, rooted in a tangled wealth of historical and pop culture references. (What is, after all, the relationship between decor and fine art these days? Is this what an Arts and Crafts movement for the space age looks like?)

Decor for Interstellar Flight comes with a two page publication by Offenbacher. My friend, after looking at the styrofoam paintings for a while, picks up the article and reads, then plunks it down with a huge shrug.

“I don’t get it,” he says shamelessly.

Then, after a short pause he pouts: “But art is easy.”

He means art should be easy. He’s being a little histrionic, but I also don’t doubt he’s sincere. He’s not stupid: he can hold his own discussing feminism and pop culture and art, and his response gives me pause. Sometimes the conversation around art can become like a botched game of telephone. Maybe my friend’s blood sugar is just low. We need a sandwich.

A few months ago I took a hairdresser friend as my date to the Roy McMakin exhibit I Continue to Believe in the Potential to Express Hope and Sorrow through Furniture at Western Bridge. McMakin’s work could be described, roughly, as a poetics of furniture and gender and domesticity. He loves furniture, plays with it, cuts it up, subverts it, makes it not-as-it-seems. I find it a bit too dry at times, and this was one of them. My friend and I watched his series of videos projected on walls in a dark room. The friend ended up making shadow puppets in the video installation. We sat on some chairs in the main hall of the gallery — they were peppered all around the space — and chatted.

“I have a childlike gaze because I have ADD and I just think about food,” he says. “So I’m a harsh audience.”

He says that, but he’s also not stupid about art and counts a bevy of artists among his friends. Are we insincerely making apologies for our boredom? We meander to another room and sit down at a table painted half black, half white.

Western Bridge director Eric Fredericksen’s head pops up like a jack-in-the-box from a walkway overhead.

“But I can sit on those?” I say, pointing to the installation of chairs in the adjoining room where we’d just been sitting.

“But they are real!”

“They’re not real, not tonight.”

We get up from the seats (Untitled, Ebonized white oak and enamel paint on Eastern maple, 2005) and shuffle away, equally amused and chagrined.

Did we just experience the mystery of McMakin’s work? Or merely get hand-slapped for an opening night faux pas? Must my tired ass and my ego be insulted by a poetics of furniture “realness” so rarefied I miss it altogether? It’s the kind of scenario you dread, the thing that keeps art walking virgins from going out (or at least insures you’ll want to prefunk with a few shots of gin beforehand to keep your courage up). Luckily, Western Bridge isn’t stingy with excellent Chardonnay.

The reward of searching for that one breathtaking moment sometimes outweighs art world anxiety. Towards the end of last Thursday’s art walk my photographer friend paused in front of a print at Greg Kucera. It was Jane Hammond’s From the Goose to the Girl, a game board edged with dreamy goldfish swimming around a spiral of hyper-colored graphic images. I fumbled my way through the French translation to try to decipher the runic instructions. We studied the iconography, enchanted by the richness of visual non sequiturs. This is the kind of moment I’m looking for: an unexpected laugh, a religious-like rush, visual overstimulation. I also want my childlike gaze sated sometimes.

Art is addictive like that. Sure, it’s masturbatory and self-indulgent, sometimes esoteric and nonsensical and overreachingly philosophical. But only insomuch as humans are, which is why it never ceases to be magic. (I always feel like I’m going off on some Dr. Who rant about how wonderful Earth and humans are when I speak of art in broad strokes, but it’s just how it is.) The riddles embedded in furniture, goldfish, board games and space travel are, in a sense, what it is to be human. I’ll always chase after it, even if it means occasionally sitting in the wrong chair like an idiot.