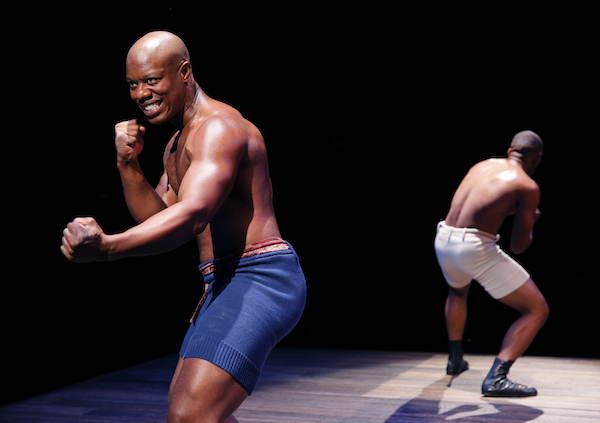 'The Royale' at ACT, photo by Chris Bennion

Tuesday, Oct. 4
It’s October, so of course the ghouls will be out in force all month at local film and music venues. Tuesday, however, marks a surprising rare live performance from Fabio Frizzi, legendary Italian composer of scores for Euro horror classics like The Beyond, Zombie and City of the Living Dead. He’s not a horror-household name like fellow countrymen Goblin, but his percussive, synth-spiked, and terminally creepy soundscapes are just as distinctive and influential. –Tony Kay
Neumos

Tuesday, Oct. 4 – Sunday, Oct. 9
This is the last week to see The Royale at ACT, if you haven’t already seen the story of Jay “the Sport” Jackson, a popular black boxer gunning for the (white) world heavyweight champion in 1905, you’re missing out. It’s fast and physical, thought-provoking without being overbearing and emotional without sacrificing energy, and Jarrod. M Smith is giving a hell of a central performance as the driven, charismatic Jay.  –Gemma Wilson
ACT Theatre

Wednesday, Oct. 5
Contemporary artists like Jungle, Little Dragon and Shaprece demonstrate that trip-hop—that sinuous, psychedelic swirl of hip-hop, dub, jazz and electronic music—has existed long enough to experience a revival. But it was acts like Thievery Corporation that established the style back in the mid-’90s. The duo, comprising Rob Garza and Eric Hilton, was born out of a mutual affection for vintage soul records and of-the-moment club life, the latter focused as it always is on the urgent need to dance to new sounds, whatever their provenance. Thievery’s last record, 2014’s Saudade, dips heavily into traditional Brazilian music, so expect much of that tonight, along with whatever sultry rhythms the crew is currently feeling. –Jonathan Zwickel
Showbox

Thursday, Oct. 6
Local art rock collective The Fabulous Downey Brothers are presenting their biggest show yet, a career-spanning retrospective mixed-media musical happening. Taking over the cavernous confines of Live Nude Girls Present (the old Lusty Lady space that has been lovingly curated by the CMRTYZ crew the past few months) TFDB bring a mix up of live music, costumes, art, lights and projections to sear retinas and tickle earholes. Their everything-plus-the-kitchen sink musical melange defies categorization, but imagine Ween as a Gary Newman/B-52s/Dan Deacon/Klaus Nomi tribute band and you are headed in the right direction. Check your preconceptions at the door and drop a dose of your favorite activator, shit’s gonna get weird. –Dan Paulus
Live Nude Girls Unite

Friday, Oct. 7 – Saturday, Oct. 8
Greg Behrendt was part of the early-‘90s Bay Area comedy cohort that included Janeane Garofalo, David Cross, Margaret Cho, Marc Maron and Patton Oswalt. Though dizzyingly diverse, this group of performers all practiced a brand of comedy that was smart, liberal and urbane. Like his classmates, Behrendt went on to an illustrious career, from writing for TV and best-selling pseudo-self-help books to hosting the popular Walking the Room podcast and playing in surf punk band The Reigning Monarchs. Last year he won a battle with cancer and he returns to the stage to deliver that signature SF brand of personal, engaging standup. –Brett Hamil
Laughs

Saturday, Oct. 8
A friend of mine describes Boys Noize as “the thinking-person’s Justice,” which is shorthand for saying that Hamburg-based DJ/producer Alexander Ridha makes hard-banging electronic dance music for people who consider themselves connoisseurs. Released over the summer, Boys Noize’s latest LP, Mayday, plays like a motivational soundtrack for dance-club hedonism, Tony Robbins rendered in the wordless language of tech house, constructing high-pressure buildups out of meticulous, big-beat suites only to demolish them with unabashed, fist-pumping breakdowns. The music is equally soulful and relentless and it’ll sound fucking bonkers on Q’s Funktion-One sound system. –Jonathan Zwickel
Q

Saturday, Oct. 8
Bubbling up out of Chicago’s fertile, collaborative music community, Ryley Walker plays a meditative form of folk-rock that harkens back to the psychedelic era’s indulgence in sonic searching. Walker is a craftsman, and even as his long, lyrical songs meander past the six-minute mark, they unfold with a strange internal logic, equally suspenseful and soothing, moody and curious. (David Crosby’s cult-fave solo album from 1971, If Only I Could Remember My Name, is a good touchstone.) He’s released a few albums in his short career, but his fourth, Golden Sings That Have Been Sung, released in August on Indiana’s Dead Oceans label, is his strongest. As a masterful six- and twelve-string guitarist backing a band of Chicago’s finest experimental musicians, Walker should be a joy to experience live. –Jonathan Zwickel
Barboza

Saturday, Oct. 8
Atlas Obscura documents all the parts of a city that any even slightly non-boring traveler cares to visit. For instance, rather than funneling the masses to “Pike’s Place Market,” its suggestions for the Seattle tourist include the Blue Moon Tavern and the Allen Library’s (very occasional) tours of its rare books collection. To celebrate the formation of the Seattle Obscura Society and the release of Atlas Obscura: An Explorer’s Guide to the World’s Hidden Wonders, AOP is hosting a party in some usually off-limits corners of the Seattle Underground. –Sarah Galvin
Seattle Underground