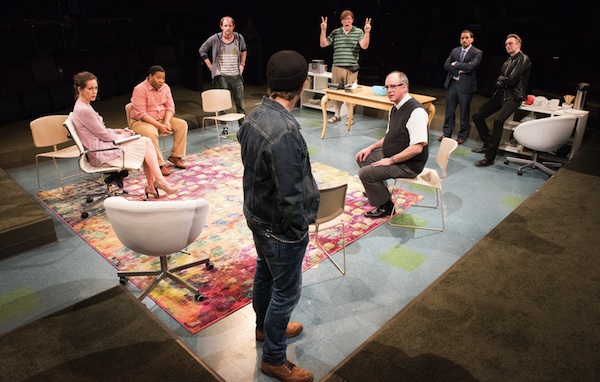 Cast of 'Seven Ways to Get There,' photo by Truman Buffett.

As the crowd around me leapt to its feet after a performance of Seven Ways to Get There at ACT’s Allen Theatre last weekend, all I could think was, “Why?” Why did they love it and I didn’t? Why was this story being told on stage? Why were we here?

Here’s all I could come up with: Seven Ways is a bad play executed well.

The story centers on seven men, all patients of the same therapist, who end up together in group therapy. They all have very different stories and problems: Darragh Kennan is an angry, court-ordered attendee; Bradford Farwell a too-tender painter; Charles Leggett a conflicted religious man; James DeVita a control freak businessman; Ty Boice a sex-addicted hot guy; Jim Lapan a socially strange, professional therapy-goer and Bob Williams a man crippled by indecision. Kristen Potter has the thankless task of playing the therapist, who seems to be so bad at her job that her inclusion as the only female character felt practically insulting.

There are some truly great performances happening here, but they’re wasted on two-dimensional characters whose stories don’t weave together into a cohesive whole. Things get better, things get worse, for both individuals and the group. But Dwayne J. Clark, who pulled from his own experience to write Seven Ways with playwright Bryan Willis, misses one key problem: Watching other people in therapy is really boring.

ACT associate director John Langs has done an excellent job here—the pacing never slackens, the tender moments breathe, the laughs land (though for the record, including recognizable local references like “Wallingford” and “Tukwila” to get laughs is not the same as writing actual comedy). But still: why?

Not every play, nor every piece of art, has to have some Big Important Message. But if there’s some sort of universality being taken aim at, it’s important to get there—or at the very least know where “there” is. 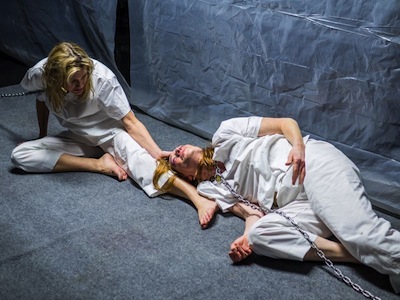 As Nine opens, two women dressed in white walk onto a stage covered in dingy grey carpeting. Standing in front of a thick, cloudy piece of backlit plastic sheeting, they both reach down and grab the chains on the floor and fasten them around their necks and the lights snap to blackout.

As the lights come back on they are on the floor, one badly injured—in this place, one is always badly injured. We don’t know who they are, where they are or why they are there. All we know is that they are together, they are strangers, and they are helping one another stay alive, whether by taking stock of one another’s injuries or trading platitudes and picking fights just to exercise their minds and keep themselves above water. It’s a flash, at once nowhere and everywhere, of a horrifying, Kafka-esque situation.

Despite committed performances from both Colleen Carey and Cynthia Geary the piece ends up feeling like a scene study class, thanks in part to the technical limitations of the space. When someone who is supposed to be a terrifying torturer appears through the plastic during a scene break, only to gingerly apply wound makeup to one actress’s face, all sense of unease—let alone terror—was sucked from the room.

The stronger (though much simpler to stage) half of the evening comes after intermission with the US premiere of The Long Road. The play was first produced in London with the help of the Forgiveness Project, a British organization that fosters understanding between the victims and perpetrators of violent crime. The Long Road centers on the Pritchard family after their son Danny is stabbed to death one night by a young woman on the street. In their grief tailspin, his father drinks and runs, his brother stays away, and his mother scrambles to find relief from the overwhelming rage she feels toward her son’s killer.

The accents were a bit uneven and the many moments of direct address (and the killer’s seemingly speedy turnaround) smacked of after-school special—telling us, rather than showing us, how forgiveness can help us heal. But some of the performances, especially Eleanor Moseley as a mother clawing her way back from overwhelming, all-consuming grief, overcame the schmaltz factor. (My only real qualm was the set design, which included a giant prismatic face painted on the rear wall—apparently to symbolize how this dead boy looms so completely over the lives of those he left behind? Don’t worry guys; we get it.)

Both pieces lend themselves to “there but for the grace of God” ruminations, but even so this doesn’t feel like a complete, well-rounded evening of theatre; it feels like two disparate pieces shoehorned together to make slightly-too-long show. But when these playmakers remember to approach their heavy topics with a light hand, the results are surprisingly touching.