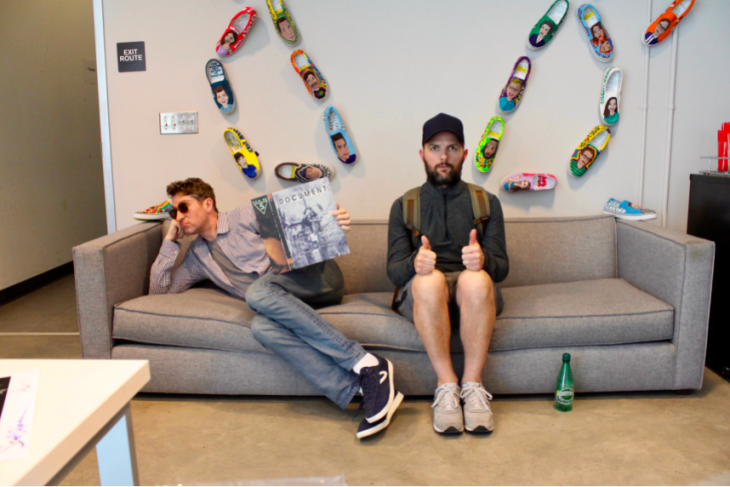 Every once in a while the internet throws you a bone. I recently finished listening to the I Only Listen to the Mountain Goats podcast and started on R U Talkin’ R.E.M. Re: Me?, and the shows have left me feeling hopeful for the state of digital mass communication. Both represent new ways of talking about music and fandom, tackling a slippery subject with style and ingenuity. Though their approaches vary widely, the two podcasts thrive in this new golden age of niche audiences, pointing out cozy corners of the World Wide Web heretofore uninhabited. They revivify existing works of art and form something new out of them that itself approaches art.

In the case of I Only Listen to the Mountain Goats, we are treated to a song-by-song examination of an entire album by the titular indie band, presided over by the singer-songwriter himself, John Darnielle, and interlocutor Joseph Fink, of the popular Welcome to Night Vale and Alice Isn’t Dead podcasts. The album discussed in this debut season, All Hail West Texas, is the last one Darnielle recorded on a Panasonic RX-FT500 boombox before going on to produce studio albums with 4AD, and represents an artistic crossroads containing the musical blueprint for past and future work.

In each episode, Darnielle and Fink discuss the writing and recording of a specific song, then talk to an artist who’s been commissioned to record a cover of that song, indie-rock notables like Andrew Bird, Craig Finn and Amanda Palmer. This round-robin format provides the perspectives of creator, fan and interpreter wrapped up in a well-edited (if somewhat haphazardly recorded) package.

With a mind as frenetic as Darnielle’s and a fandom as fierce as Fink’s, the discussions spin in a variety of directions, from recording techniques to the relative merits of translated literature to the plight of immigrants. The discourse is heady and humane, anchored each episode by a song that’s worthy of examination and reinterpretation.

As far away as you can get from the gentle meditations of Mountain Goats, there is R U Talkin’ R.E.M. Re: Me?, a comedy podcast from the Earwolf Network featuring Adam Scott (Parks & Recreation, Big Little Lies) and Scott Aukerman (Comedy Bang! Bang!). The “two Scotts” are master improvisers with uncanny chemistry and a shared love of R.E.M., whose entire catalog they have endeavored to discuss at length. To understand the multifarious levels of satire operating within the show, start at the name: it’s a play on their previous show, U Talkin’ U2 To Me?, in which they attempted to discuss the Irish band’s complete oeuvre. That’s at least two levels of self-referential irony and some typographical wordplay in the title alone, which gives you an idea of what to expect in the show.

Aukerman and Scott improvise on such a granular level that they can turn a simple opening greeting into a multilayered verbal joust; on one episode it takes them 15 minutes to even get into the purported subject of the podcast, by which time I’d laughed out loud a half-dozen times. The Atlantic aptly describes the show as “niche normcore satire,” a couple guys playing an absurdly narrow topic as broadly as possible. In the end, I’d estimate about 10% of each episode actually addresses R.E.M.

I couldn’t have chosen a better pairing to explore musical fandom podcasts. Where Mountain Goats takes deep stock of a songwriter’s serious contributions to art, Talkin’ is constitutionally incapable of taking anything seriously, including its own format. What both podcasts share is a deep love of the music; there’s as much true feeling in John Darnielle describing his fondness for biblical parables as there is in Adam Scott skewering his vapid teenage self waiting breathlessly for the new R.E.M. release. Underneath their disparate trappings, both podcasts are about how music can illuminate who you were—and who you are—at a specific moment in time.

It’s been a tough year for the internet. The intimacy and solidarity engendered by digital connection have been punctured by the menace of privacy breaches, malign tech monopolies and targeted disinformation campaigns. Many people, including me, have found themselves looking back at the pre-internet ways of interfacing with our chosen communities and seriously considering disconnecting from social media. Before we all became Extremely Online, music and fandom were the primary modes of connection with strangers, who sometimes became lifelong friends. These two podcasts capture that communion. They suggest that we can still build something tender and sincere atop the rubble of our cyber dystopia. As entire eras evaporate under the algorithm’s cynical regime, they remind us that you’re never too jaded if you can still be a fan.