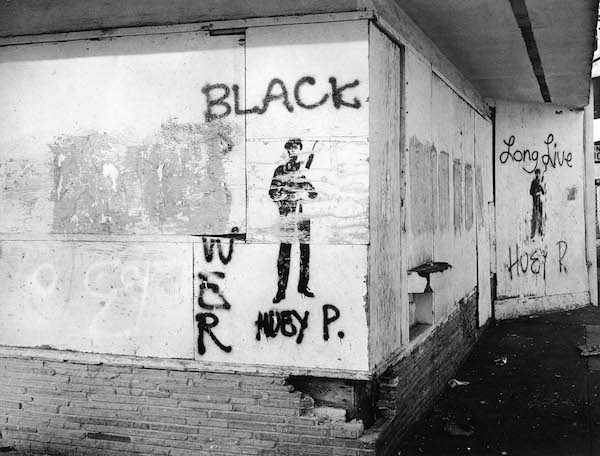 Lewis Watts, "Graffiti," West Oakland, 1993. Courtesy of the photographer, from 'All Power: Visual Legacies of the Black Panther Party,' PCNW 2018

On a battered, graffitied wall, a stencil of a beret-wearing, rifle-carrying man in leather coat is flanked by partially obscured, spray-painted letters: BLACK…WER and HUEY P.

Huey P. was, of course, Huey P. Newton, the student, author and civil rights activist who, in 1966, co-founded the the Black Panther Party for Self-Defense with Bobby Seale. As part of a lifelong series documenting the African American cultural landscape, photographer and university professor Lewis Watts took the photo in West Oakland, Calif., 27 years after the Panthers’ founding and 11 after its disbanding. It’s one of the first images that visitors encounter in All Power: Visual Legacies of the Black Panther Party, an exhibition that honors the many ways that contemporary African American artists— artists such as Watts, Maikoiyo Alley-Barnes and Ayana V. Jackson—continue to build on the aesthetic and social legacy of the Party.

The show, which opened last Friday at Photographic Center Northwest, sprouts from the eponymous book that Michelle Dunn Marsh, executive director and curator of PCNW and founder of publishing company Minor Matters, co-edited with independent scholar and curator Negarra A. Kudumu in 2016. To celebrate the 50th anniversary of the founding of Seattle’s Black Panther Party chapter, PCNW adds a newly curated photography exhibition to the book, expanded to also include local artists such as Christopher Paul Jordan and Ouidakathryn Bryson.

“Two years ago, when working on the book, Watts had told me he once made a photograph of Huey P. Newton but that he couldn’t find it,” says Dunn Marsh when I meet her and Kudumu at PCNW to talk about the show. “When I contacted him for this show, he looked for it again and found the negative a few weeks ago. This is the first time the portrait has been seen, printed especially for the exhibition.”

The two photos by Watts belong to a trinity of black-and-white prints Dunn Marsh installed together to honor the founders of the Party. The third is a portrait of Aaron Dixon reading the Black Panther newspaper in front of the Seattle Black Panther Party office on 34th and Union, taken by Gill Baker in 1968. Behind Dixon is a famous poster with Seale’s and Newton’s images and their iconic outfits.

“This photograph is one example of how smart they were in their use of imagery,” Dunn Marsh says. As Dunn Marsh explains, similar techniques of repetition and visual mise-en-abyme (image within an image) occur in North Carolina-based artist Endia Beal’s portraits of two young women standing in front of a photographic backdrop in their living room, where framed photos add another story-within-the story.

“The Black Panthers were very aware of the power of imagery and of the effects of repetition,” Kudumu says. “The key markers and unifying aesthetic were always present, as a constant reminder of who they were and what they stood for. No matter how you feel about Beyoncé or Black Panther [the movie], you would not have either of those phenomena without the Panthers’ iconography. When you talk about the power of pop culture, this is it: permanence.”

Further into the gallery space hangs a quartet of landscapes. For his series A Bleak Reality, Kris Graves photographed sites where African American men died at the hands of the police. Dunn Marsh points at each photo while announcing each name: Philando Castile. Michael Brown. Walter Scott. Eric Garner. “I met Kris after the book was finished, so I’m happy I was able to include his work now,” she says.

Another addition is “Edges of a Silhouetted Earth,” a collage by Christopher Paul Jordan, for whom community organizing and multidisciplinary art are equal halves of his practice. In 2015, Jordan organized a die-in intervention at the Tacoma Art Museum titled #StopErasingBlackPeople in response to the erasure of Black artists and bodies from the HIV/AIDS narrative in the museum’s exhibition Art AIDS America.

“This collage was how I worked through the trauma of experiencing Art AIDS America and how I got myself together emotionally so that I could work on the #StopErasingBlackPeople intervention,” Jordan writes in a recent email. “I reimagined the September 2015 lunar eclipse as a brief reflection of my blood (family) reaching out from the other side. Their message, becoming apparent during a momentary wane of whiteness, claimed the surface of the moon that day to remind us that they will not be erased.”

Jordan says he’s grateful to the Party’s Minister of Culture, Emory Douglas, whose work inspired him as a teenage graphic designer. “Years before I learned to draw, he taught us that the real work is in public space. As an artist and community organizer, when I think about the Black Panther Party, I think about the energy source that they tapped into and connected to generations of people.”

A three-part discussion series at the Frye Art Museum organized by Kudumu, who’s manager of the Frye’s public programs, will further explore the Party’s aesthetic influences internationally, nationally and locally. Panels will feature artists and activists such as Beal, Robert Wade, who took early photographs of the Party and documented their space as part of the Pan-African Festival in Algiers, and King County Councilman Larry Gosset.

The first discussion, moderated by Kudumu, contextualized the Party’s international ties and influence. “As much as we Americans claim the iconography of the Black Panther, and as much as it was American,” she says, “it was also shared with a lot of progressive movements in what we now call the Postcolonial world.”

It’s one of the ways in which Kudumu and Dunn Marsh deepen their initial project from 2016. “Two years after the book I realize this could easily be a 10-year research project,” Dunn Marsh says. “It was important to both of us that we present this as a beginning, to inspire further research and exploration.”

All Power: Visual Legacies of the Black Panther Party runs through June 10 at the Photographic Center Northwest. Additional panels will be held May 19 and June 9 at the Frye Art Museum.