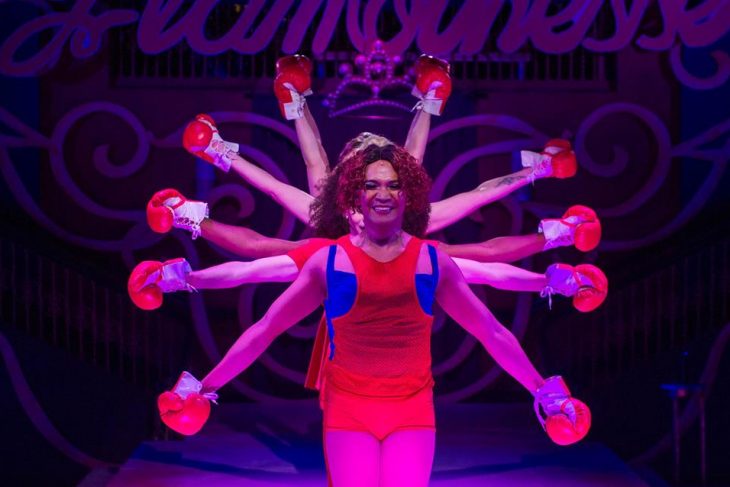 The cast of 'Pageant,' photo by Nate Watters

There are a lot of things going for A Sensible Theatre Co.’s inaugural production, the drag musical Pageant: The cast is versatile and funny, Reiko Huffman’s scenic design makes great use of ACT’s somewhat difficult Bullitt Cabaret space, director Charlie Johnson mostly finds equilibrium between the show’s earnestness and its (very gentle) satire. The unanswered question is why. Pageant, written by Bill Russell and Frank Kelly, with music from Seattleite Albert Evans, premiered off-Broadway in 1991 and has apparently been moldering in an evening gown box ever since.

There are jokes about the six beauty pageant semi-finalist characters—all played by men—having “all the right equipment.” There are over-the-top beauty-product testimonials by the contestants (troweled-on foundation, edible lipstick) and somewhere, a hack ’90s comedian dreams of resurrecting an old bit: Gals and their makeup, amirite? The energy of the few full-fledged musical numbers comes more from Johnson’s choreography than the songs themselves. Updates meant to modernize the show, like the host’s admonition to the TV audience to text in their votes, only accentuate its quaintness.

Good thing the cast is clearly having fun with these parts, vying for the title of Miss Glamouresse in the pageant sponsored by the fictional beauty company and its “virtually asbestos-free” products. The crown is awarded by a handful of audience members who sit in the designated judges’ seats during the show, so every performance’s ending is theoretically different.

It’s not exactly a fair competition. Some of the contestants get much better material than others, like Miss Deep South (Nicholas Tarabini), who ably performs a ventriloquist act with two puppets as her Antebellum-era great-great-grandparents, and Miss Bible Belt (company co-founder Paul Flanagan), who struts her bitchy hypocrisy in song and dance. As Miss Great Plains, Clayton Cooper nails the guileless Midwestern accent and golly-gee wholesomeness in an impassioned plea for environmental care: “You sing ‘America the Beautiful,’ oh, yes! Even as you make me America the Ugly!” (Another unanswered question: Why didn’t those opening-night judges vote for Miss Great Plains?)

Not that the others aren’t equally enthusiastic. Miss Texas (Andrew Murray) tap dances like the crown is her birthright and Miss Industrial Northeast (Christian Quinto) mauls the accordion with determined fervor. Miss West Coast (Jelani Kee) performs a woo-woo monologue about reincarnation that tries to wring humor out of a gag going on way too long. It doesn’t work.

Much of the show is devoted to these little bits of sketch comedy, with scattered ensemble numbers here and there. The swimsuit portion transitions into the activewear section (charmingly tacky costumes by Pete Rush) and the eveningwear competition includes a serenade of host Frankie Cavalier, played in drag by Helen Roundhill, whose combination of smarm and desperation captures the event’s cable-access-television aesthetic.

When the previous year’s winner (Quinto) is trotted out and has to endure casually cruel comments about her weight and the unceremonious stripping of her crown, Pageant attempts to land a pointed jab at its subject matter. But it’s hardly a coup to point out that a society that enjoys the superficiality of beauty pageants would be so committed to the ritual humiliation of women. (And having men portray them doesn’t really amplify this point either.) Beauty pageants, even though they still exist, are mostly a cultural relic, but misogynistic cruelty has only become more acute. In this era, Pageant smells like mothballs.