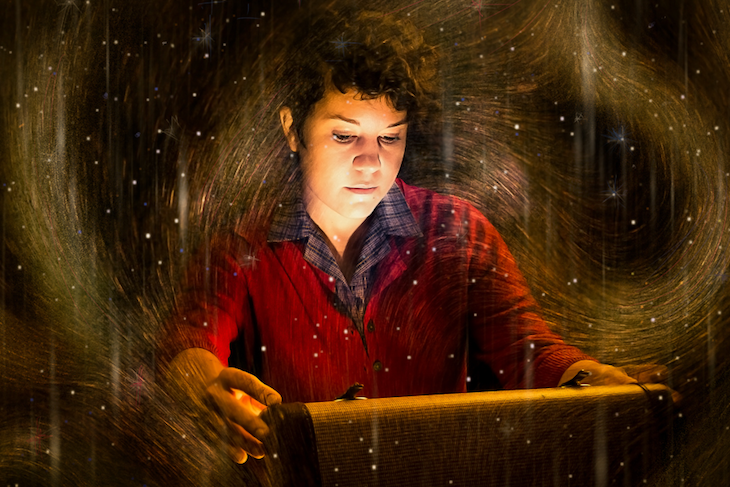 In her one-woman show The Two-Step, Christine Longé brings Edith, a character inspired by her grandmother, to the intimate stage at 18th and Union. Told through first-person memories, the show skips across the decades, spinning the story of a woman who marries right out of high school and gives birth at 20, 22 and 23, before reclaiming her life in her late 30s, divorcing her husband for the love of her life and traveling the world.

The stage is bare, Longé’s only prop a vintage suitcase used mostly as a stool. Sound and movement set the scene for each of Edith’s memories: Carnival music plays and Longé swerves and tips as if people are pushing past her—you can almost see the kids with cotton candy running down a busy boardwalk. Longé is a captivating and energetic storyteller; her smile lights up as she describes riding an elephant in Thailand or seeing her second husband, Eddie, for the first time at a roller rink in 1975. Sometimes a recollection sends her twirling across the room. The show’s roots, in stories told by a lively old woman to a beloved granddaughter, are evident.

The memories tell the well-trod tale of the 1960s wife and mother, frustrated by societal expectations, and the hard-won freedom of defying these expectations in the ‘70s and ‘80s. When she divorces her negligent, unloving first husband, Edith is abandoned. How could you? ask her parents, her children, her friends. She answers without apology, “How could I? I did.”

Showing a woman in middle age having dreams and desires and then acting upon them is powerful. Our media is full of young women discovering themselves or pushing boundaries, but rarely is a woman in her 50s given center stage and presented as a passionate human, especially one who chooses her own happiness over the desires of her family and children. In one moment, Edith recalls a childhood memory of spying on her mother, who had dreamed of being a movie star, looking in the mirror. “I want to know who she is,” says Edith, reminding us of the lost inner lives of generations of women, swallowed up in an era when they were defined by their relationships to men.

The material gets a bit repetitive as the travel stories—Kathmandu to Switzerland—blend together, though they add up to an impression of a truly accomplished traveler. A recollection from Saudi Arabia is the most striking, wherein Edith discusses a beautiful, generous culture as well as the restrictions she experienced living there as a woman, not allowed to drive or ride a bike. She finds some freedom through her gender’s invisibility—knowing no one would bother her, she was free to walk anywhere she pleased without fear. She notes, however, that as a white Westerner, she was allowed to leave that invisibility any time she chose.

Her privilege is handled with slightly less grace in a story about obliviously sitting in the “colored section” of a hospital cafeteria and declining to leave when notified of her mistake. While it may be a true story from Longé’s grandmother’s life, it smacks a bit of a white savior looking for pats on the back for being ahead of her time, without acknowledging that Black people didn’t have the same leeway to make that kind of mistake, nor the privilege to be oblivious to oppressive rules.

Longé’s Edith is a remarkable and admirable woman, but as far as characters go she’s a little too perfect. The one exception to this is Edith’s constant monitoring and exacting memory of her own weight. With every story, Edith notes her precise weight at the time, pleased by her trim 117-pound frame at marriage, disappointed by her 140 pounds later in life. The equation of thin to good is a tired one, but it’s the only part of the play that reveals Edith’s idiosyncrasies, her insecurities and failings. The audience laughs at every weigh in, because it’s in these moments that we see her as most real, and most like us. More development of Edith’s quirks, be they physical or psychological, would elevate Longé’s portrayal beyond a loving homage into a more specifically defined character outside of Longé herself, who acts similarly effusive and animated in her pre- and post-show talks.

The Two-Step is a heartwarming story of a woman who led an unusual life, while reminding us of the not-so-unusual desire for more felt by generations of women. The show was particularly meaningful to my mother, who lived through the women’s liberation movement and was thrilled to experience this particular story with me. Oral histories are often how we communicate across generations, and Longé’s engaging method of storytelling feels like an enhanced oral history: using lights, sound, movement and poetry to preserve the life of an incredible woman through our collective memories.

The Two-Step runs through Sept. 30.