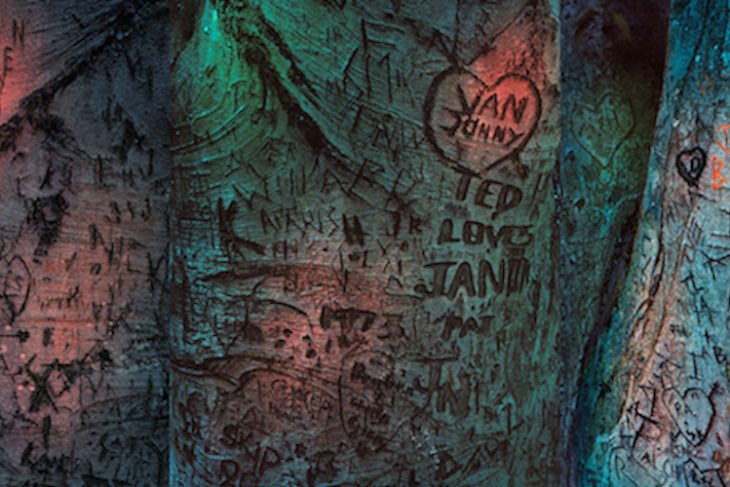 For years Seattle-based book publisher Minor Matters has produced volumes of artist monographs via a crowdsourced platform that sends books to press once a minimum of 500 books have been pre-sold. The latest forthcoming title is a deviation: In addition to a hardcover with some 40 photographs, Eirik Johnson’s PINE includes a 12-inch vinyl album featuring music by artists from Seattle and beyond, including Johnson, DEDE, ELIA, NEWAXEYES, SassyBlack, Tenderfoot and Whiting Tennis.

Johnson is a photographer and currently the Programs Chair at Photographic Center Northwest, but he dabbles in all kinds of multimedia. A self-proclaimed obsessive when it comes to projects, Johnson has become fixated with a peculiar kind of graffiti: messages carved into the aging bark of trees, his photographs of which will be reproduced in PINE along with music inspired by them. I caught up with Johnson to unearth the obsessive aspect of his project. 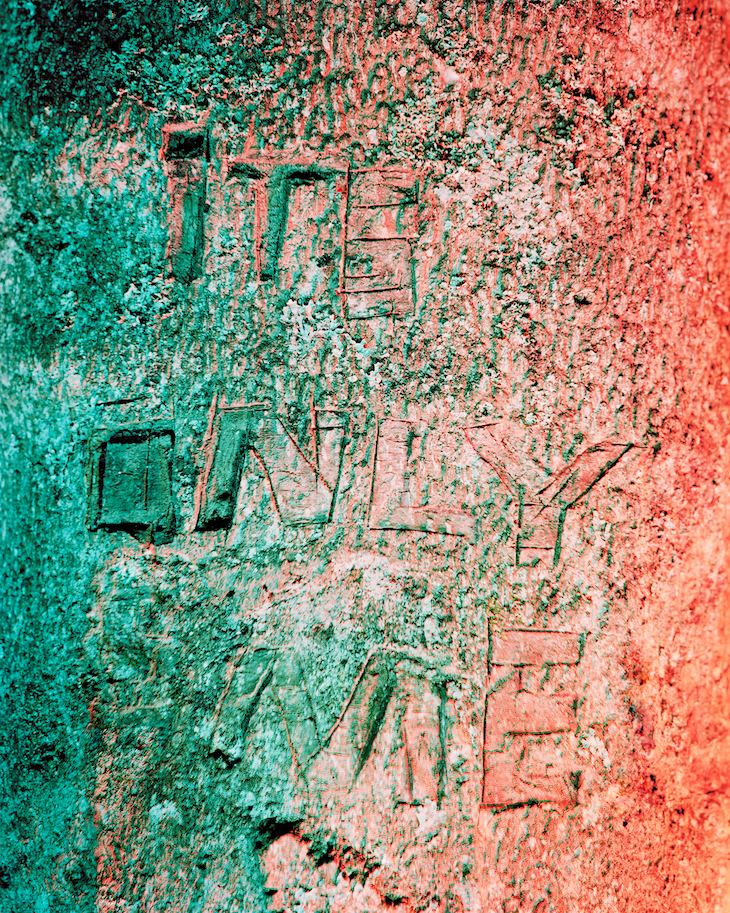 How did PINE begin?
The project began on a nature walk in the wintertime with my son in Carkeek Park. I’m coming around this bend with a flashlight in hand—it was dark, like January at 4:30 in the afternoon—and the light fell upon this tree, onto this carving. The way it was illuminated, it was this beautiful aquamarine twilight red. It said “I LOVE LEANNE.” I was struck by the importance of the statement. In this romantic, luminous aquatic light it made me wonder: Who’s Leanne and who loved her? I wanted to follow this thread, so I started looking for tree carvings everywhere, the stranger and more esoteric the better. Another one I found was a carving that said “THE WILD WOLVES SURROUND YOU” in giant, blocky letter and I was like, oh my god, what does that mean?

Where was that?
That one I’m not gonna tell where it is! It’s in the Northwest. I did some research and it’s a lyric from a Bon Iver tune. It was really interesting to me that a lyric would stick with someone enough for them to carve into a tree. Then I found another that just said “THE SMITHS” and one that said “I MISS KURT.” It began reminding me of when I was a teen. I was really into mixtapes. I would make them for girls I didn’t know how to talk to, but a collection of songs can hit the note, can say what I couldn’t quite say. That was around the same age you’d go meet somebody in a ravine, like around Interlaken. Reminiscing about that era and the mixtapes, the ravines, the trees all kinda got me thinking about the connection with music. 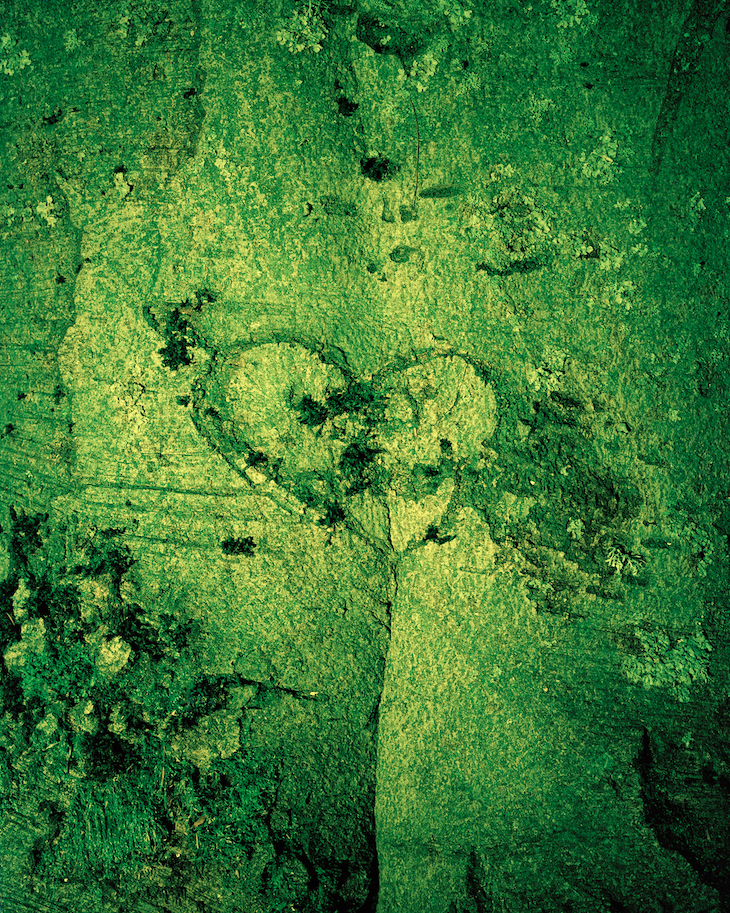 Are the carvings all from around here?
Most are from the PNW and the Los Angeles area. Sure enough, LA has a vast tradition of tree carving along the LA river, in Elysian Park, along Rodeo Drive, everywhere, so I’d go hunting, usually at night.

And you’re illuminating these with flashlights and fire?
I started with a gel filter and a flashlight, then I became obsessed with sparklers—particularly this red phosphorescent sparkler that makes a saturated, rich red light. The photos are long exposure, maybe four to eight minutes long each. Sometimes I’d crumple some newspaper and light it on fire so there’s a flame-like light cast on one side. Other times I’d let the thing expose for a half hour under the light of a full moon. I was experimenting with light [that] embodies my emotional connection with a given carving.

It’s much more performative than what you typically do. Why’d you go that route?
I think it was because of that initial emotional response to Leanne. Who was she, why did they love her? I wanted to insert myself into that conversation rather than just make a typological study of these during the light of day. There’s this one that says “ALEX IS NUTS” that somebody carved on a tree that had been hit by lighting. It’s kind of this weird antagonistic thing, so I lit a fire beneath it. It has this volatile look to it. Then it was a matter of figuring out how would music fit into the project.

Have you worked with music before?
I’ve worked with sound but never music. I’ve always played music—I play sax, piano and I sing. I’ve traveled with jazz bands in the past. I started reaching out to musicians I knew or didn’t know but admired. Without exception, everyone I met with was into it. Some wrote songs specifically for certain photographs, but all the tracks were written with the project in mind. Whiting Tennis opens the album with this sort of dark song about his own alienation in response to his height. Lovers come carve their names into his arms, into his chest. NEWAXEYES responded to this triptych of a grove of trees that’s been carved on since the ‘70s. It’s a kind of bacchanal—this meeting place of all these conversations. Their song is made of layered samples, almost like a layering of history.

There’s an archival quality to what you’re doing, yet it’s a complicated kind of archive.
All of my work is in some way or another about markings, or places where there are leftover markings. The tree carvings are almost like a kind of leftover language. I always find the real world more interesting than any world I can devise or come up with, so finding a carving that says “ALEX IS NUTS” on a tree—I would never come up with that.

I’ve always been fascinated by graffiti. It’s one thing to tag or inscribe a manmade structure and another thing to inscribe on a tree. How do you see the difference?
I think it’s important that it’s a tree, not a bench, not a wall. There’s something that’s tied up in the idea of a giving tree. A tree lives longer than us. We imagine it as this sort of stable thing. The way I see it, the tree becomes the confidant of a secret. You’ve whispered a secret into the skin of the tree. It can blister over yet it will remain. You may forget it but the tree will not. The tree is a living thing and that’s important to me.

Once I found two names carved into a tree: Carly and Destiny. I kept imagining they must be high school friends that ran away together. Who knows where they are now, but the tree still holds that secret. People commit this violent act—because it is a kind of violent act—and left it behind in that tree. And it’s something that is often hidden out of sight, which is opposite of most tags, which want to be seen.

It’s not an ego thing…
It’s an emotional thing.

So what have you ever carved into a tree?
Nothing during this period. The carvings were never meant to be about me.

But before?
When I was a kid I did, but nothing so profound that I would remember it. I do have memories of escaping to the wooded greenbelt we grew up near in Madrona. I think a lot of why I wanted to do this project comes from wanting to revisit those feelings of being able to dip into that landscape and leave something secret behind. And the vinyl—of course that’s another kind of carving as well.