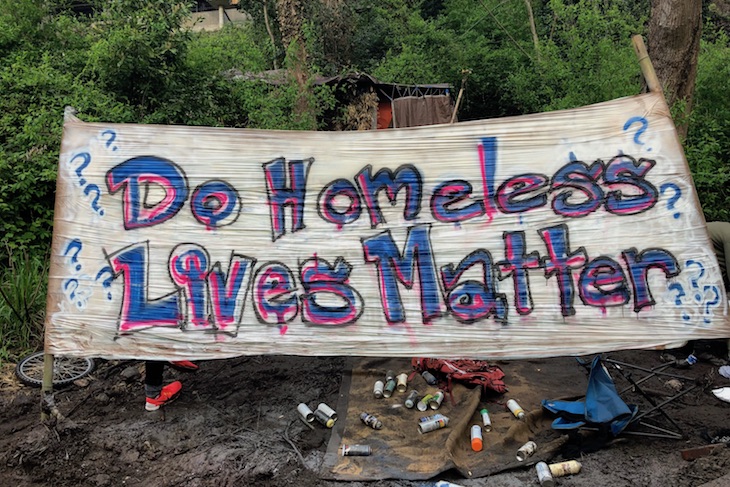 On the afternoon of Tuesday, April 17, the Seattle Police Department stood atop the Orwellian peak of the city’s political landscape.

To sweep a homeless encampment on public land outside the Ravenna neighborhood, members of SPD’s “Navigation Team” cleared a back-channel trail, away from the large gathering of protestors, news cameras and journalists who arrived earlier in the morning. Flanked by yellow CAUTION tape that highlighted a “Do Homeless Lives Matter?” banner, police Lieutenant Jason Verhoff and Sergeant Eric Zerr reassured indignant activists and television news anchors that this was in fact the best of all possible outcomes for the people who once called the encampment home.

Behind the avuncular (but nonetheless armed) avatars of your local police-state, the friendly neighborhood “Navigation Team” compassionately went about the work of destroying the hand-built home of the settlement’s now-roofless residents. It was a performance worthy of the Navigation Team’s award-winning status as recipients of an Excellence Award from the Seattle Police Foundation.

If the work of ransacking residences brought out the best that Seattle police had to offer, it did the same for Seattle’s nascent political Left. Organized by Peoples Party activist Dae Shik Kim Hawkins, two dozen members of Seattle Democratic Socialists of America and Socialist Alternative members had arrived on the scene at 8 a.m. on Tuesday morning, then outlasted the Navigation Team, which departed at approximately 3 p.m. Were it not for the linked arms of Seattle’s leftist flank, the work of destroying the ad-hoc home would’ve been completed before lunchtime. As it was, activists bought the homeless residents enough time to collect their belongings and leave with a semblance of dignity.

A Seattle DSA member who wishes to remain anonymous returned to Ravenna Woods a day after the protest to provide food and medical support to the encampment’s homeless residents. They report that Navigation Team bulldozers returned to the scene a day later to complete the work that activists delayed: the work of paving over an encampment that, if history is any indication, will likely be reestablished by the city’s homeless in the near future.

Seattle has been here before—and not just because this is the fourth sweep of the Ravenna Woods. During The Great Depression in the early 1930s, the city’s “Hoovervilles” sprang up like lesions, indicating the cancerous impact capitalism’s crash had on the body politic. In 1932, the now-defunct Vanguard newspaper revealed that sweeps of the city’s shantytowns and Hoovervilles were typically ineffectual, as homeless residents either returned to establish more elaborate settlements or were often forced by City social workers to sign up for charity they didn’t necessarily need or want. Today, for citizens of all socioeconomic strata, housing is still a foundational piece of positive health and quality of life.

To destroy a home is, in many ways, to destroy a life. In their 2016 book In Defense of Housing, urban planner Herbert Marcuse and sociologist David Madden wrote that “housing unlocks a range of social, cultural and political goods. It is a universal necessity of life, in some ways an extension of the human body. While the domestic environment can be the site of oppression and injustice, it also has the potential to serve as confirmation of one’s agency.”

And yet the spectacle of repression—executed by Seattle police acting as enforcers of city policy—was still carried out at Ravenna Woods. When Seattle DSA co-chair Keaton Slansky explained to Sergeant Zerr that the encampment’s residents didn’t want precarious shelters when they had access to their own homes, nearby social workers nodded in agreement. But Slansky’s insights were ignored by police because the actions of the state are not driven by logic and compassion so much as they’re buttressed by force and coercion.

In a heated exchange with Dae Shik Kim Hawkins, Sergeant Zerr declared that the consent of those being swept would have no impact on the sweep’s execution. Zerr’s rhetorical pivot—from insisting that consent was obtained to admitting that consent didn’t matter—indicates the contradiction of a repressive status quo that doesn’t depend on reason. The state will, of course, seek logical legitimacy if it can get it. But ultimately, the dispute between the protestors and the police was not philosophical, but material.

The scene at Ravenna Woods was akin to the case of the wood thieves chronicled in 1842 by Karl Marx. Poor forest-dwellers in the German Rhineland had long collected wood that fell from trees and used it to heat their homes. A repressive law backed by property owners in the Prussian General Assembly suddenly banned the practice, condemning the peasants to freeze and die during the winter.

Working as a journalist for the Rheinische Zeitung, Marx lampooned the law, saying that “the wood-thief has stolen wood from the forest owner, but the forest owner has used the wood thief to steal the state.” For Marx, the wood-theft law was an example of the absurd extent to which government had become a repository for propertied interests at the expense of everyday citizens. “The criminal act of collecting wood does not consist of an attack of the wood as material object,” Marx wrote, “but in the attack on the wood as part of the state system. We should make quite clear that [the collection of fallen wood] does not include harmful results for the safety of citizens.”

Seattle, however, cannot claim that the homeless encampment was a violation of private property. The encampment, like all that have been swept, was on public land. And while other homeless encampments throughout the city are often cited for unsanitary conditions (that the city would remedy if it wished), the residence at Ravenna Woods was relatively orderly and self-contained. A nearby homeowner was comfortable enough with the residents to supply them power directly from his outlet, calling them “good neighbors” who helped keep the area safe.

The concerns about sanitation, safety, child trafficking and drug abuse that are used to legitimize city sweeps amount to a criminalization of homelessness because similar concerns are never wielded to sweep a neighborhood of housed residents. The known scourges of underage drinking and date rape have not been weaponized as a reason to bulldoze the fraternity and sorority houses a mile away from Ravenna Woods in the University District. Fissures in the official logic of city-sanctioned sweeps are passed off as common sense, leaving the average citizen with the sense that there is simply no alternative to the barbarism of dismantling an individual’s hand-built shelter.

In an article about the Ravenna Woods sweep published on April 17, Seattle Times journalist Vernal Coleman used the cheery euphemism “cleanup” six times, obscuring that what actually took place was the decimation of a home. Coleman uses the word “sweep”—which has come to take on a negative connotation in civic discourse—only once, prefacing it with the qualifier “so-called.” Coleman later complained on Twitter about protestors “blocking his access to public property” while remaining conspicuously silent about the fact that this is precisely what police were doing to the encampment’s residents. Coleman is a talented writer who has gone to great lengths to detail Seattle’s homelessness crisis. His reporting on the subject is indispensable. But the slow cancellation of the public commons revealed by the sweeps can infect even the best minds of our generation.

Coleman’s use of pasteurized language to describe the sweeps conforms to what thinker Herbert Marcuse termed “The Closing of the Universe of Discourse” in his 1964 opus One-Dimensional Man. For Marcuse, passive-aggressive rhetorical tendencies that obscure the material tensions of class conflict are part of capitalism’s larger project of manufacturing consent.

“This language speaks in constructions which impose upon the recipient the slanted and abridged meaning,” Marcuse wrote, “[enabling] the acceptance of that which is offered in the form in which it is offered.” In this way, an act of destruction is described as “cleanup;” police who further disorient houseless residents are termed a “Navigation Team;” disenfranchisement becomes “outreach.” Ultimately, class warfare is praised as keeping the peace, as handsome blonde lieutenants charmingly answer questions from local reporters while eviscerating lives in front of eye-catching protest art.

Marcuse suggests a way out of this Orwellian façade. “Remembrance of the past may give rise to dangerous insights,” he wrote, “and the established society seems to be apprehensive of the contents of memory.” He continues: “Remembrance is a mode of dissociation from the given facts. Memory recalls the terror and the hope that passed.”

In the short term, citizens should support a forthcoming Employee Head Tax (EHT) that would raise $75 million dollars of funds for affordable housing by taxing major corporations like Amazon. The public can count on pro-corporate city councilmembers like District 4’s Robert Johnson, who represents the City Council district where Ravenna Woods is located, to sabotage the EHT, making it friendlier to the big businesses that fund their campaigns through lucrative PACs. It’s up to citizens to decide whether this is the best of all possible worlds or a momentary miscarriage of basic human decency.

For activists searching for a political solution to the sweeps, the first step is simply recalling that they’ve happened, and reminding the city that they still do. Again and again and again. Until they stop.

This article has been updated from the original to reflect two corrections: This was not the first direct action by protesters to prevent a sweep, as originally stated. A sentence that mischaracterized Vernal Coleman’s actions at the site during the sweep has also been removed.