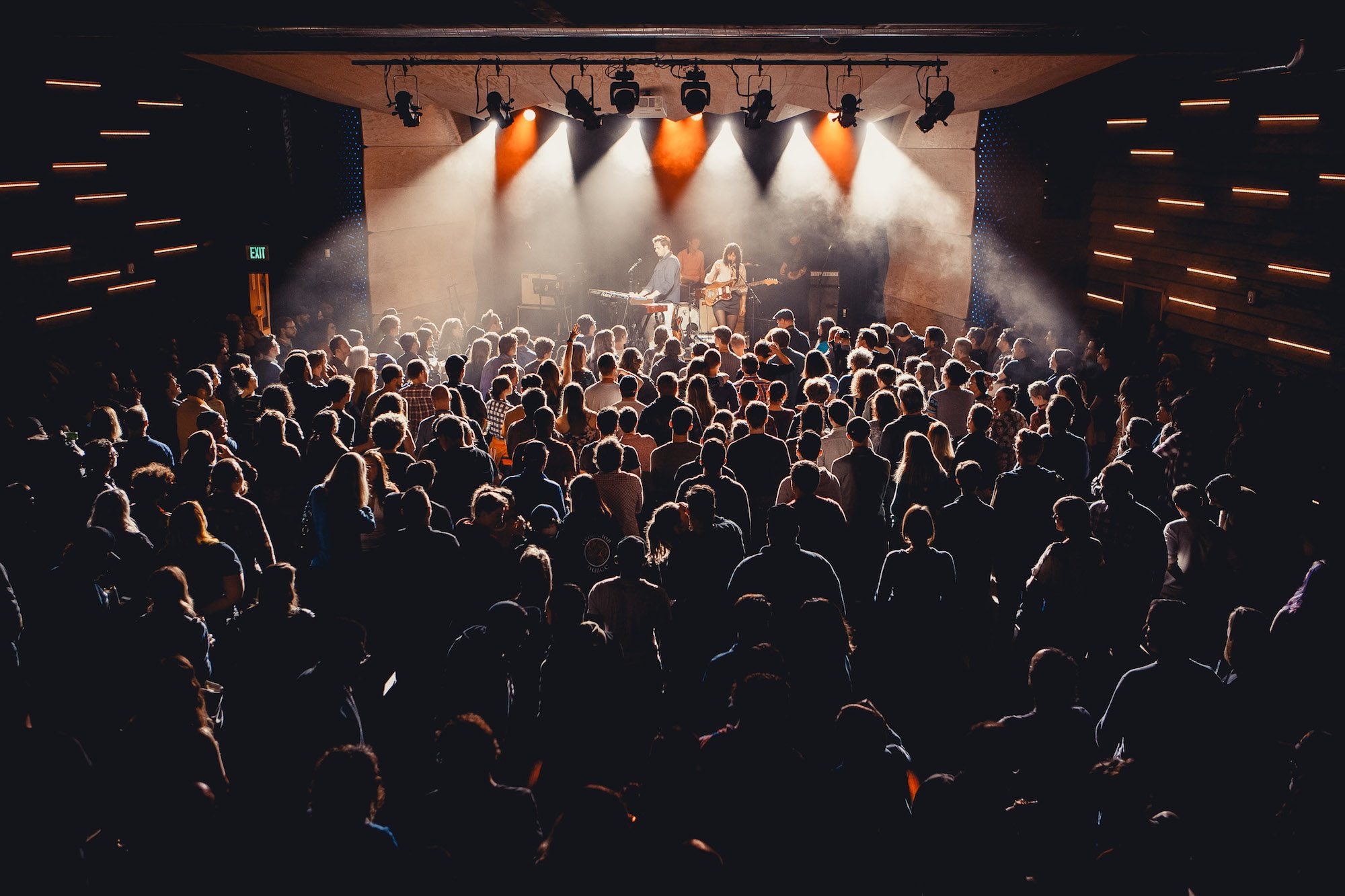 At the center of the city’s beating heart is a brand-new arts facility called Alma Mater, a 22,000-square-foot formerly derelict Carpenter’s Union hall that is now a 500-person capacity concert venue, counter-service cafe and acoustic-music venue, art gallery and sculpture park, all open to the public. By early June it will add a cocktail and tapas bar. Among its winding staircases and wood-paneled hallways, Alma Mater also accommodates private studio space for up to 20 visual artists and a fully appointed recording studio, plus a comfy lounge for resident artists and visiting musicians. Seattle-based design firm Lead Pencil Studio sculpted the homey-industrial-chic look of the entire space; the duo was so enamored with the project that they sometimes operated at cost to ensure the fullness of their vision. It’s basically an enormous playground for art and music planted on the edge of downtown Tacoma.

Between its polished-but-funky appearance, its capacity to handle hundreds of humans at once in both art-making and art-appreciating, and its connection to a diverse swath of Tacoma’s working artists, Alma Mater exerts an extraordinary gravity. In its size, scope and execution, it’s unprecedented in the Pacific Northwest—and perhaps the entire West Coast. It’s on par with national game-changing arts monuments like Santa Fe’s Meow Wolf and New Orleans’ Music Box Village. Fuck yeah, T-Town!

As much as it reps Tacoma homies, Alma Mater desires to function as a testament to the entire Northwest arts community more than hew to any provincial, separatist tendencies. Its core founders—Jason Heminger, Aaron Spiro and Rachel Ervin—all have roots in Tacoma’s music scene but are well traveled and well versed in arts endeavors around the U.S. Its primary investment comes from an individual who operates at a global scale (more on that in a minute). Many of the bands that played the main room at last weekend’s three-night grand-opening party, including SassyBlack on Thursday and Filthy FemCorps on Saturday, are based in Seattle.

During Friday’s three-hour grand-opening show each band—Smokey Brights, SISTERS and Deep Sea Diver—gushed about the arrival of Alma Mater while gazing out from a stage framed by geometric plywood paneling. The venue lands somewhere between Neumos and the Showbox in size and layout, though I’d argue that the stage design, corkboard flooring and high-end soundsystem add up to a soft, warm, velvety blanket of sound that’s currently nowhere to be found in Seattle. Due to relaxed (read: mature) Tacoma liquor laws, tweens and teens were rocking out to the music alongside their adult counterparts, who looked on with local beers in bio-plastic cups in hand. While the sound massaged the ears, the concave stage design drew eyes to the stage and seemed to bring the crowd closer to the bands, making the big room feel familial.

Artists are used to drafty, dingy, shoestring-budget facilities with zero resources, I told Heminger as he toured me around the space. Alma Mater is exactly not that—designed for artists by artists, yes, but with an attention to detail and amenity usually reserved for corporate vanity projects. “What if you could make it nice,” he wondered out loud, “and actually go overboard?”

Primary funding came from James Walton, grandson of Sam Walton, founder of Walmart, and a principal in the Walton Family Foundation. Heminger met Walton years ago when they both worked at a Montessori school in Denver, the former as an agricultural educator and the latter an intern fresh from college. The two bonded over their interest in Montessori education, drafting their own curriculum and devising a nonprofit training program for teachers. (Walton went on to help open the Great Works Montessori School outside Denver, which is not without its critics.)

“I grew up with a union leader as a father and we picketed Walmarts,” Heminger says. “When I first met James it was a rollercoaster ride of emotions.” As someone involved in both education and art, he encourages discussion about top-down patronage and its potential to help or hinder grassroots projects—a discussion that’s now emerging around Alma Mater. “I’m constantly brake-checking the project and the direction that we’re going in and the way that we’re forging the path economically and politically,” he says. “It’s easier to put things in black and white—this person is evil or good—versus a multifaceted, complex narrative that’s harder to talk about: This person comes from a complex situation that’s just like all of our moral and ethical lives.”

Heminger later moved back to the Northwest, planted his family in Tacoma and got back to being a longhair farmer artist musician. In that capacity he soon recognized the lack of resources for artists in the Tacoma area—specifically a facility that could accommodate arts education, production and presentation. When Heminger, Spiro and Ervin began the years-long process of creating Alma Mater, Walton came aboard as investor and “thought partner,” Ervin says. They bought the building in 2015, the second owners after the Carpenters Union opened it in 1954.

“We wouldn’t have been able to accomplish this without that relationship built on trust and friendship,” Ervin says of Walton. “We’re extremely lucky, but [this kind of funding] is out there, and artists need to know there’s channels for that, and the desire is there to help.”

Walton’s involvement allowed them to found AM as a for-profit venture, she says, a choice they made “because artists shouldn’t be beholden to a grant or funding cycle—this scarcity complex of going for the same money. There’s other ways to be sustainable.”

Based on its size and scale alone and even with early-stage investment from a dedicated partner, Alma Mater is a radical enterprise. “We’re testing our theory and hope to become sustainable through the model we’ve created, with the understanding that the process of essentially starting six businesses is messy and will require significant support at the start,” Ervin says. “This is experimental territory.”

In the next few months Alma Mater will begin arts education programming in the cafe as well as their ongoing artist in residence program. Their neighbors at Platinum Reign will launch The Night Show, a monthly late-night variety talk show hosted by Hilltop hero Will Jordan and featuring Tacoma arts and entrepreneurial personalities and live music, plus out out town luminaries from the arts and tech sectors. Darryl Crews, Jordan’s manager and all-around entertainment-industry impresario, is producing; he names Karlie Hustle, New York City Music Manager for Beats 1 and Apple Music, as one of the first guests. Crews is also booking shows for Alma Mater’s main stage, including Jordan’s upcoming EP release.

“How do we use the space to empower Tacoma?” Crews asks. “How do we use our connections from being in the entertainment and music industry for so long? How do we provide a platform for creative people, underprivileged people and people of color, to showcase their work and their insights next to the work of national figures? How do we get creative people in one place? How do we change the way people see Tacoma art—and the way Tacoma sees Tacoma art, music, film?”

Ambitious questions for an ambitious space. Keep your eye on Tacoma to provide the answers.