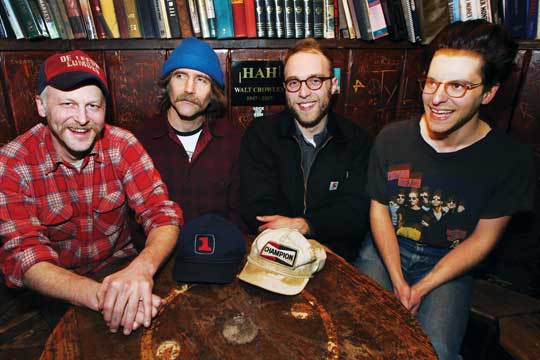 It’s hard to sound as easy as the Sons of Rainier. The band’s self-released debut Down in Pancake Valley is a bubbling brook of an album, flowing with casual charm, effortless yet inexorable. With acoustic guitar and upright bass and brushed snare, plus languid narration by a sweet, lilting voice, its opening number describes the landscape of the quartet’s open-range country folk: “Way out on the Payette River/Past the hills of Horseshoe Bend/Winds change course without warning/Sagebrush for miles on end…” The rest of the album rolls by just as vivid and spare.

Bandleader Devin Champlin has been making traditional acoustic guitar and fiddle music—and as an accomplished luthier in Bellingham, making actual acoustic guitars and mandolins—for almost two decades; Dean Johnson is a longtime Seattle singer-guitarist who’s a fixture of Ballard’s alt-country scene. These two Sons are grizzled, grinning veterans, immersed in music for most of their lifetimes. Bassist Charlie Meyer and drummer Sam Gelband are in their early 20s, young prodigies moonlighting from their roots-rock project Honcho Poncho.

The dedication among the foursome resonates through the natural joy of the music: After the beard-sculpting, trend-riding folk-pop storm blew over, these are the true believers who remain. They came together last year and have thus far played live only sporadically, but the four-part vocal harmonies and instrumental interplay on Pancake Valley mesh as if woven from years of backyard jams and road gigs. It’s the sound of musicians meeting their destiny.

“We don’t have goals,” Champlin says from a booth at the back of Al’s Tavern, an eternal dive in Wallingford. Johnson, sitting next to him during a lull in his happy hour bartending shift, laughs. “Sorry Dean, I don’t have goals. I don’t think any of us care what happens with the band, which is the best way, hopefully. Our only goal is to go out and have an experience. So we just try and scratch out whatever we can in the meantime.”