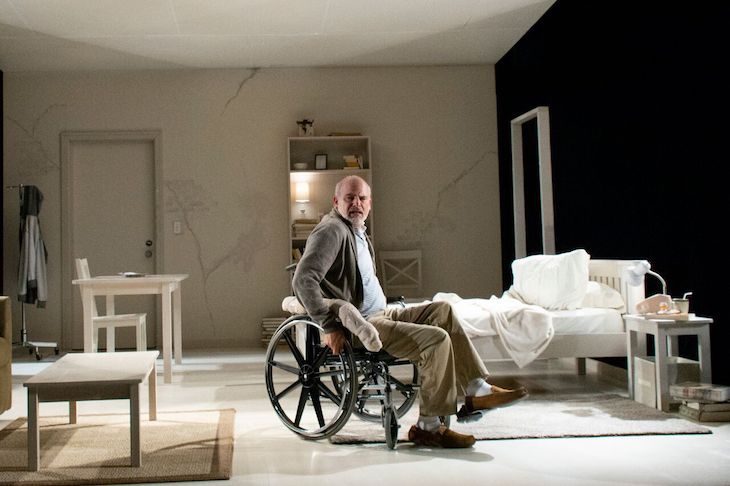 The divide between caring and cruelty is almost imperceptible in The Rules of Charity, a play that begins viciously and then escalates, revealing increasingly distressing wellsprings of anger. The love stories are distressing for other reasons.

Playwright John Belluso, who lived with the rare genetic disorder Camurati-Engelmann syndrome, died at 36, leaving behind a body of work telling stories of people with disabilities. Sound Theatre Company’s production of The Rules of Charity, directed by Leah Adcock-Starr, showcases his distinct voice.

The play can be fiercely didactic, defiantly Brechtian, wildly melodramatic or bitterly funny, but it’s usually working in multiple modes at once. Belluso conditions us to expect this from the very first scene: Lights up on a man who’s just been slapped out of his wheelchair by a woman who goes on to tell him how much she loves him—in her own way.

The man is Monty (Andrew Litzky), a self-taught history buff with cerebral palsy who never leaves the tiny apartment he shares with the woman, his daughter Loretta (Sharon Barto Gouran), whose resentment at having to care for her father is spiraling. There is love here, but there’s also obligation and dependence. She lives off his Social Security checks; he relies on her to make his meals and manage his medication.

Both have love interests. Monty is infatuated with LH (Hisam Goueli), the building handyman who’s more than willing to play Pygmalion with Monty, who dutifully educates him in history and love. They share furtive kisses, Litzky’s performance suffused with full-body longing while Goueli adopts a casualness that shows his mind is elsewhere.

During one of her escapes from the apartment, Loretta flirts with a guy, Horace (Fune Tautala), outside a bar, and he seems nice enough. Then he tells her about how he crushed an obnoxious cat’s skull so he could get some sleep, and Loretta becomes really interested.

These people are fucked-up, but they’re trying hard to be agreeable. Belluso’s dialogue, stiff with Pinter-like rhythm, includes dozens of instances of characters responding “Yes,” offering a veneer of affirmation before they say what they really think.

Monty, who’s been writing a memoir, is reluctantly intrigued when LH tells him he met a documentary filmmaker, Paz (Maile Wong), who wants to interview him. But it quickly becomes evident she’s not interested in his expertise, just his disability. This trust-fund brat is a cartoon (she earnestly gushes about not realizing someone could be both disabled and gay), but her comments about a person needing to earn charity are mainstream conservative ideology. Belluso is pissed at this backhanded, condescending form of care, and rightfully so. It’s easy to forgive the dramatic bluntness.

The second act, set a year after the first, tips into overt miserablism, the horrors of domestic life coming fully to bear on Loretta and Horace. Gouran and Tautala compete to see who can be the most numbly somnambulant. Let’s call it a tie; they both made me feel awful. Belluso is skilled at this mode, but it’s less interesting than the tonal vagaries of the first act, particularly with Monty more on the sidelines here.

Monty’s evaporated agency drives the second act, but Litzky never stops commanding the stage with a performance that embodies both pervasive resignation and guttural howls of rage. He’s yearned for love, and he’s experienced it in different ways from different people. But there have been conditions and retractions. A climactic scene features Monty and a newly self-righteous LH intellectually sparring over the morality of certain types of love. There’s no need for a discussion about cruelty, though. It just roars forth.

The Rules of Charity runs through Aug. 25 at the Center Theatre.