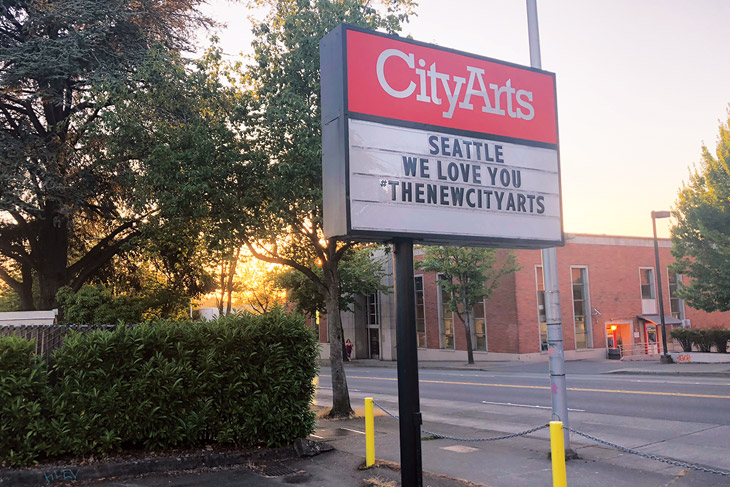 The City Arts staff bid adieu to our longtime Greenwood digs in mid-July. Now you can find us on Capitol Hill.

A surge in big projects and ascendant artists made it clear that we needed to do some kind of big Tacoma story more than a year ago. But how to do it responsibly? Without oversimplifying the changes unfolding in the city’s arts scene? Without glossing over the way art has contributed to gentrification and displacement there? Without being carpetbaggers?

These questions were rolling around our editors’ minds when Margo Vansynghel, clearly on the same wavelength, pitched a Tacoma story. What was needed was a hell of a lot of reporting and listening—and Margo was just the journalist to do it. Once she got rolling, we realized that a single story wasn’t going to do this subject justice; so, what started as a single feature story became a giant package that now includes a series of Tacoma voices, both lifelong residents and transplants, as well as an array of images by Tacoma photographers.

In their words you’ll hear echoes of other cities that have experienced this kind of change, of places where art and artists have given way to gentrification. Not least among these cautionary tales is, of course, Seattle itself. As Seattle’s community organizers and artists scurry to stem the tide of displacement here, people are moving south in great numbers. As Seattle resists becoming San Francisco, Tacoma resists becoming Seattle. And the dislocation only ripples out from there.

In cities across America folks are not only losing their homes, they’re seeing the communities and neighborhoods they built over decades devoured by the locusts of enterprise. Art has historically (and tragically) paved the way for this phenomenon—but perhaps tight-knit Tacoma can lead the way toward an alternative in which art defends the people and their culture.