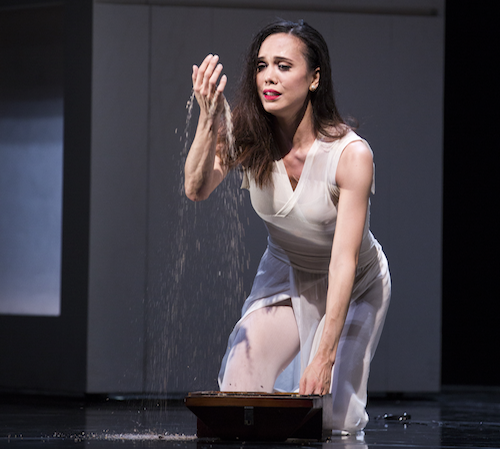 The first program of the evening, Cerrudo’s Little Mortal Jump, is a complicated series of short solos, pas de deux and small group dances set to an eclectic collection of songs by Tom Waits, Philip Glass, Max Richter and others. Newly promoted soloist Price Suddarth opens Little Mortal Jump running through rows of seats in sprawling McCaw Hall and then turns to briefly face the audience before jumping into the orchestra pit. As bright spotlights illuminate the stage in a show of old-school Hollywood showmanship, the dancers perform with huge black boxes that they move around the stage as part of the choreography. Cerrudo’s choreography is illustrative without following a specific plot line, playful at times and deeply emotional at others. The dancers move their upper bodies and arms in ways that, combined with classical ballet footwork, look extremely difficult yet convey day-to-day movements familiar to the least athletic among us: hands folded behind the back in an arching stretch of the back and shoulders; a woman’s excited leap onto her partner’s chest, as if greeting him at the end of a long absence.

Pite’s Emergence, presented third, is likewise brilliant and edgy in its departure from traditional male/female partnerships. A cast of 39 dancers prance, roll and creep on and off the stage under dim red lights, their movements simultaneously twitchy and sensuous. They are a hive of bees: a queen, her many mates and her protective sisters in a provocative balletic display of female power. All of the dancers’ movements are strong and angled, elbows bent at 90 degrees, back muscles rippling in the shadow of the blazing spotlight that opens up suddenly center stage throughout the piece to illustrate the comings and goings of bees from the hive. The intricate choreography in the pas de deux, even when the women are carried or dragged across the stage by their male partners, communicates the shared burden involved in the creation of life.

The brilliance of Cerrudo’s and Pite’s work was marred by the horror of the second piece, Possokhov’s RAkU. This story of RAkU is loosely based on the historical account of a young monk who, in 1950, burned a centuries-old Zen Buddhist temple in a jealous rage. The ballet weaves in a story of a young princess, her Samurai husband, the jealous monk and a small chorus of monks. Described in the program notes as a story of “love and separation, desire and jealousy, violence and grief,” RAkU’s cast mostly delivers heartfelt but boring, slow-moving solos and jerky battle dances reminiscent of a bizarre cross between caricatures of Egyptian pharaohs and Japanese shogun.

The ballet was created and choreographed by former Bolshoi dancer Possokhov and premiered in 2011 in San Francisco. The production’s overall design—original score by Shinji Eshima, libretto by Gary Wang, staging by Quinn Wharton, costumes by Mark Zappone, lighting by Christopher Dennis and scenic and projection design by Alexander V. Nichols—is smart, original and at times beautiful, especially with the use of film projections that work with the music, choreography and lighting to convey the burning of the temple and passage of time. But RAkU’s deployment of gratuitous sexual violence renders it wildly out of date with the current movement toward gender equity.

In one instance the princess, performed on opening night by principal dancer Noelani Pantastico, recoils from the outstretched arms of her husband and wraps her kimono tightly around her body. Instead of evoking sympathy for the princess’s plight, Possokhov elicited applause from the audience as the Samurai forcefully and elaborately removed her kimono in a flurry of brightly painted silk. The skillful stage technique—an invisible hook lifts the kimono off Pantastico’s body and flies it into the air, revealing additional colors and layers in the silk—does not erase the fact that the princess is being de-clothed against her will.

Later, the jealous monk cannot contain his desire for the princess, whom he chases and forces into his arms. She violently struggles away before, subdued, she collapses in shame.

RAkU’s presence in PNB’s otherwise smart, progressive program begs examination. RAkU may have premiered in 2011 to great acclaim, but the recent societal shift that spurred the #MeToo movement requires us to look at not only the most obvious cases of sexual violence but also at the cultural patterns that normalize such violence. Although there is a brief mention of “sexual violence” in the program notes for RAkU, it doesn’t prepare audiences for these displays. The second scene is clearly presented as sexual violence, which is grotesque and unnecessary on its own, but also makes the kimono scene even more troubling in its normalization of partner rape. Rape is rape, and rape presented in ballet is still ballet—which means it’s so beautiful that people clap for it.

Two nights after seeing Emergence I heard author and columnist Lindy West speak at Benaroya Hall, where she said something that aligned perfectly with the problem with RAkU, a problem present in a lot of classical ballet programming today: The current calling-out of rape culture is tearing down male-dominated power structures in politics, the arts and society at large, but we don’t yet have new systems to put in place.

This will take time. Classical ballet is rife with works that glorify the subjugation of women (Swan Lake among the most famous) and perhaps before the events of the last year RAkU wouldn’t seem so appalling. But we’re here now and it’s time to move on.

Pacific Northwest Ballet possesses an intelligent roster of artists and administrators who can lead the charge toward gender equity in the arts. Drop the rape-y ballet. Hire more than one female choreographer to produce work for the entire 2018–2019 season. PNB, please step up. Dance fans, go see Emergence and talk about it with your friends. Let’s build new systems.