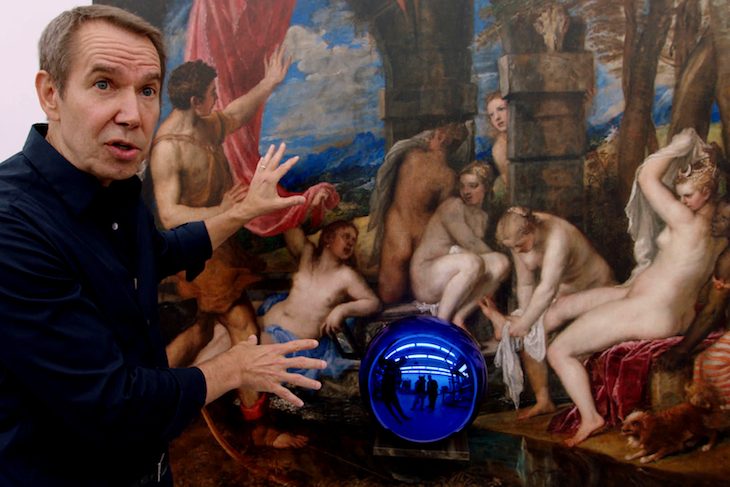 Jeff Koons in front of one of his "Gazing Ball" paintings in 'The Price of Everything,' directed by Nathaniel Kahn. Image courtesy of HBO Documentary Films.

When Leonardo da Vinci’s long-forgotten painting “Salvator Mundi” was auctioned for $450 million last fall, the world’s jaw dropped. The sale was an absolute, expectation-shattering record and a new yardstick for an art market that had already risen into stratospheric heights. In its wake I asked Olav Velthuis, a sociology professor who specializes in the art economy, why prices for top artworks keep going up.

“It’s pretty simple,” he said. “The number of extremely rich people is going up. The art market traditionally fares well during times of income inequality. And income inequality will only rise.”

This nauseating notion forms the backdrop for The Price of Everything, a new documentary that chronicles upper echelons of the frenzied, speculative art market through interviews with art-world insiders such as Jeff Koons, the most expensive living artist, who’s made art out of the deal and vice-versa; or fast-talking firebrand Amy Cappellazzo, saleswoman extraordinaire and executive vice president at Sotheby’s. The movie premiered at this year’s Sundance Film Festival and opens Friday, Nov. 2 at Northwest Film Forum.

The movie, directed by Nathaniel Kahn, will also become available on HBO on Nov. 12—perhaps just in time for Academy Awards nominations? Kahn was nominated twice before, once for his 2003 My Architect: Louis Kahn, about the illustrious architect and estranged father he barely knew, and for his 2006 docu-pic about the life of pianist Leon Fleisher, Two Hands.

“I saw firsthand the fraught relationship between art and money,” Kahn tells me over the phone. “I grew up in a family of artists: My mother is a landscape architect, my sister is a painter, another is a musician. What fascinated me was how we are living in an environment where everything is commodified. There is a whole end of the art market—which does not include that many artists—where paintings sell for millions of dollars. A world with wealthy collectors, many of them members from the high-finance set, who are trading these ‘assets’ around the world. It seems to me that we’re entering a time in which everything in our society is valued for its financial value. We know there’s something dangerous about it, something off. I’m deeply troubled by the embrace between art and money. It’s dangerous and completely emblematic of our age.”

The confusion of price with artistic value is one of the movie’s recurring themes. It’s reflected in its title, taken from an Oscar Wilde line. In Wilde’s comedy Lady Windermere’s Fan, Lord Darlington quips that a cynic knows “the price of everything and the value of nothing.”

In The Price of Everything, it’s a contemporary aristocrat, the nonagenarian Chicago philanthropist and wealthy art collector Stefan Edlis, who utters the words. Edlis is talking about his Jasper Johns 1961 “target” painting, which he bought for $10 million in 1997. When Kahn asks him how much it’s worth now, he doesn’t blink: “$100 million.”

Though Kahn makes space for moments of reflection and other characters, such as that of Larry Poons, who was once a modernist art star  and is now literally “thought dead,” I finished the movie feeling vaguely angry about the picture it didn’t paint. The narrative focuses mostly on the auction market, which, much in the same way that the stock market isn’t the economy, explains only a fraction of the complex financial system of the art trade. Where are the mentions of other art-world problems, such as the museum-industrial complex?

I missed elements of a world I love, too: conscientious gallerists nurturing artists’ careers. Artists showing up for each other. Appreciation—and in many cases also financial support—for scholarship and research.

Mostly, though, I was angry at the crude excesses of a world I love.

This aversion, Kahn says, was exactly his intention. Kahn dizzies us with the superficial antics of the 1% of the 1% to make us realize that we’re the 99.9%.

“We live in a world with increasing inequities between the 1% and everyone else,” he says. “In that way, the art world is emblematic of something larger. This movie is a wake-up call. We need to be the ones to decide what speaks for us and to us. Don’t let the market decide what you see. Let your eyes decide. Your heart needs to decide what’s worth seeing. Ultimately, the market can’t decide what we can love a hundred years from now. We can decide that if we insist.”

The Price of Everything runs until Nov. 8 at Northwest Film Forum  and will be available for streaming on HBO starting Nov. 12.