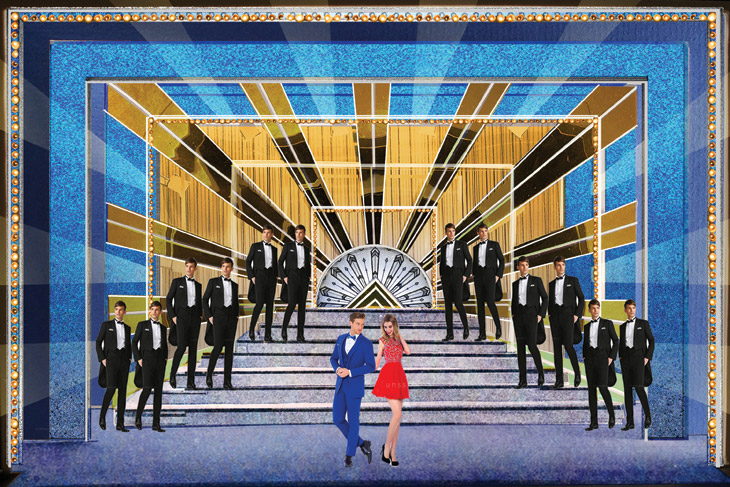 Theater brightens many lives, but for the titular character in Michael Kooman and Christopher Dimond’s new musical The Noteworthy Life of Howard Barnes, premiering Sept. 13 at Village Theatre in Issaquah, that concept is applied both literally and liberally.

“In the beginning, his world is neutral and flat,” says Howard Barnes’ scenic designer Christopher Mumaw. “It’s a three-dimensional world, but everything is bland, banal, uninteresting.” When a wedding invitation arrives at Howard’s cramped New York apartment, from a woman who rejected his own proposal years earlier, he plummets into an emotional tailspin. The next morning, his life has turned into a musical.

That’s why, unusually for Mumaw, his research for this new show began with looking at old shows, diving into the physical paradigms of musical theater from the golden age and beyond. “This show wants to celebrate both the new and the old-school, including ways of thinking about scenery, movement and magic on stage,” he says, before adding this cagey coda to the end of our interview: “Expect the unexpected.”

In a blink, Howard’s bland life transforms into one that’s enticingly superficial—“playing with the archetype of bright, colorful musical theater and exaggerating it beyond even what people might expect,” Mumaw says—and finally into vibrant, real, three-dimensional life.

Another consideration: the imagery of the iconic zoo that is New York City. “The musical kind of harasses Howard,” Mumaw says, laughing. “It’s surrounding him, it’s making him uncomfortable and encroaching on his personal space.” In this New York’s crowded skyline, the buildings—Chrysler, Empire State, Freedom Tower—appear in a perspective that doesn’t truly exist, another reminder of the real-but-beautifully imagined world in which we’re spinning.