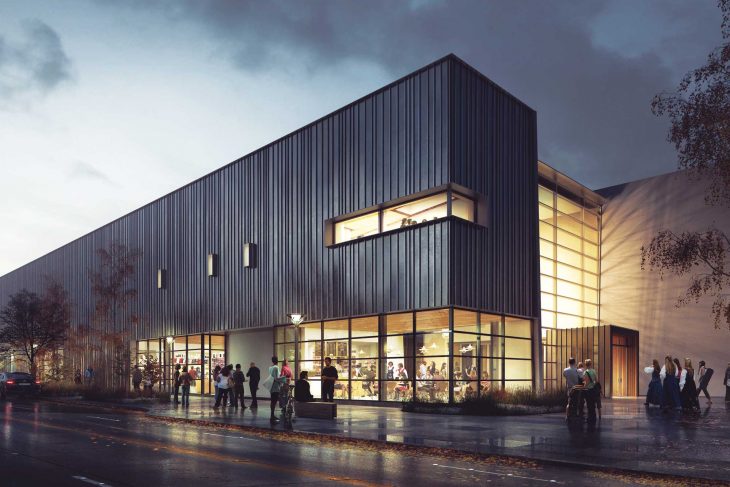 Perched between Ballard’s commercial streets and industrial waterfront, the museum’s exterior is in simple, dark zinc. “It’s very understated on the exterior, and then warm and bright on the inside—a bit like Nordic personality,” says lead architect Richard Franko. Design by Mithun, image by Mir

We’re standing on polished concrete, surrounded by a neighborhood full of vintage shops, coffee houses and liquor stores. And yet architect Richard Franko maintains we’re in the middle of a fjord.

Of course, he doesn’t mean we’re floating on the cold water of a narrow inlet. It’s just that he sees the grand hall of the brand-new Nordic Museum, designed by Seattle architecture firm Mithun with Franko as lead architect, as a metaphorical fjord.

The museum is Nordic down to the smallest details, from the Louis Poulsen light pendants, Ege carpeting and Kone Elevators to the intricately carved wooden door-handles, made by local artist Steve Jensen who hails from a long line of Norwegian fishermen and boat builders. Outside, archipelago-like landscaping reflects more rugged Nordic geography.

Here, outside the hall, Nordic dignitaries will attend the ribbon cutting on May 5 to celebrate the grand opening of the new museum. The reception will kick off a music-filled weekend and a month-long, citywide arts, culture and innovation festival dubbed “Nordic Seattle.” The festival, which features concerts, movies and readings by authors from each of the five Nordic countries, is created in partnership with local cultural organizations such as Northwest Film Forum, KEXP and Seattle Public Library.

Eric Nelson, whose father’s family immigrated from Sweden two generations ago, has two reasons to celebrate. One: the opening of this 57,000-square-foot, $50-million museum project, more than 15 years in the making. Two: the 10-year anniversary of his appointment as CEO of the Nordic Museum—which used to be the Nordic Heritage Museum, established in Ballard in 1980 to honor the legacy of immigrants from the Nordic region, including Denmark, Finland, Iceland, Norway, Sweden and the autonomous regions of Greenland, the Faroe Islands and Åland.

The museum had been leasing a former school building from the Seattle school district since its founding. “It didn’t have much visibility in the neighborhood, wasn’t climate-controlled or very secure. The desire to have a permanent home and a purpose-built facility grew,” Nelson explains while he welcomes us into his new office on the upper floors of the museum, the boats on Salmon Bay visible from his window. “This working waterfront is where the Scandinavian community lived and worked. There were shingle mills that hired a lot of Swedes and Finns, and many people from Norway and Iceland worked in the maritime industry. It’s grounding to be here.”

The museum’s new, more central location brings with it exciting opportunities. In contrast with the former building, the new facility is big and bright. It has safe, climate-controlled storage and exhibition rooms to host valuable and fragile artifacts and exhibitions from important institutions. In its previous incarnation, it would’ve been inconceivable for the museum to welcome a sprawling photo series of islands by the acclaimed artist Olafur Eliasson, on loan from the Menil Collection courtesy of The Phillips Collection; or showcase the dreamy film installations of Eija-Liisa Ahtila. Now their work is included in the opening show Northern Exposure: Contemporary Nordic Arts Revealed, which runs through Sept. 16. Beginning Oct. 26, the gallery will welcome a traveling collection of early Viking artifacts, some more than 1,300 years old.

In addition to having more space for the ancient, the museum will also feel fresh. Instead of walking into replica interiors frozen in time, visitors will now interact with video screens and get a primer on Nordic themes through a sound and visual installation hung behind a forest of real birch trunks, courtesy of the world-renowned exhibition and design planning firm Ralph Appelbaum Associates (RAA). If you don’t know the name, you’ll know their award-winning work for the American Museum of Natural History in New York and the United States Holocaust Memorial Museum in D.C.

“It wasn’t just about moving objects into a new building,” Nelson says. “We needed to become an institution.” That’s why the museum isn’t just a place where you go see objects. It’s designed to be a community place where kids can play in craft rooms, where you can have coffee in café Freya, attend concerts or come research the 77,000 artifacts from the collection. A genealogist will even be on site regularly to assist in research in an upstairs room. A small room next door serves as a recording studio for oral histories.

The new facility also enables the museum to diversify its permanent exhibition, for which it has borrowed more than a hundred objects dating back to the Stone Age, to paint a fuller and more updated picture of Nordic history—one that now also includes the indigenous Sami people, for example. An installation of video screens and real birch trees forms an immersive prelude to the exhibit, which covers 11,000 years of history and mimics the journeys of Nordic immigrants from the 1800s and 1900s.

What’s new: This path will lead them into more recent times as well, “to show the continuing immigration of Nordic people to the Pacific Northwest,” Nelson says. “There’s so much to tell about 20th– and 21st– century Nordic politics, culture, technological innovation, design, social justice and sustainability.”

Yes, “Heritage” has been dropped from the museum’s name for a reason: Nordic culture is not frozen; it moves, like glaciers forming fjords. “We’re looking further back, and further forward,” Nelson says. “So we can focus on what the Pacific Northwest can learn from the Nordic region and vice versa.”

The Nordic Museum celebrates its grand reopening May 5 and 6. Check out the schedule of events, including concerts, group dances and the ribbon cutting, here.