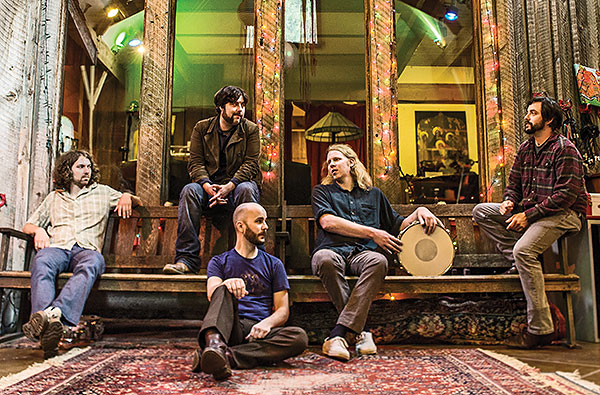 The Moondoggies by Jake Clifford

When Solange made the album A Seat at the Table, fans knew exactly what the title meant. In the context of the artist as a Black woman, the phrase was a demand for recognition and access and inclusion historically denied, a demand to be allowed to make a difference in the world.

When Kevin Murphy sings about a seat at the table, as he does in the song “Cinders”* from the Moondoggies brand-new, fourth album, his meaning is harder to read. He’s a white guy from Everett. His band has made mostly good-times rock ‘n’ roll. But as a songwriter, Murphy is also a deeply aware artist making music in the time of Trump and Parkland and #MeToo. He recently became a father twice over. He’s in a position to say something, and with this new album, A Love Sleeps Deep—the Moondoggies’ first in five eventful years—he’s taking the opportunity to do so. In its prog-rock propulsion and focused lyrics, it’s the most energized and intense statement the band has made.

Throughout their 10-plus years, the Moondoggies have been a humble band, making music wrought from tradition and friendship and the simple joy of singing harmonies and cranking jams. Beyond a sonic aesthetic, their humility fosters a sensitivity that allows them to adapt and change as the timbre of the times and their lives has changed around them. Murphy and I have long talked about the artist’s role in society, and about being white dudes into guitar music in an era when white dudes and guitar music are less relevant than ever. But that doesn’t mean he’ll forsake the original love of making music that brought him and the band this far; rather it means he’s contributing where he can and stepping aside when he can’t.

We spoke on the phone last week and the artist’s responsibility to be true to himself and his times—a time of fake news and prevailing cynicism and a general sense of dread—was all we talked about. “There’s a lot of anger on the record,” he told me, “coming from a place of love.”

Kevin Murphy: It’s like instead of elevating certain voices, everyone wants to crash down and we’re all wrestling in the muck. There’s validity of evil-mindedness. Even in the scientific realm, these bogus studies that some evangelical group wants to push. Tons of voices not being heard. I’ve made progress in discussing feminism with my coworker because we both have daughters. He’s coming from a suburban, “Why do they go so far?” thing and I tell him if you look at a picture of a bunch of people who make decisions, and they’re all white, isn’t that fucked up? Why aren’t there different people at that table?

One of the great things about technology and people having voices suddenly is that it’s right there. And you have that white fragility of people being like, “I thought everything was good! I’m not like that, I don’t hate anybody!” There’s a lot of subtle things we have to be listening and looking for.

I’d be lying if I decided to make something that didn’t talk about that being on my mind. I don’t think it’s someone’s responsibility, but I think it’s a cop-out to not think you can affect something by having a conversation. Or that maybe you’re the person that has an audience that needs to hear it. It’s ridiculous that you’d leave it to specific artists who were in the middle of that struggle. They’re more or less preaching to the choir, so if you have an opportunity to say something to someone who likes Skynyrd or us or whatever, to say this isn’t a political thing…

The “Cinders” song is about casual racism. It was inspired by my wife and her experience having to deal with that [Murphy’s wife is of Peruvian descent]. I brought it up and she was like, “Is that about the time on Whidbey Island?” No, it’s about the restaurant you worked at. It’s every day to the point where she didn’t know specifically. She worked at a restaurant where they were OK with an older lady working there who hated Hispanics. She got teased by them in high school and she’s in her 50s. You’re beefing with my girlfriend because of some bullshit decades ago?

The most screwed over I’ve been has always been by white people. There’s a weird acceptance of this casual racism, and you get it more in the burbs. That “I’m not racist, but…” and you’re like, that is the problem right there, and the fact that they’d be OK with that person is normalization. That’s the thing—all that’s happening is shining a light on things that have been here the whole time.

I get angry. Coming from a place of love, but there’s a lot of anger on the record that we’re still here. Here we are.

Did you watch that MLK documentary on HBO? It’s so relevant. It’s still staring us in the face 50 years later. It’s like a day hasn’t gone by, this message. I felt with the record I wasn’t trying to step into anything that wasn’t coming from a place of personal experience. I understand that it’s complicated to talk about certain things in your art and convey what you want but in a sense it was also kind of easy.

There’s a song [“Soviet Barn Fire”] about our slumlord that I had to sue. You could put him in a room with Donald Trump and they’d hit it off. Talking over each other about themselves. The same kind of person lacking empathy and self-awareness and responsibility and taking advantage of people. I had to sue this guy. He put my family, my six-month-old, in harm’s way. I was yelling at him on the ferry one day, “Who the fuck you think you are that you think you can do this?” A lot of people do. That’s one way you can use art, is to reflect the world back on itself. If you have it on your mind just go for it.

I grew up a white guy and learned about history. Some people never get that opportunity, where someone says, “It’s not an affront, but it’s not about you talking, it’s about you listening and having a humility about things you don’t understand.” That song was kicking around from an older song, and it was like the idea of what we’re talking about earlier: They say there’s no seat at the table, but it’s these voices in the darkness. We should be ashamed of ourselves.

James Baldwin says that if we don’t look directly at ourselves, at America, it’ll be our downfall. Our denial will take us down. I don’t think this is political. It’s just human beings being humble in their faults and wanting to create a place that they wanna live in. In the documentary with MLK they talked about how radical it was to preach nonviolence, to wanna live in a world that’s nonviolent. And even speaking out against Vietnam, how radical it was. That speaks volumes about how sick we are.

So what do you do as a white guy with a guitar? Why do you continue to make music rather than, I dunno, step aside?

Because it’s in my heart. The music is still fun. Not everyone listens to the lyrics, but I’m not gonna not sing about it because I wanna be likable. There’s a lot of things the Moondoggies could’ve done better from a business standpoint—tour constantly, release records every year to stay relevant. But it’s not necessarily good for our health. I’ve seen it. It eats away at people that are vulnerable, whether it’s boozing or burning out.

There’s a lot to be said, and I don’t feel like I’m preaching, but still people might not wanna hear it. As far as guitar music, the last wave of rock music that championed the underdogs was the ’90s Seattle scene. Other than that it’s people having fun or reflecting on their inner world. There was danger in rock ‘n’ roll back in the day and now it doesn’t seem dangerous. It seems flat. The Queens of the Stone Age guy was saying that escapism is underrated. It’s all escapism! What are you talking about? That’s a copout.

I know there’s people talking about shit out there, a lot of great feminist rock, but I don’t hear a lot of music I grew up loving saying stuff that I give a shit about in this moment. The relevance of the time—people just wanna get a certain amount of fans and get well-known and ride on a bus and live their dream. And that’s great. But I’ve already done albums where I grappled with my own bullshit. The last record was confronting booze. I had to grapple with that stuff and get it the fuck out of my world and art is helpful in those times. Things were shaky as it was, and made a wild turn ,and it’s hard not to be wired into that—and if you’re not you’re ignoring an important time in history to be aware and to help. Even if it’s a conversation with a coworker. Whatever it might be.

When I started the Moondoggies I thought I’d already peaked, you know?I thought we had our chance and we blew it and I’d just be writing with Caleb [Quick, Moondoggies keyboardist and singer] and who knows if anyone gave a shit. So I’m gonna write my songs now. And I don’t expect anything, I just wanna create. That’s why we took awhile. Like, let’s take a breath, see what this record is. Write 30 songs, record everything, put something out that we feel like is better than everything else we’ve done.

I’ve walked away from records and four years later was like, I did pussyfoot with what I was trying to get at with that song. But onto the next one. We won’t do that next time. That was a conscious thing for A Love Sleeps Deep—every lyric comes from something deep. I do like nonsensical “Black Shoe” stuff, I like that balance, not taking yourself so seriously—that’s why we called ourselves the Moondoggies. But we can do all of it. We can do whatever we want. This is freedom.

The Moondoggies celebrate the release of A Love Sleeps Deep on Friday, April 13 at the Neptune Theatre.

The lyrics to “Cinders” from A Love Sleeps Deep:

Burn this town to cinders
The streets all look the same
They say they don’t want you
You don’t have a name
Voices in the darkness
Make a man ashamed
Equal in our promise
Just ourselves to blame.