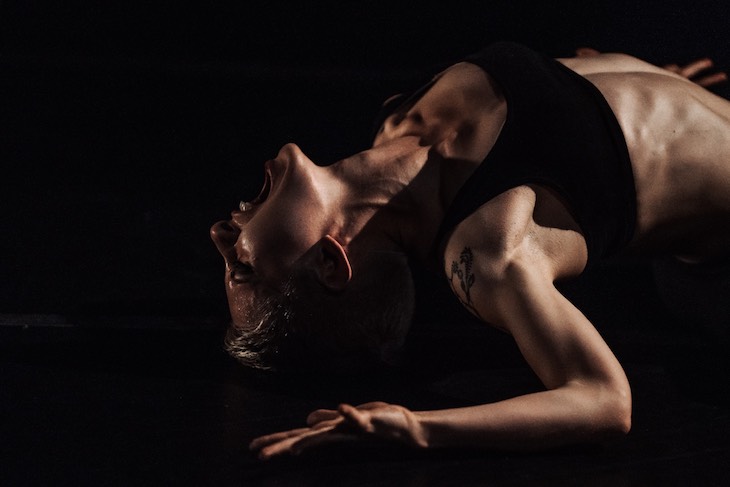 Five short months after moving to Seattle, choreographer Beth Terwilleger has established a new dance company. The gray’s debut show, The Midsummer, ran at Velocity Dance Center last weekend. After spending most of her career as a dancer with Ballet Austin, Terwilleger arrives in the city with ballet chops and premiere performances packed with imaginative, cross-disciplinary dancing. The ambitious work presents a dark revision of Shakespeare’s A Midsummer Night’s Dream, replacing mischievous humor with emotional turmoil.

Bathed in a strip of cool light, Leah Russell’s Puck makes a dramatic entry into the world of The Midsummer, a muscular prowl of deep lunges, powerful shoulders and undulating spine. There’s no playful impishness of the Shakespeare character here, only agony. Russell’s athleticism, intensity and articulation are suited to this role; her performance exudes power yet she seems controlled by unseen forces as she pulls into a severe arch on the floor, balancing on only tailbone and skull as her limbs float eerily above her.

The contemporary orchestral score by Julia Kent intensifies as the four remaining characters enter: lovers Hermia and Lysander; Demetrius, who loves Hermia; and Helena, who loves Demetrius. The stripped-back story involves these five characters only. They spend the rest of the show on the unadorned stage, coming in and out of focus in a rotating parade of solos and duets, each an exposé of character or relationship. The Gray’s five company members include well-known Seattle favorites such as Whim W’him’s Jim Kent along with newcomers Corbin Hall and Melissa Sanderson. Cornish graduates Russell and Sumaya Mulla-Carillo round out a talented group that tackles the technical contemporary material with polished finesse.

Terwilleger’s choreography has a balletic sensibility, and the formal, affected manner—gliding footwork and sweeping legs—feels organic to these characters, a vocabulary well-matched to the antiquated and fanciful qualities we associate with Shakespeare. Animalistic qualities—fawn-like leaping and crawling on tiptoes—give a wild edge that suggests the play’s forest setting on the bare stage. Gestural details like grasping at the face and rapid shaking of fingertips by the throat reveals high tensions and continue the dark, humorless interpretation of the story.

Hermia and Lysander (Melissa Sanderson and Jim Kent) are attentive to one another, with courteous partnering and coordinated movements, but don’t seem passionately in love, perhaps due to the show’s general lack of joy and levity. Helena (Sumaya Mulla-Carillo) literally hangs off Demetrius (Corbin Hall), clinging to his thighs with her fingertips as he walks stoically, dragging her prone body behind him. Or she stands high on his hips as he appears to merely tolerate her presence. Terwilleger’s creative partnering avoids conventional lifts in favor of weight-bearing that reveals relationship. As Puck begins to haunt Demetrius, Russell crawls up Hall’s body, finding footholds in nooks and crannies, draping herself across his shoulders. Despite being the one lifted, she’s in control, slithering around him like a spirit unbound by the constraints of gravity.

Once Puck has enchanted the two men to favor Helena, Helena seems disinterested where she was once so desperate for attention. More confusingly, she then murders both men with a quick twist of the head, their bodies slumping to the floor. Helena gives a sly smile to the audience and the show ends with Puck again, alone and tortured.

Program notes elucidate The Midsummer‘s linear narrative, though they only hint at the final plot twist. Helena’s deviation from the original story is an interesting take but feels unsupported by the choreography. Did she have cruel intentions from the beginning? Was there a psychotic break I missed? Such a dramatic shift from a well-known story requires a foundation to be laid or new information about the character. All the characters are weighted with equal importance until the end, so it’s strange that Helena suddenly becomes so focal.

Terwilleger’s detailed style has a great capacity for storytelling but her compositional structure doesn’t hold up. The piece is mostly a series of short, overlapping duets in similar tone and speed that run together after a while. Little material is repeated—the choreographic equivalent of a run-on sentence, constantly processing new information without time to connect present ideas to past. The unrelenting darkness of the work leaves the audience little capacity to invest in the characters and the emotionally heavy-handed music enforces the mood.

Creating a new interpretation of A Midsummer Night’s Dream that adds to such a storied work is an ambitious undertaking, and ultimately, The Midsummer needs further development. With the piece clocking in at half an hour, there was barely enough time to meet these new interpretations of the characters, let alone interrogate their unfolding psyches. The characters are flat, as though existing only to tell us this somber tale rather than grappling with their own motivations in real time.