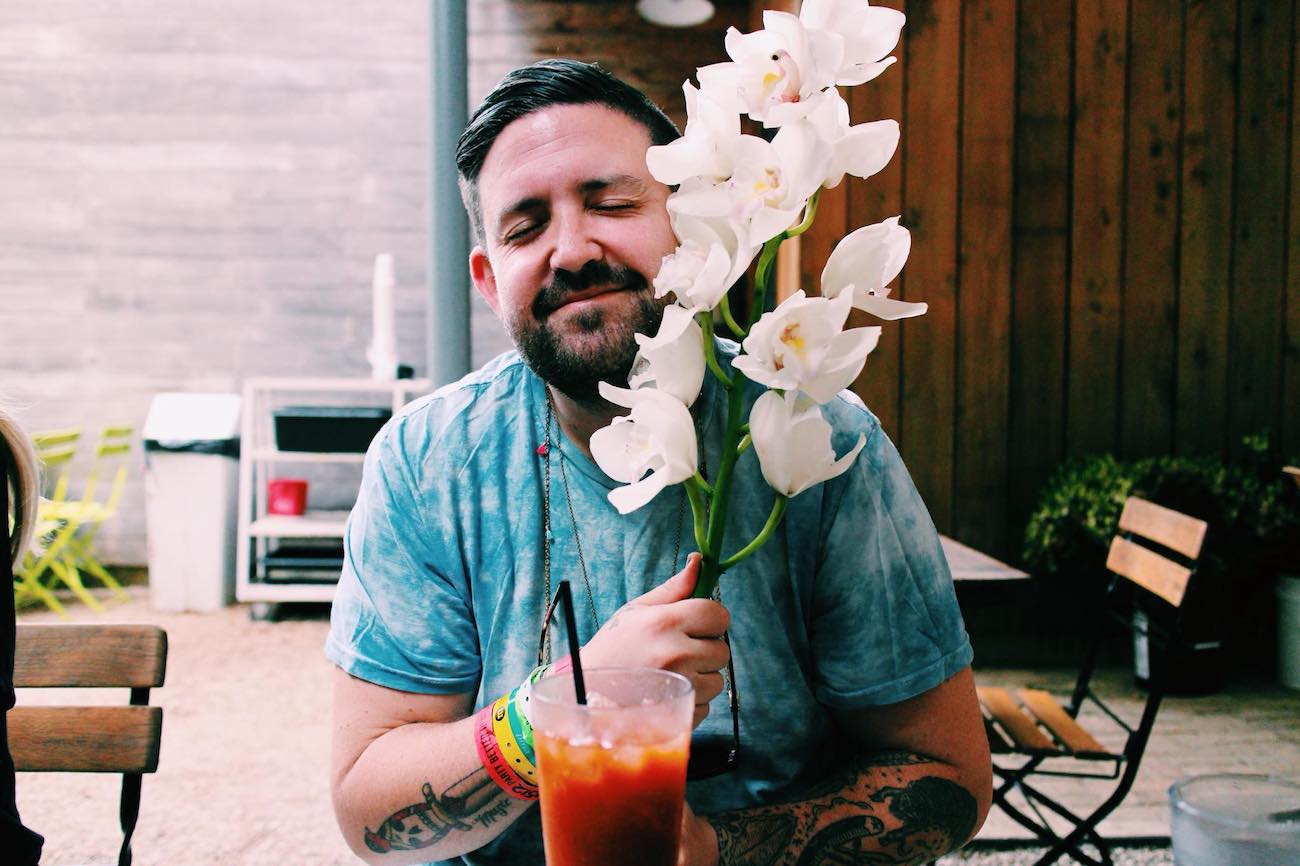 Santiago at SXSW earlier this year. Photo by Estelle Hage.

It’s December 2009 at the Wild Buffalo, the beloved Bellingham concert venue. On stage, a rising Seattle MC named Macklemore is celebrating the release of his VS Redux EP with a sold-out show. Mid-set, he pauses to give respect to the man who made the night possible.

“All this that happens right here, all these people that come into town,” Macklemore declares, his white v-neck soaked with sweat, “a huge reason is because of my dude Austin.” Soon he has the capacity crowd chanting the name: AuSTIN! AuSTIN!

Most people would love the adoration, but not Austin Santiago. Then the Buffalo’s talent buyer, Santiago had made his fledgling music career by toiling in the background so that others might shine, onstage and off.

Growing up in Wyoming, Santiago used an early CD burner to make mixtapes for friends. He’d head to the local music store, buy that week’s new CDs, and comb through each release for the best tracks, “the new-new,” as he called them. When he goes back to visit, some of his friends still have their copies, usually scratched but still treasured.

Santiago moved to Bellingham four days after high school graduation. He dove into the local music scene by passing out handbills for local events. Soon he was putting on his own shows, first at the Calla Loo, a Caribbean restaurant where he worked as a line cook, then at larger venues. Back then the whole operation was a gamble: There were times when he had almost a dozen offers out at once with zero dollars in the bank. Time after time his shows broke even or better.

His taste and his patience paid off, and eventually, Santiago began booking for the Wild Buffalo. It’s no exaggeration to say he gave Macklemore a serious career boost, not only by booking him for Bellingham’s ravenous Western Washington University crowd but also by traveling with him as a tour DJ. He had a covert hand in the journey of Bellingham’s biggest musical export, managing ODESZA’s first tour, years before Coachella was a gleam in the EDM duo’s eye.

He helped another rising act, electronic artist Manatee Commune, transform a college bedroom project into a festival-ready music career. The artist’s first major bump came from Santiago’s vision for Manatee Commune’s buzz-generating 2015 NPR Tiny Desk Contest submission, in which the walls of the musician’s “room” fall away to reveal a breathtaking view of the Puget Sound from Bellingham’s Samish Overlook.

People were calling Santiago the Mayor of Bellingham. But by late 2015, he’d outgrown the place. He moved to Seattle to join Do206, the local branch of a national event listing and production company funded in part by by Adam Zacks, the erstwhile founder of Sasquatch. As VP and general manager, Santiago currently wears two catch-all titles at Do206.

But his proudest achievement might be his own BuildStrong Co., an artist development company he founded in 2005. BuildStrong began with Manatee Commune and other electronic acts and has since expanded to include a wider range of sounds, including electronic-hip-hop wunderkind Chong the Nomad, soul songstress Moorea Masa and party-starting club DJ Ca$h Bandicoot. He’s been intentional about working with a diverse cast of artists, ensuring that his team isn’t a whiteboys club like so much of the EDM landscape.

Santiago turned 33 this year, but he seeks out live music with the thirst of a 21-year-old with a brand new horizontal ID. Consider his itinerary over the last weekend in June: Friday night, Santiago accompanied one of his BuildStrong artists, Cuff Lynx, to their show at Nectar Lounge. I tagged along but called it quits when, after the show, Santiago steered the group onward to Q on Capitol Hill for more music. Saturday night he put on his Do206 hat, presenting the first edition of “Feel Good Inc.,” a Motown-meets-Studio 54-themed party, at Neumos. Sunday he attended the opening of the Special Olympics with his friend Allen Stone, who performed at the ceremony. That was just one weekend.

For every late night out, there’s an early morning in. After sleeping his customary four to five hours, Santiago begins his workday by replying to the between 200 and 300 emails that typically accumulate in his inbox while he’s out soaking up the scene. A given week might find him selling ad space, coordinating ticket giveaways and orchestrating events like this year’s inaugural Protest Fest, a week-long festival that took place at six different venues and raised money for six different progressive non-profits. The day I meet him for our first interview at his new apartment in Capitol Hill, just a short walk from Neumos, he has four meetings lined up.

While some bemoan the chaos in the music industry following the collapse of the pre-internet business model, Santiago relishes the freedom left in its wake.

“There’s so many different ways to have your music succeed,” he says. “It’s fun to just try stuff and get creative.” It helps if, like Santiago, you get bored easily.

I see his creativity in action after Cuff Lynx finish their set. The duo has been offstage for 30 minutes but Santiago has continued gaining steam. Standing on the edge of Nectar’s patio, Santiago leaves multi-instrumentalist Matt Ogle to get a drink at the bar. He returns with an idea for a proper release for Cuff Lynx’s remix of Kanye West’s “Fade,” which earlier that night had sent the crowd into a frenzy. This thing can’t be legally released through normal channels, he says, but would be more like a bootleg. He talks about involving a huge cast of people, an inclusive gesture to help fans feel like they’re a part of things as well as a smart marketing tactic to increase possible shares. Building community feels good, and it’s also good business.

Santiago seems genuinely invested in seeing others succeed, an all-too-rare quality in a highly competitive industry. I get the sense that if smoke signals became the best method for relaying the best new music to people, Santiago would learn that too. He’s essentially shaped his whole career around sharing. It’s like a sixth sense—so much so that he seizes opportunities others can’t even see.

Last year he attended Sasquatch with Paco Mejino, aka DJ Ca$h Bandicoot, who was there as a fan. It turned out that Adam Zacks needed a DJ to play the dance tent on Saturday night. Zacks, who’d developed a mentor relationship with Santiago, asked him about options; Santiago turned to Mejino and asked if he had his USB stick of music on him. The next night, Mejino rocked a crowd of thousands in the dance tent. Reddit exploded with talk of the set. Mejino says people still gush to him about it.

This year, Santiago took things one step further, working with Zacks to book Mejino and two other BuildStrong artists to DJ between sets in Sasquatch’s dance tent all weekend long. Each member of the crew had their moment in the spotlight. Chong the Nomad (aka Alda Agustiano) cajoled a massive crowd into singing Whitney Houston’s “I Wanna Dance With Somebody” at the top of their lungs. Ogle and his Cuff Lynx counterpart Jordan Hatzialexiou elicited yet another frenzied response with their “Fade” remix. And Mejino relived the high of his first set the year before, this time as an official performer.

As for Santiago, he was watching from the side of the stage.