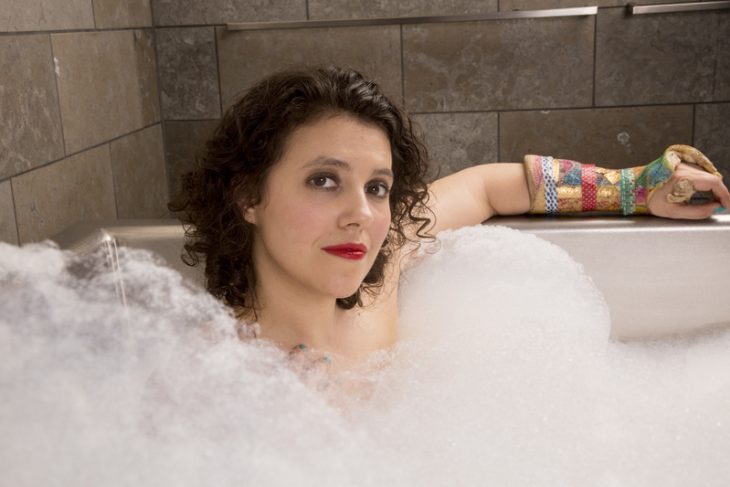 Nothing creates instant intimacy like tucking seven strangers into an average-sized bathroom. On the evening I see Broken Bone Bathtub, the set is the white porcelain bathroom in a charming Montlake residence where New York artist Siobhan O’Loughlin waits in the bubble-filled tub, casted arm carefully held above the water.

As soon as we’ve settled around the tub on little stools, O’Loughlin dives into the story of the bike accident that led to her broken hand. Like a friend gabbing over a glass of wine, her effusive stream-of-consciousness monologue welcomes us into her inner circle, as if it couldn’t be more natural to be two feet from a naked stranger.

Her narrative meanders organically, spinning off into tangential memories before re-centering on the main thread. She recalls a shower taken with girlhood friends after a food fight when she asks one of us, “Have you ever taken a platonic shower?” This person had, on their last trip to Vegas. This format of storytelling continues, O’Loughlin interrupting herself to ask a related question: “Have you ever broken a bone?” “When was the last time you held someone’s hand?” She describes her bicycle collision in New York City, lying there in the street and hearing the other cyclist being comforted by her boyfriend. She’s jealous. “Have you ever been jealous of someone like that?” she asks.

These queries and O’Loughlin’s kind, thoughtful follow-up questions create peepholes into the lives of those around me. A vegan, a marathon runner, a high school sweetheart. Stories of caring for a wife who broke her leg in 14 places, the loss of a parent at a young age, a brief adolescent period of self-mutilation. O’Loughlin folds each personal story into her own, finding commonalities between her life and those around her. She read that book, too. She also cut herself for a while. She knows the grief of losing a loved one. Her openness is a bridge between separate existences, a reassurance that we’re not alone in our experiences.

The heart of the show grapples with overcoming loneliness. O’Loughlin admits that she could cover her cast and take a shower, but instead she uses the broken hand as an excuse to reach out to friends with bathtubs, the genesis of this show. At one point she asks an audience member to wash her hair, and observing the tender ritual is a reminder of how much we crave touch. Through recreating the vulnerability of her injury, O’Loughlin invites us into a physical intimacy often reserved for partners or parents, an intimacy that can be hard to find outside those roles in the modern world.

As she’s lying in the street after her crash, O’Loughlin tells us, she has no significant other, no obvious person to call. But she’s cradled by a stranger named Emily who stays with her in her time of need. Her stories and ours, the invitation to touch, our forced proximity in this most private room in a personal home—they’re all part of a metaphorical trust-fall that demonstrates a firm belief in humanity. In probing the intersections between strangers’ lives, Broken Bone Bathtub optimistically asserts that as a whole, people are capable of caring for one another.

Broken Bone Bathtub runs through May 24 in private residences throughout Seattle. It continues in Portland June 6-18. For tickets and more information visit brokenbonebathtub.com.