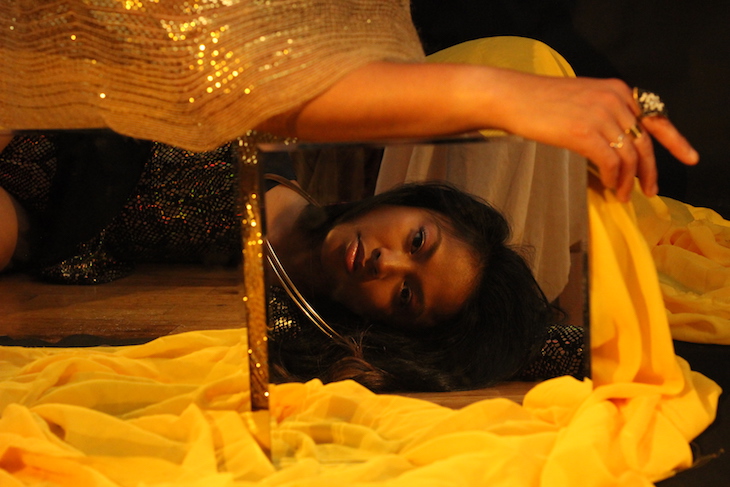 What does the moon wish for?

Imana Gunawan’s dance, music and culinary experience, Moonshine: a cabaret project, orbits around this central question at the Neptune on Aug. 16. One of STG’s Nights at the Neptune, a series of free summer events connecting local art and social justice, Moonshine takes an anthropomorphized view of the moon through music and dance based on an original oral folktale.

For each of these artists’ contributions, the jumping off point has been the story Gunawan developed collaboratively with fellow Au member and costume designer Hallie Scott. In it, the moon decides it’s tired of its endless circling, catalyzing major changes on earth and negotiations with the moon’s dark side.

“It’s a residue from a past project exploring what it means to be in the Indonesian diaspora and exploring ancestry from far away,” says Gunawan, who grew up in Jakarta. “Traveling to different places, there’s always mythology about the moon that teaches us lessons about how the world is larger than we are.”

Though the story grew out of an autobiographical place, it’s now broad enough to transcend any one human experience, especially given the nature of the storytelling. “There’s a difference between writing a story and telling a story,” Gunawan explains. “The way that oral stories get passed around is that the details change, but there are different checkpoints that you hit within the story.”

Another reason for the story to be oral is so that the musicians can respond not just to the folktale’s content, but also the sounds or the cadence of the words. Each musician has created two new songs, which are slated to become a digital album produced by Nic Masangkay. Gunawan curated the groups around a neo-soul influence, but each of the artists brings their own flair. “Donte is more R&B and rap, CarLarans is more purely R&B and Emma is a little bit rock. I really like the contrast of all of them together.”

The dancers (Cheryl Delostrinos, Fausto Rivera, El Nyberg, Randy Ford and Devin Muños) are using the story in a more abstracted way to generate movement, with each creating a ritual for a past self, a future self or an ancestor. For Gunawan, the idea of the moon is inextricably linked with cycle and ritual. “A lot of it is about cycles of death and a rebirth,” she says. “I’ve been dealing with a lot of grief recently so it’s been nice to realize that it comes back around.”

The cyclical nature is also reflected in Scott’s costumes, which dress each musician as a different season. There are collars made of giant crystal formations to represent winter and an enormous dip-dyed floral ball gown for spring, promising an elaborate feast for the eyes that pairs with projections that VJ (video jockey) Amalia will manipulate live.

Perhaps the most important component for Gunawan is the food. “I just like to eat,” she says, laughing. Finding a way to join food and dance was the initial impetus behind the creation of the cabaret, and the soul food-inspired creations of That Brown Girl Cooks! are the perfect fit. When food is served, “there’s a barrier that’s broken already that makes everyone a little bit more relaxed,” says Gunawan, who likes the idea that people can talk, laugh and move around during a show, “to have a different relationship to the stage. Sharing meals and sharing experiences.”

“It’s a place for people to gather and be in community. At the end of the day, it’s about people coming together and eating together and watching a show at the same time.”