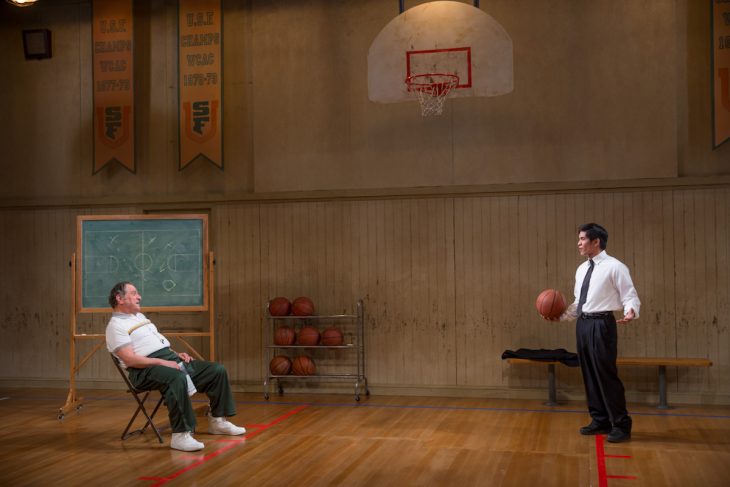 Few things spike a theatre audience’s collective blood pressure like an athletic feat promised on stage, because with that promise we pass out of the realm of pretend and into the realm of uncompromising, observable reality.

Dramatizing an impressive physical display is much like putting a live animal—or, in the case of Jez Butterworth’s mammoth play The Ferryman, a real baby—on stage: Even as we suspend our disbelief in this theatrical world, we still know that the dog, or the baby, or the basketball, doesn’t care about our invented rules. They live in the real world, which amplifies the electric current running through any theatrical production and spares us the imaginative indignity of being asked to believe, for example, that a swaddled, weightless lump is a tiny, living human. Anxiety is exciting. Risk is exciting.

Lauren Yee’s funny new basketball-centric play The Great Leap is many things—deftly detailed, structurally impressive, deceptively weighty and generally delightful—but it isn’t viscerally exciting. It’s under no obligation to be. This isn’t really a “sports play,” with the pulse-raising action-level that descriptor can imply. But it is a play about family, abandonment, determination, self-invention, societal expectation and cultural revolution, topics which are (or should be) just as capable of producing breathtaking moments as basketball is.

Now running at Seattle Rep and presented in association with the Denver Center for the Performing Arts Theatre Company, The Great Leap often stops just short of asking its actors to sink their baskets. It’s a wise practical decision, if a smidge disappointing, because it reminds us time and again that none of this is real, in contrast to the production’s beautifully cinematic staging by director Eric Ting.

Great Leap cuts back and forth between 1989 and 1971, between San Francisco and Beijing, using stark, stage-high projections of dates and city names to keep us oriented. The splendid production design features a set by Wilson Chin, lighting by Christopher Kuhl, sound by Curtis Craig and projections by Shawn Duan. Costumes, excellent all around but most winningly showcased in Manford’s rumpled, rolled-up clothes and Connie’s absolutely perfect late-‘80s gear, are by Valérie Thérèse Bart.

In 1989, it’s all about Manford (Linden Tailor), a cocky, ball-playing teenager looking to land himself on the University of San Francisco’s basketball team or, at the very least, the team going to China in the off-season for a “Friendship Game” against Beijing University. He has to convince Saul (Bob Ari), the USF coach and team connection to China; with a little help from his cousin Connie (Keiko Green), Manford talks and shoots his way on the team.

1971 centers more on Saul, as we flash back to his first visit to China to coach some of the country’s star athletes in basketball, “the only Western sport never banned by the Party on the grounds that it taught Communist ideals.” By his side is a nervous Wen Chang (Joseph Steven Yang), enlisted to help with translation. Idiomatic jokes abound—what’s the direct translation of “fuck shit up?”—and we see the invention of the pick-and-roll.

For all intents and purposes, Saul is overconfident, foul-mouthed, racist America; Wen Chang is diffident, rule-following China, terrified of standing out in a time when standing out got you killed by the Communist Party. “They do not want to choose to throw and then miss,” Wen Chang explains, countering Saul’s exasperation with the Chinese players’ timidity. “It is always your turn,” he growls.

Eighteen years later, things in Beijing are very different. Student protests against the Party escalate in Tiananmen Square, and China, led by Wen Chang and egged on by Saul’s public arrogance about America’s dominance, has learned how to play basketball.

“Eighteen years: That’s how long it takes to replace every cell in your body,” a voice intones at the top of the show. “So, you’ve gotta ask yourself, who do I wanna be in 18 years?”

In 2018, when China-U.S. relations are a cause of great anxiety, Yee’s subtle teasing out of a complex cross-cultural ecosystem through intertwined personal stories is impressive, and her empathetic rendering of “a country that’s been in the dark for 40 years,” rings like a political tuning fork.

Questionable basketball prowess notwithstanding, some unconvincing performances stop Great Leap short of greatness, putting the focus squarely on the hyper-cleverness of Yee’s writing and tipping late narrative reveals into melodrama—including, crucially, the reason Manford has been killing himself since he was a kid to become the best basketball player in Chinatown. Yee’s facility with dialogue is undeniable but, like the shots not taken, Great Leap often cuts away from its most thrilling moments. The show’s final moment, by far it’s most gripping, was so resonant it felt like a beginning as much as an end but was snipped just short of its full emotional impact. And, in a potentially great play as much as a pick-and-roll, precision is everything.

The Great Leap runs through April 22.