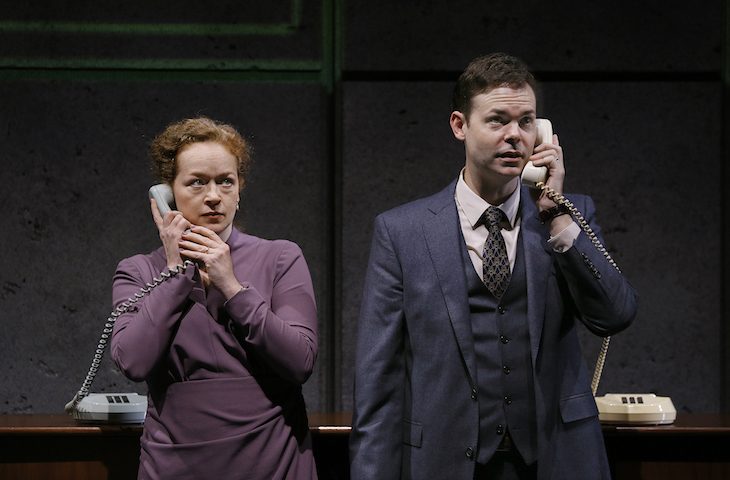 We all remember the handshake. If you were old enough to register international headlines in 1993, the image of Israeli Prime Minister Yitzhak Rabin and Yasser Arafat, Chairman of the Palestinian Liberation Organization, shaking hands on the White House lawn in front of then-U.S. president Bill Clinton is one you’ll never forget. Oslo, now running at ACT Theatre directed by John Langs, tells the story that came before the handshake.

Not the whole story. Far from it. J.T. Rogers framed the play, which won a 2017 Tony Award, around the secret peace talks held in Norway that paved the way for that historic meeting. He decided to write Oslo after being introduced to social scientist Terje Rød-Larsen by Bartlett Sher, resident director of Lincoln Center Theater (and once upon a time, artistic director of Intiman). For this reason, Oslo is very much the peace talks as remembered by the Norwegian diplomats who arranged them, Terje (Avery Clark) and his wife, Mona Juul (Christine Marie Brown).

Terje is the grand thinker, prone to twinges of benevolent narcissism, whose model of gradualism—the idea that opposing factions can compromise on small points, over time, if they focus simultaneously on forming personal bonds—was the foundation of the Oslo talks. Mona is the executor, rational and calm, universally adored, happy to take a backseat as a public servant. She’s also our guide through the play, locating us in time and space as we zip through the hectic nine months during which the Oslo talks took place, and updating the audience with any necessary information.

Through sheer diplomatic will and Scandinavian steadiness, Terje and Mona form their secret coalition. There’s the finance minister of the PLO, Ahmed Qurie (Victor Pappas, charming and dapper), known to his friends as Abu Ala—and as Terje insists, in this chateau 30 miles from Oslo, we are all friends. With Qurie comes Hassan Asfour (Wasim No’mani), always ready with a communist bon mot. At the behest of Yossi Beilin (Mike Dooly), deputy to Israeli foreign minister Shimon Peres, two economics professors from Haifa, played by R. Hamilton Wright and MJ Seiber, begin the proceedings for the Israeli side. Later, they’re joined by progressively more influential (and official) representatives: Uri Savir (Brandon O’Neill, always grin-inducing), an Israeli diplomat by way of James Bond, and later lawyer Joel Singer (erstwhile Seattle actor Aaron Blakely, in a welcome stage return).

Oslo never gets bogged down in the details of political negotiation, because we rarely see the details of political negotiation. What we see is the moments between meetings, the jokes, the whiskey, the waffles. In between the meetings we see Terje and Mona’s machinations as they work with, and around, the governments of Israel, Palestine and Norway, including Mona’s boss, Norwegian foreign minister Johan Jorgen Holst (Darragh Kennan) and state secretary Jan Egeland (Seiber, again), while keeping everything secret from the Americans.

Generally speaking, Oslo exists in a bubble of good intentions, both in play and production. Rogers crafted the play with such dexterity and humor that a political process is interesting—though I find the choice to include video footage, in this case of violence and rioting crowds, only serves to highlight the artifice on stage rather than add real-world stakes to the action at hand. Excellent central performances anchor a potentially unwieldy play, Brown the steady countervailing force to Clark’s more excitable rule-breaker, ready to push on at any cost.

Right now, most people feel so hungry for hope that the story of Oslo is enough to make you salivate emotionally—and dream that maybe somewhere, some thoughtful Scandinavians are helping Democratic and Republican leadership work together by seeing one another as real people. It’s enticing, especially because it’s “a true story.”

Even at three hours and two intermissions, Oslo’s huge amount of information means heavy reduction, and, as Rogers wrote in his introduction to the play, he wanted to write a play, not a textbook. After years of intense research, he said, he threw that ersatz journalism into a blender and wrote a play to capture the spirit of those events, if not the paint-by-numbers facts.

That spirit is intensely inspiring—the tenacity and subterfuge required to bring these two countries to the negotiating table while the official peace talks were stagnating in Paris is astonishing. It’s also, as the title might suggest, intensely Eurocentric, with the Norwegians portrayed as preternaturally thoughtful while both the Israelis and Palestinians are hot-tempered and volatile. This isn’t a comprehensive, balanced look at an incredibly complex topic; Oslo doesn’t sum up the intricacies of the Israeli-Palestinian conflict or try to.

That said, as a white American woman, my understanding of the ongoing Middle Eastern conflict has been shaped by my decades consuming our country’s dominant narrative of the topic. So, while successful artistically, that viewpoint perpetuates the false equivalency that the Israelis and Palestinians were coming to the table on equal footing, a problem well articulated in an open letter to ACT signed by a group of Arab artists and thought leaders. You can read the full text here, and I think you should. I can’t responsibly address the fullness of these complicated issues, nor can I responsibly ignore them and praise Oslo only for its artistic achievement. Oslo is a well-constructed, entertaining and moving play, which only adds to its power to shape or reinforce our understanding of history. Improving our ability to recognize a skewed perspective for what it is, especially within art we enjoy, is a benefit to us all.