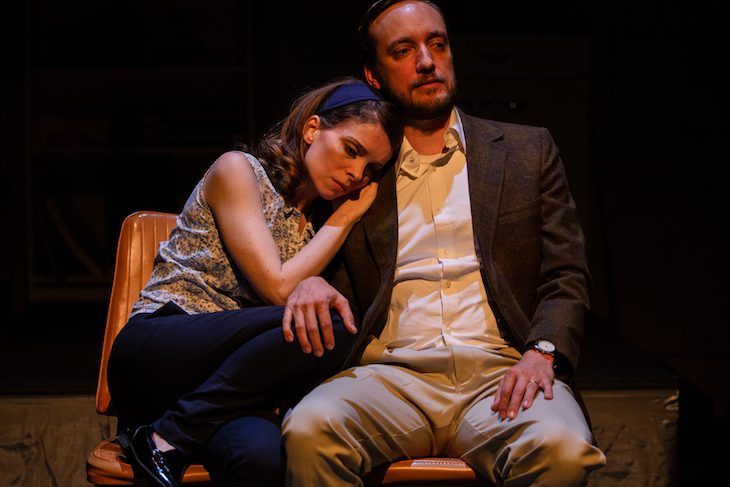 In the opening scene of Paula Vogel’s How I Learned to Drive, we see a predator and his prey sitting side by side in a car. He’s in his 40s. She’s 17. He doesn’t touch her. They don’t even look at each other.

“I’m not gonna do anything you don’t want me to do,” he purrs.

This is a lie, but he’s quite good at convincing her—and us.

Vogel’s 1997 play, which won the Pulitzer and was recently lauded by the New York Times as one of the 25 best American plays since Angels in America, is a stream of memories from a girl about her relationship with her uncle, unfolding mostly in reverse-chronological order. Some of these memories are gut-wrenching and some are fond. Most of them exist in a strange middle ground, where the events are clearly awful but there’s an attachment nonetheless.

This is a difficult dichotomy to pull off, and with it Amy Danneker, the lead of Strawberry Theatre Workshop’s production, does something rather extraordinary. As the teenaged version of her character, Li’l Bit, she’s bright and open—a little playful, a little sarcastic. But as the play introduces younger and younger versions of herself, she becomes increasingly wary and more obviously shell-shocked. By reversing the expected emotional trajectory, Danneker’s performance reveals the layers of self-protecting cognitive dissonance Li’l Bit built up over the years.

A barrier like this is necessary when you have an uncle like Peck (Frank Boyd). All of their family’s nicknames derived from their genitalia, in case there was a question about any boundary issues they may have. An ex-Marine from South Carolina who married Li’l Bit’s aunt, Peck is the kind of guy who’s both open about his emotional sensitivity and non-ironically says he reads Playboy for the interviews. He’s charming and seemingly gentle, and Boyd’s performance is easily ingratiating, touched with a warm Southern drawl and a laconic manner that obscures how intentional his plans are.

Vogel’s almost novelistic structure fills in the backstory of Li’l Bit’s growing up with a chorus of three actors (Shanna Allman, Rachel Guyer-Mafune, Marco Adiak Voli) playing her mother, grandparents, schoolmates and others. These moments help paint a picture, but some veer toward the shticky, like her mom’s advice on how to conceal drunkenness.

The play’s real heart is the furtive meetings between Li’l Bit and Peck, often seated in his car, but also in the kitchen doing dishes after Christmas dinner or in his basement, where Peck photographs his 13-year-old niece. In each one, Peck subtly but consistently moves the line on what is acceptable behavior—and he does it so off-handedly, the shudders of recognition don’t occur immediately. There’s a repeated line about Li’l Bit fitting in Peck’s outstretched hand when she was born that reveals more of its putrid, disturbing core every time it’s spoken.

Directed by Ryan Guzzo Purcell, Strawshop’s production is at its best when it’s just Danneker and Boyd on stage, their conversations playing out in Li’l Bit’s mind’s eye. Danneker’s gaze sometimes lifts, far away from these moments she’s had to relive over and over. A tantalizing glimpse of freedom glints in her eye. And then Boyd speaks, and reality sets in anew.

How I Learned to Drive runs through July 7 at 12th Ave Arts.