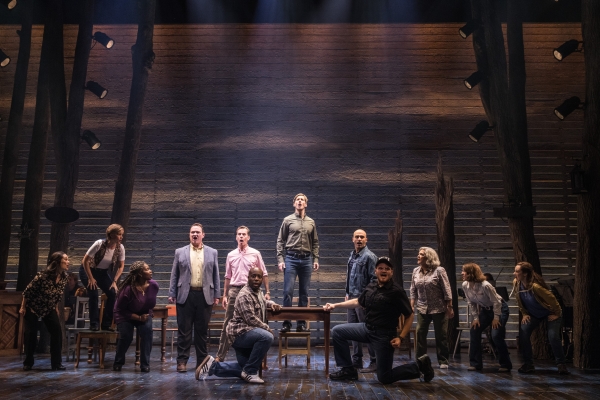 The national tour cast of 'Come From Away.' Photo by Matt Murphy

Is hygge over? The Danish word, generally used by English speakers to mean snuggly wintertime cozy vibes, reached peak cultural saturation back in 2016, but for those who are hungry for more warm, funny, tasteful goodness, the musical Come From Away is back in Seattle and cozier than ever. And unlike hygge, there’s nothing trendy or cool about it. In a good way.

The show felt great nearly three years ago, when the high-energy, emotionally roiling musical by Canadian husband-and-wife duo Irene and David Sankoff played at Seattle Repertory Theatre as part of its rolling world premiere. It opened on Broadway in 2017. In 2018, in a country becoming visibly, vocally xenophobic, misogynistic and racist, it’s a joy to watch the national tour, currently kicking off at the 5th Avenue Theatre, and to soak in a story about kindness as action, not just philosophy.

The story: When U.S. airspace was closed on Sept. 11, 2001, 38 planes were grounded in Gander, Newfoundland; the small town had a disproportionately huge airport, a remnant of the days when jumbo jets had to refuel during transatlantic flights. When thousands of confused, scared people from around the world arrived, the way Gander and the surrounding towns responded was extraordinary—housing, feeding, clothing and caring for all these stranded strangers. They filled prescriptions, found translators, provided phones, opened up their own homes. One tireless SPCA worker insisted on finding the animals she knew must be in the plane’s cargo holds.

Sankoff and Hein were living in Manhattan on 9/11; much of the musical’s dialogue and story elements were taken directly from interviews they conducted in Gander with the plane people, as the stranded passengers came to be known, on the tenth anniversary of their unintended visit. The stories they collected are incredible. Love stories begun and ended, friendships formed, a hockey rink used as a makeshift refrigerator, an old man brought to Canada from Poland as a little boy and told never to tell anyone he was Jewish finally telling his story to a stranded rabbi.

To tell all these interweaving tales of Ganderites and plane people, each member of the 12-person cast zips between characters using the shopworn but effective method of changing hats and clothes. Broadly drawn as these characters are, we get to know some of them: the gay couple both named Kevin (“It was cute—for a little while”), the black man skeptical of Gander’s open-door policy, the Gander schoolteacher and the New Yorker who bond over both having firefighter sons, the first female pilot for American Airlines, Beverley Bass (played by Becky Gulsvig, who lifts the roof off with “Me and the Sky,” Come From Away’s only real solo song).

The rest of the Celtic-influenced score, pulsing with fiddle, Irish flute and bodhran, melds one number into another, more a series of repeated motifs and choruses than standalone traditional musical theater songs. With direction by Christopher Ashley and movement staging by Kelly Devine, the cast moves from vignette to vignette, location to location, character to character, with seamless clarity.

Come From Away is an unlikely Broadway hit: Who the hell would’ve thought we’d ever know so much about the population of a tiny town in Newfoundland, or love a show with essentially no starring roles, sing-able songs, lithe dancers, vocal pyrotechnics or larger-than-life personalities? The star here is the story. Ordinary people in extraordinary circumstances isn’t a new idea, but these people are written with such warm-heartedness that, magically, it doesn’t feel like a gimmick. That earnestness excuses the occasionally simplistic lyrics, sometimes just a repeated piece of spoken dialogue—which, as it’s taken verbatim from interviews, isn’t exactly poetic. But all told, it feels like a story told by your sweetest uncle, jokes sharpened, bad bits glossed over quickly, good bits burnished to a perfect shine.

The line between hokey and heartwarming is razor-thin, and subject to external forces. Were the world a happier place, would Come From Away seem a sillier piece? Perhaps. But as the world won’t magically improve any time soon, I’ll take all the artistic hygge I can get. Come From Away reminds you that people everywhere are basically good, reminds you who you were on that day and the days after. It asks who you would be in such a circumstance and why you aren’t that person right now. Kindness as action. Saying that the world is a dumpster fire is boring. What’s interesting are the people who do what they can to make it better.

Come From Away runs through Nov. 4 at the 5th Avenue Theatre.