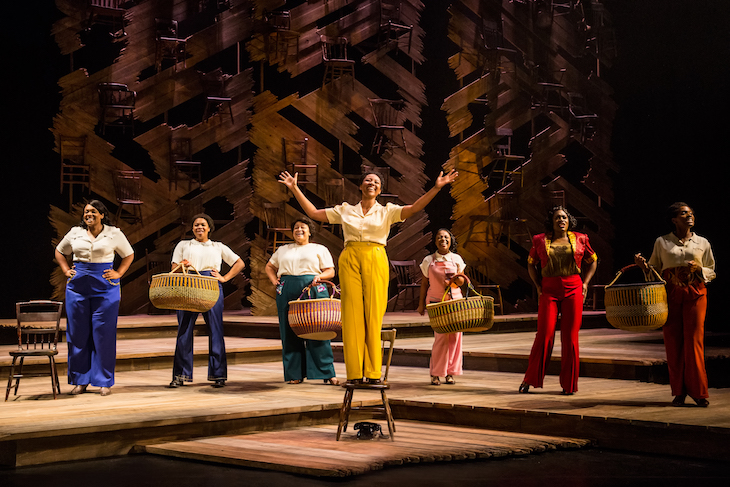 Adrianna Hicks and the cast of 'The Color Purple.' Photo by Matthew Murphy.

When Adrianna Hicks strode onto the middle of the Paramount Theatre in a pair of bright yellow pants, feet kicking the wide hems out with every step, last night’s audience of The Color Purple erupted with delight. As Celie, the miracle at the center of this musical adaptation of Alice Walker’s Pulitzer-winning book, Hicks (and of course, costume designer Ann Hould-Ward) suddenly brought color into a previously muted show—vibrant, visible joy in a world full of hard-earned happiness.

Walker’s sprawling story, set in Georgia between 1909 and 1949, has plenty of color on its own and a splashy telling (which worked against the show’s 2005 Broadway premiere) gums up the works. John Doyle, known for his all-in-one musical revivals with actors doubling as musicians, eschews Technicolor trappings for emotional clarity in this production, for which he was both director and set designer. The streamlined interpretation, which won a 2016 Tony Award for Best Musical Revival, is set against a floor-to-flies backdrop of jagged wood and period wooden chairs, a few levels on the set, and that’s all.

But that’s far from all. The touring cast, led by Hicks, brings incredible talent to bear on this story, which follows Celie from her abusive childhood into—and then out of—an abusive marriage and finally to an independence that changes everyone around her. Narratively, Celie’s story is a painful one, marked by incest, rape, servitude, cruelty, abandonment, violence. But it’s also full of so much joy, female friendship, Black queer love, hope, perseverance and expansive spirituality.

Celie is a huge, demanding role that Hicks shoulders with delicacy and strength—a slight slumping of her shoulders, a small stiffening of her back are all she needs to signal a massive emotional shift.

From almost the moment we meet Celie, the tender young woman is being silenced and brutalized. Her much-wanted newborn children are taken from her. She is essentially sold by her father to Mister (Gavin Gregory), a cruel man who constantly calls her ugly, but through him she meets singer Shug Avery (Carla R. Stewart), the first person to really love Celie, except her sister. Her sister, Nettie (N’Jameh Camara) was her first sustaining relationship, one also taken from her. Sofia (Carrie Compere, a human sparkler of a stage presence with a voice to match) enters Celie’s life in a peal of laughter before she marries Mister’s son Harpo (J. Daughtry). Every one of these female cast members is a star, each with an incredible voice over which they have incredible technical control, all phenomenal performers with finely calibrated emotional levels.

The score by Brenda Russell, Allee Willis and Stephen Bray pulls from blues, jazz, spirituals and ragtime, woven together on a musical theatre framework. The styles blend into a unique and cohesive whole, rife with repeating character motifs—the clever syncopation of gossipy church ladies, Celie and Nettie’s simple harmonies—and show-stoppers like Celie’s 11 o’clock number, “I’m Here,” which is one of the best in the business.

Pulitzer-winning playwright Marsha Norman’s book folds and condenses big events or time periods into single sentences, a clever narrative accordion-ing that lingers when it needs to but never belabors a point unnecessarily, zipping us from one event to the next cleanly and clearly. And without pandering or hamming it up, this show is funny—Celie’s deadpan barbs against the men in her life, Shug’s sexy juke-joint number. I thought the Paramount roof might cave in after Sofia’s walloping smackdown ode to men who would control her, “Hell No!”

In some ways, this Color Purple feels like a musical painting, Walker’s poetic language and painful story applied using all manner of languid strokes and sharp lines in artful collage. The novel, fundamentally for and about Black women, has always been an important star in the literary sky, and this production sets it in the theatrical firmament. It’s about learning to love yourself in a world that calls you ugly, about wringing joy from life, about the revolutionary act that is caring for yourself and those around you. It’s beautiful.

The Color Purple runs through July 1 at the Paramount Theatre