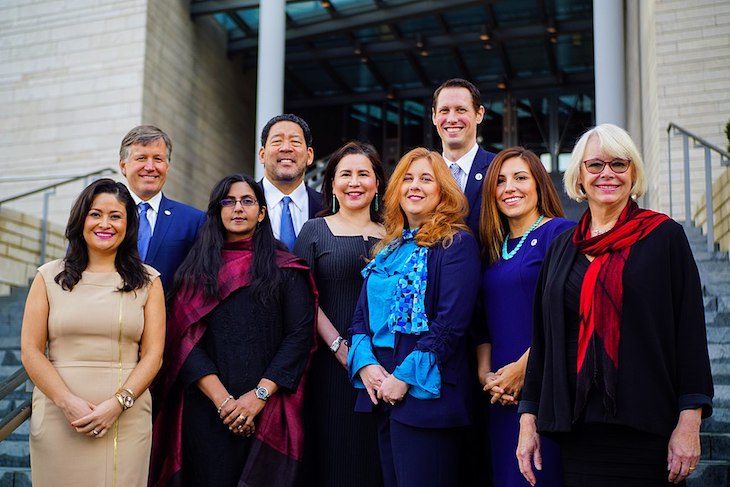 On May 14, Seattle’s City Council secured a historic tax on the richest 3 percent of businesses. In response, area conservatives railed against what they see as the plunge of the Emerald City into pure communism. Their counteroffensive saturated Seattle’s political culture, dimming hopes that the tax could be a platform for future progressive gains. Today’s City Council repeal of the employee head tax (EHT) shows that even progressive wins of the recent past are not safe from the city’s revanchist movement.

The Seattle business community’s fight against the so-called “Amazon Tax” is part of a broader project to use news and culture to curry support for pro-business political sentiment. This is class warfare. It is the outgrowth of an old fight that American conservatives have been waging since the 1970s.

Effective Jan. 1, 2019, the EHT would have captured revenue from Seattle businesses with taxable gross income totaling more than $20 million per year. The resulting funds would’ve been applied to affordable housing and services for the homeless. Depending on who you ask on Seattle’s broadly defined Left, this tax is either a masterstroke of Leninist legislation or a modest reform needed to facilitate a fairer economic order. Either way, socialists like Seattle city councilwoman Kshama Sawant (and from afar, Bernie Sanders) stand on the same side as social democrats like congresswoman Pramila Jayapal and councilwoman Teresa Mosqueda. On the other stand Seattle’s largest corporations and their defenders.

The conservative response to the EHT has not been subtle. In a King 5 interview, Dick’s Drive-In restaurant heir Saul Spady mourned that Seattle is “[no longer] a place where business is done.” Conservative KIRO talk show host Dori Monson has described the EHT as tantamount to “putting a gun to [the] heads” of business owners. Two anti-EHT manifestos have been published in Crosscut and The Seattle Times. Their titles—“Make the Seattle City Council Great Again” and “Seattle, it’s time to take back City Hall”—contain Trumpian allusions that echo a conservative ideology long thought to have no place in purportedly progressive Seattle. The content of these articles reinforces Seattle’s link to the national climate of conservative lunacy.

In Crosscut, Bruce Chapman writes that Seattle’s current City Council—composed mostly of women and people of color—is “almost a mirror opposite of the old-fashioned one” he served on in the early 1970s. The piece also showcases his nostalgia for the days before Roe v. Wade and citywide paid maternity leave. A member of the Republican Party, Chapman compares today’s city government to an earlier one that oversaw racially discriminatory redlining in Seattle housing, and took little remedial action to address rampant gender inequities in the city’s public utilities. He complains that the EHT represents “government by protest demonstration,” ignoring—or not caring—that such tactics have historically resulted in real political gains for vulnerable populations.

Not a fan of social programs, Chapman rebukes the city’s plan to fund affordable education on the absurd grounds that it is “not originally a city government responsibility.” With this line of reasoning, he should also support abolishing the city’s libraries, parks and traffic safety laws, since none of these “responsibilities” is outlined in the original city charter of 1869 (though they certainly were added in the 149 years since). Like all conservatives, Bruce Chapman is mad that time moves on.

In The Seattle Times article “Seattle, it’s time to take back City Hall,” Christopher Kirk infers that the city’s use of space may move on as well. Kirk claims that city government is “trying to destroy the city’s [neighborhoods] of single-family homes,” and vehemently opposes the dense affordable housing that the EHT was meant to help fund. But according to Seattle housing wonk Mike Eliason, the city is currently composed of more single-family homes than at any other point in its history.

Conservatives often accuse others of being fragile snowflakes but are themselves the first to melt under the heat of reason. When he’s not writing pro-business agitprop, Bruce Chapman spends his days as director of the Discovery Institute—a creationist think tank that sneaks anti-evolution teachings into public high schools. This racket of passing off personal superstition as a universally credible viewpoint is part of a conservative long con that goes back nearly 50 years.

In the 1970s, right-wing radicals forced the once-laughable ideas of austerity, supply-side economics and anti-tax theories like the Laffer Curve into the mainstream through conservative think tanks like the Cato Institute and The Heritage Foundation. The books Invisible Hands: The Businessmen’s Crusade Against the New Deal (2009) and Right Moves: The Conservative Think Tank in American Political Culture (2016) discuss the rise of American conservatism. Both texts reference the pro-business “Powell Memo” of 1971; authored by Supreme Court Justice Lewis F. Powell, the letter to American business leaders implored the corporate community to use American media to fight back against what Powell saw as the weakening political standing of American corporations.

In the post-WWII period, widespread prosperity was created through an economic consensus that taxed big business to subsidize a thriving welfare state. The recessions of the mid-1970s presented capitalists with a chance to strike back against this comparatively equitable status quo.

The Powell Memo’s directives manifested in many different registers of American politics and culture, from the formation of the Business Roundtable activist group in 1972 to economist Milton Friedman’s 1980 free-market cheerleading PBS documentary Free to Choose, to the 1984 film Ghostbusters and its anti-government messaging. Before the general public even knew that conservatives were waging a systemic counteroffensive against the liberal consensus of mid-century America, the Right was celebrating its political arrival with the elections of Ronald Reagan in 1980 and 1984.

The conservative counterattack of the 1970s has reappeared on Seattle’s political landscape today. The city’s Chamber of Commerce purchased anonymous Facebook ads slamming city councilmember Mike O’Brien for pushing the EHT. The city’s business community—which once claimed it was too broke to pay the EHT—has mobilized to bankroll an effort to repeal it. The paid canvassers were not above spreading misinformation to dupe unsuspecting citizens into signing a petition that would put an EHT repeal referendum before voters. Public financial disclosures show that a conservative signature-gathering firm named “Morning In America” (after a Ronald Reagan campaign ad) is the campaign’s primary vendor. Saul Spady’s consulting agency has also been handsomely compensated to contribute to its fact-averse messaging.

Jason Stahl writes in the book Right Moves that “in a policy-debating world [in the mid-1970s] where one’s identity as conservative was enough to be heard, speed was rewarded over rigor.” Local conservatives have taken a page from this history book, playing fast and loose with facts and integrity for the sake of political expediency.

In 1973, beer magnate Joseph Coors started a short-lived conservative television news network to sway public opinion in favor of right-wing ideology. In recent years, Fox News has fulfilled that prophecy. Its catchphrase, “Fair and Balanced,” is the rhetorical sham of radical conservatives who want to seem reasonable. Here in liberal Seattle, the Trump-supporting Sinclair Broadcast Group’s takeover of local news stations has instituted a similar rightward slant in nightly news coverage. This media strategy reappears in the present because it has worked in the past.

As in the conservative counterrevolution of the 1970s, the elites backing the business community’s class warfare have made political allies in the middle and lower strata of the capitalist food chain. Working-class white homeowners in the group Safe Seattle have demonized the homeless, which EHT revenue was meant to house. This concoction of corporate cash and “grassroots” political energy is the same combination seen in conservative movements like the Tea Party in 2010 and Ronald Reagan’s presidential campaigns in the 1980s.

Recognizing Seattle’s conservative counterrevolution is difficult because many of its executors masquerade as moderates and liberals. But just as funding from the Koch Brothers determines regressive policy outcomes in conservative states, a corporate paper trail exposes Seattle’s paper-progressives: Amazon and Starbucks made massive donations to the Seattle Chamber of Commerce’s political action committee in the 2017 mayoral election; that PAC spent $525,000 to support Jenny Durkan’s successful campaign. In turn, Durkan has been an opponent of the EHT from womb to tomb, threatening to veto it before it passed, negotiating with City Councilmembers to weaken it when it did, and celebrating the Council’s plans to repeal it yesterday.

“I was impressed with how aggressive the business community was in fighting the employee head tax,” explained Seattle City Councilman Bruce Harrell on the eve of today’s vote to repeal it. Harrell is one of four sitting City Councilmembers who the Chamber of Commerce backed in the city’s 2015 election cycle.

Make no mistake: Whether embodied by corporations or “progressives,” Seattle’s version of the conservative revolution takes the same shape it did nationally. After tolerating social-democratic gains, a business elite that was never not powerful senses a political opportunity to grow its power even further. To do so, it uses the whining of Saul Spady and the calculated outrage of Christopher Kirk to overstate the harm done by the EHT while understating the profoundly comfortable lives of those who must pay it.

At every turn, the already privileged are further privileged, the marginalized are deemphasized, and the powerful grow more potent. The pro-business line of reasoning urges the public to accept a neoliberal governing philosophy that funnels all social goods through the market and its satellites of charities, nonprofits and personal altruism.

Pacific Northwest progressives have long thought themselves insulated from the nasty squabbles of conservative retrenchment from the Tea Party and others. But the story of the employee head tax shows that trees, mountains, and scenic waterways are not enough to keep out the class conflicts that Seattleites associate with other places and other times. In Seattle, it is the rich who wage class warfare. In order to have any chance at winning, the rest of us must first come to terms with the fact that this is happening. This is absolutely happening.

Correction: An earlier version of this column incorrectly attributed the origins of the phrase “Morning in America” to a Ronald Reagan speech.