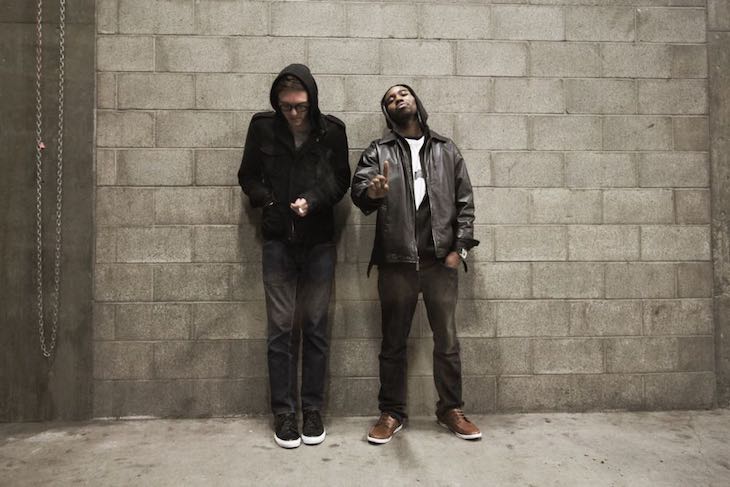 Hot on the heels of our last video premiere comes another striking visual piece, this one by a brand-new, cross-country hip-hop duo called Marlowe. Comprising producer L’Orange, who relocated from Nashville to Seattle late last year, and Wilmington, North Carolina-based MC Solemn Brigham, Marlowe will release their eponymous debut album July 13 on Mello Music. Preview listens reveal a phenomenal pairing between L’Orange’s dense, soul-sample-based beats and Brigham’s assertive flow. Brigham tempers his pressurized vocals with nimble diction, establishing his intellectual authority via remarkably creative rhymes. Transitioning through moods, shades and tempos, L’Orange challenges his partner to contour his cadence to suit the musical tone of each song. These guys have been friends and creative collaborators since college and their longterm chemistry reaps a charged, engaging album.

Among its 38 minutes and 17 tracks (!), “The Basement” is an album highlight, Brigham going so hard on these bars that he sounds like a dancehall MC, and the song is swept up in his forceful forward momentum. L’Orange rightly pares back, letting the song roll on a moody guitar riff and ethereal, wordless backing vocal. As the first taste from the group, it’s a wrecking ball of a song. And it’s accompanied by a gripping, unsettling video, which we’re stoked to premiere today.

“The video is meant to bring you to a place that is not normal,” Brigham explains via email. “At times it seems like everyday life, but that’s the whole point. What’s more terrifying than everyday life?”

Directed by Malcolm Critcher of Tuscon-based Mild West Studios, the vid is basically a surreal Lyft ride through the deviant backstreets of Los Angeles. Solemn drives and raps while his backseat is occupied by a series of passengers that get increasingly weirder until the drive veers into dark, laser-lit abstraction. It reportedly took 80 hours of filming to get right, and the meticulousness shows in the fully cinematic clip. Check it out below and keep an ear out for Marlowe’s album—and an eye out for upcoming live shows (fingers crossed for a Seattle date). Says Solemn, “Damm right you’ll see us preform this. Live band and and all that. Might even bust out some moves with the dance team.”