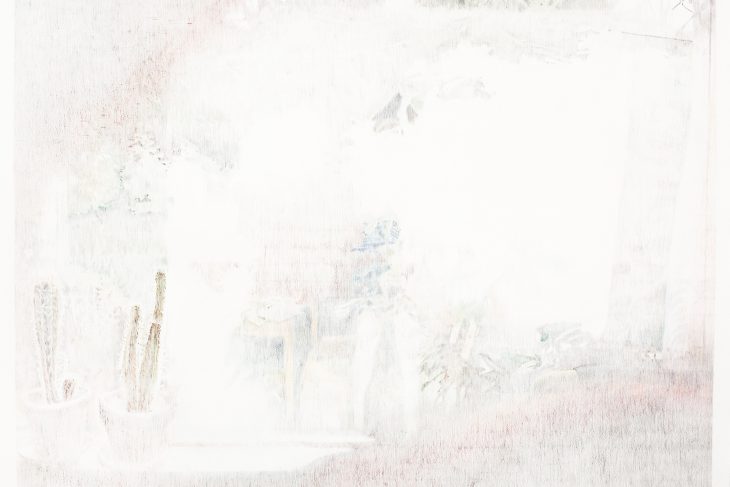 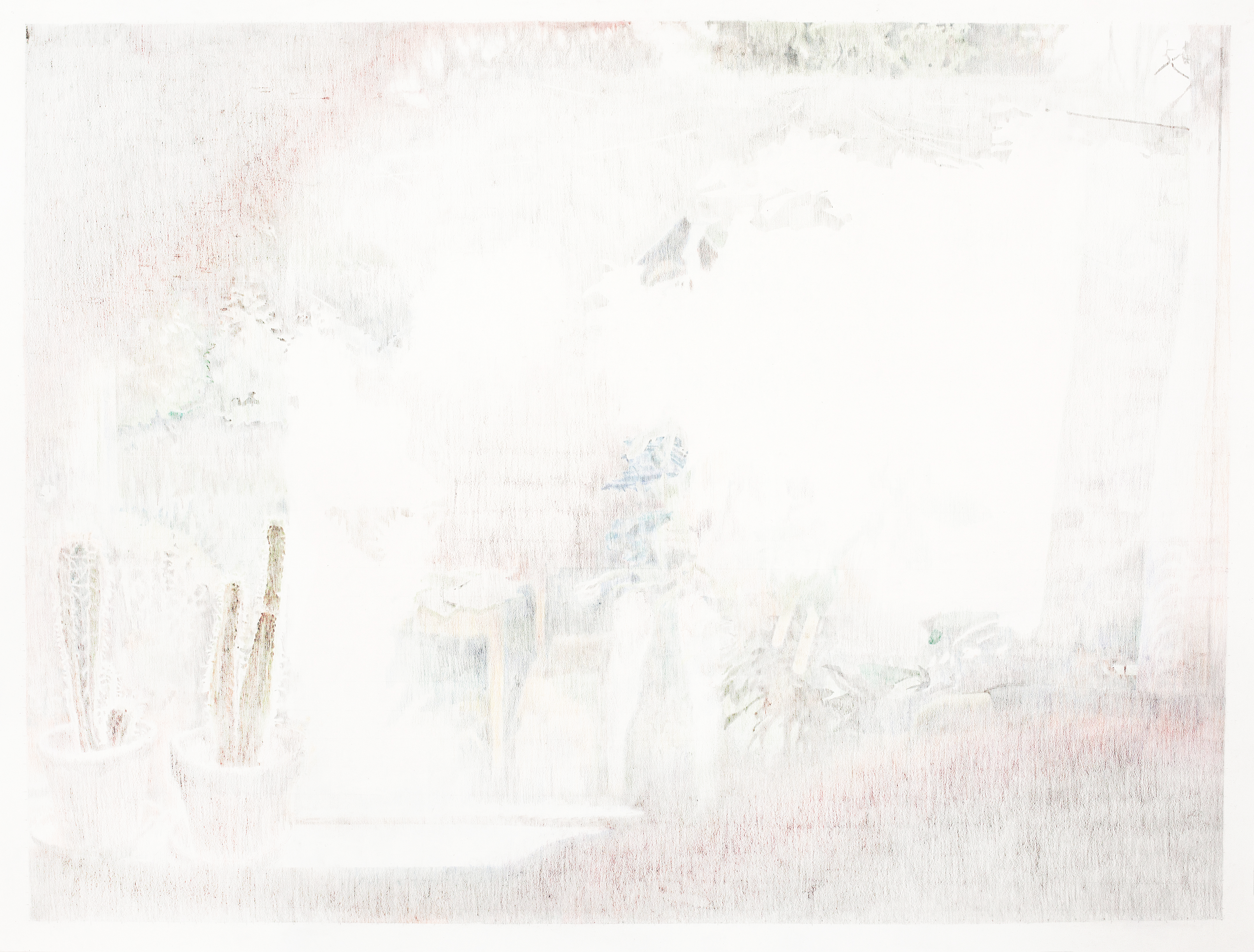 “You know, there’s always a big story somewhere,” Gretchen Frances Bennett says so softly, near-distrait, that the statement almost gets lost in her soft stream of words. Sitting in her studio in Columbia City, her blonde-white curls aureoled by a large, round black-and-white print, the artist delves into the genesis of some of the many drawings, colored cut-outs and folded print-outs lining the walls.

She points to a large black-and-white pencil drawing taking up nearly half a wall. “A drawing of a photo slide of me, a 12 year old standing on the street in Bratislava, Slovakia, during a childhood trip with my parents,” she says. In September, Bennett will go back to Bratislava to retrace the trip. She’ll also visit Prague, where she studied art, as part of a research trip for a collection of personal essays and poems she’s working on.

Bennett, originally from the small town of Camas, Washington, near the Columbia River bordering Oregon, settled in Seattle in the 1980s but pursued studies in Prague and New York City. Her work has been shown in Seattle at Greg Kucera and Vignettes and in New York and Amsterdam.

On Bennett’s knee, a couple of inches below the seam of her bleached petroleum-blue dress, a tattoo spells out Oceanside, Oregon. “A stick ‘n’ poke tattoo,” she explains, softly stroking the large, perpendicular scar next to it. “It’s the beach near the town where my family of Swedish dairy farmers are originally from. It’s where I jumped from a four-foot rock when attempting to spread my father’s ashes, and fell, breaking the tibial plateau in my knee. I ended up not spreading his ashes, but turned my knee to ashes. This month exactly four years ago.”

The tale characterizes Bennett and her work. It’s a story in its smallest, hyper-personal and autobiographical form that, by abstraction and mediation, becomes a larger narrative. One that examines grief and deciphers the mechanisms of memory; of starting over. A story about being both subject and maker of the work and renegotiating her role as an object-maker.

I met with Bennett in her studio to untangle all of this and talk about her solo exhibition The Rough Draft of Everything, on view at Bridge Productions in Georgetown.

What ties the works in the show together?
Most of the drawings, including different cut-out fragment drawings, come from a large drawing called “Fenestra.” The work is based on an iPhone photo I took here, in my living room, of my reflection of the window and the light coming through it. I then transferred it onto paper using a grid that I would slowly pencil in, using stencils—pieces of the original photo—that I printed and cut out. I became so excited by these cut-outs. Although originally meant to be a tool to be discarded, they became the subject. They are flat, but simultaneously sculptural objects. They cast a shadow on the wall and have a feeling of dimension. 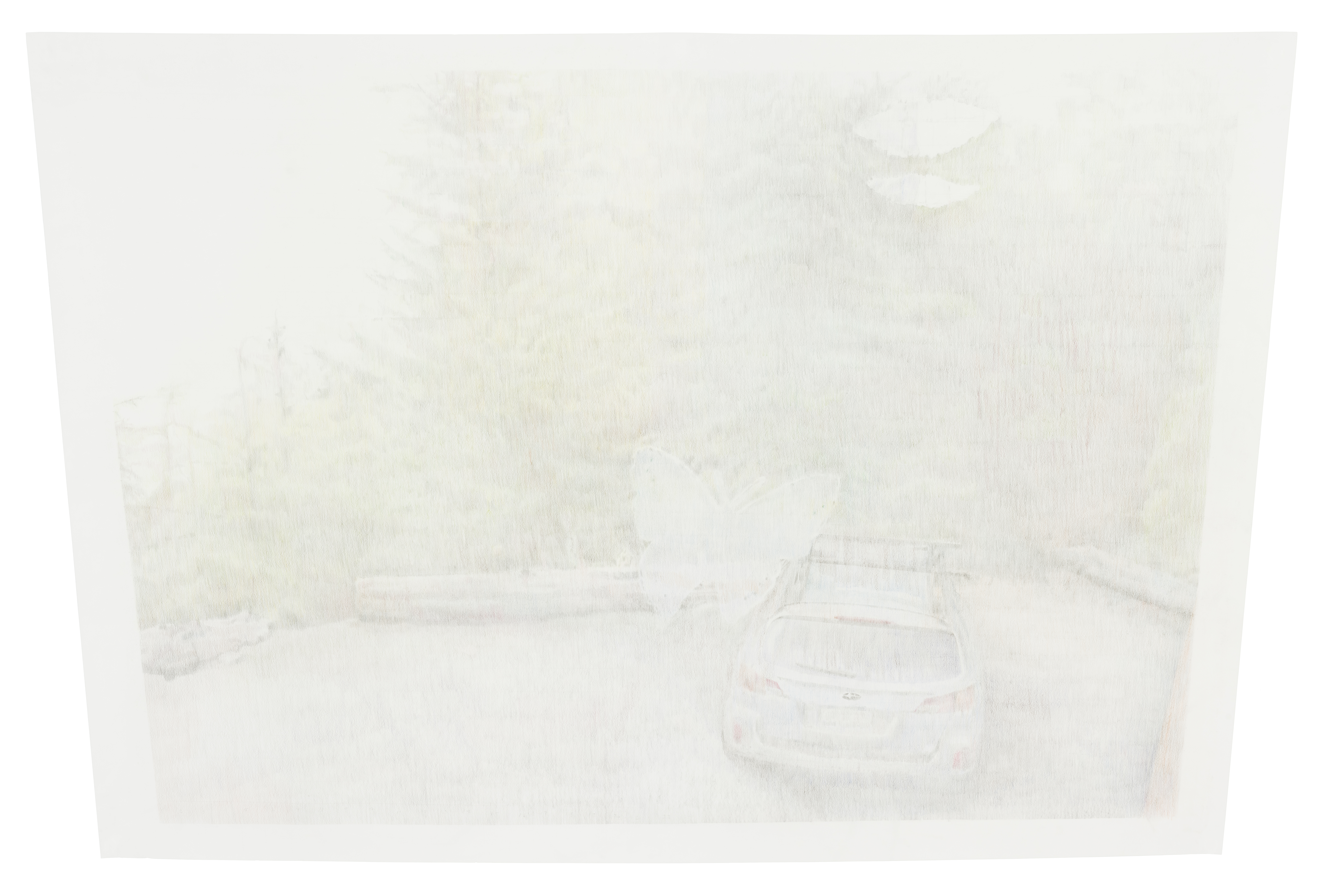 In the original drawing, “Fenestra,” you left the drafting grid visible, which felt really honest. Why did you do that?
I wanted to show my process. This is how I get my bearings when I draw. It’s a very daunting task to draw a window with my reflection in it accurately. If I draw square by square, I can break it down into smaller squares and shapes. Working this way allows me to leave whatever I’m feeling in each square. Maybe before, at some point in time, I wanted to show that I can draw. Now I know I don’t have to.

You said in an interview that you are not interested in an artist persona anymore. Does not having to prove you’re good at drawing have anything to do with that?
Yes. I think too there’s more and more a feeling that I can be of service to the drawings, not the other way around. I’m following the work.

Was that not the case at some earlier point?
That has happened. But I’ve always been able to start over, make the work feel fresh and new.

How do you do that?
By moving, like I did from Brooklyn back to Seattle. It also happened when I broke my knee and had to take a break from making art for a couple of months. The biggest caesura happened two years ago, when my mother died. As my father had passed away before that, the family house had to be cleaned out. I found all these old objects and memories. Watercolors from when I was 13, photos from a family trip to Eastern Europe. I stopped making art because I was grieving, but also because I needed to renegotiate and understand anew what my relationships with objects was. What could I contribute as someone making objects?

What have you learned?
I think the grief has been instructive. Knowing when to stop and reevaluate is important. I didn’t make anything for a long time. I started again last winter. Maybe that’s why the title of the show at Bridge Productions is The Rough Draft of Everything—a draft for putting myself out there again as a maker. Making what resonates with me, and hoping it touches someone. There’s always the feeling that it might not because it’s so private.

Your work seems to tell a small story—it’s literally you, a window, a reflection and nothing more—but at the same time, it presents something bigger. When I was younger, I studied in Prague with Marian Karel, working with high-lead glass that thwarted your vision. There was always another dimension that carried something else. It was then and there that I started really loving the simplicity of the everyday. How the mundane can turn a corner and reveal itself as really strange. I think there’s a tenderness in the everyday, in the things that we overlook. And I think it’s worth it to focus on it.

The Rough Draft of Everything is on view at Bridge Productions until July 29.