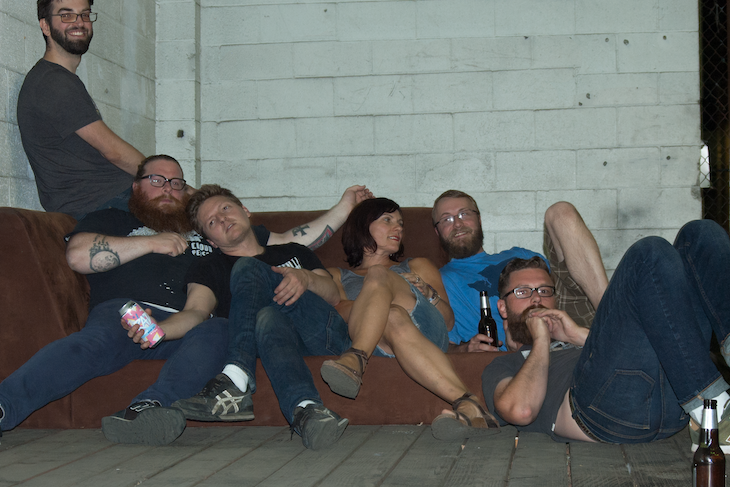 Find out more about Cloud Person via our 10 Questions Quiz below and celebrate the release of “The Cold Starts” with Cloud Person at the Tractor Tavern on Wednesday, Aug. 29

So what’s this song about?
Peter Jordan: Inner demons, self-medication and long-term relationships.

No what’s this song really about?
For real. Long-term relationships seem to spiral slowly from lovers/friends into roommates. Add some depression, alcohol, arguments, moments of candid criticism, formal behavior that ignores deeply rooted problems, apologies, promises to do better and nostalgia for how easy things were in the beginning and you’ve got yourself a Van Holten’s-sized pickle. I’ve been through the fire and, thankfully, came out the other side.

This song is a snapshot of my mind as I was failing my family a while back. I wanted the rhythm and harmony of the song to contrast with the dark subject matter. I’m hoping this is a danceable, upbeat song about some of the lowest moments in my life.

What’s one band name you didn’t choose?
Before Cloud Person I was working on a psych project I wanted to call Robot Gaze. I’ve always wondered if I should’ve gone with that name. Naming bands is a silly endeavor—the dumbest name can be awesome if the music is great.

What bands were you in previously and when did this current one begin?
I was in a string of rock bands that were enjoyable but didn’t do much. Pacific Radio Fire was the most recent and before that Science Fiction Heroes (I think we played one gig). After those dissolved I decided a band was too much work and started playing solo acoustic shows using Cloud Person as my moniker in early 2012. After a bit I had some friends join me on upright bass and violin. That’s when we became a “band.” We were a folk trio. Over the years we added drums, keys and more guitars. At some point I realized that I hated playing folk music and I wanted to have a psych-rock band, so we went through a brief psych phase. Over the last year or so, with the help of the wonderful folks in the band, we’ve moved into our own sound and I’m no longer trying to write any particular kind of music. Just what sounds cool in my head. Every member has different influences and it seeps into the music.

Where do you live?
I live in Carnation, three members live in Seattle, one in Tacoma, and another on Bainbridge Island. We practice in an old industrial building in Sodo.

What was the last thing you bought off the internet?
Slow-flow rubber nipples.

What’s your most unlikely influence?
Herman Brood. Love that guy!

Which emoji do you use the most?
It’s a close tie between these two: ? | ?

Where was your most recent gig and where’s your next?
Our most recent show was at a Lord of the Rings themed bar called Mirkwood Public House in Arlington. It was a weird night but the folks there are lovely and we had a great time.

Our next show is at the Tractor this Wednesday, August 29. Our boos in Moon Dial are releasing an EP and we’re releasing this single. The super-talented Carina Lewis is also playing.