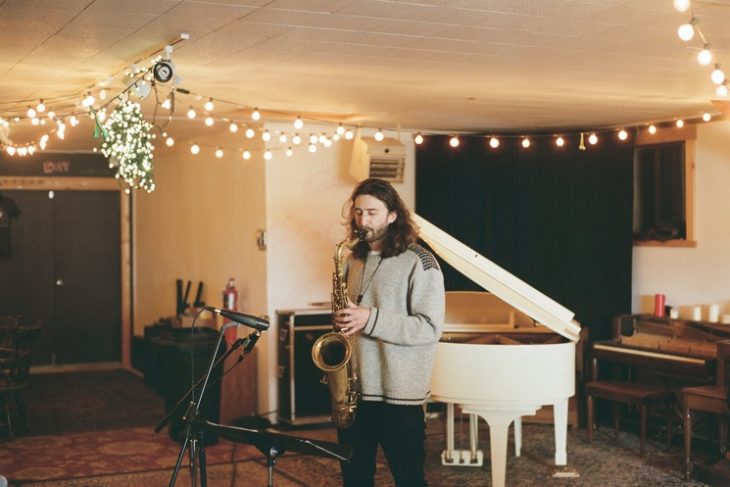 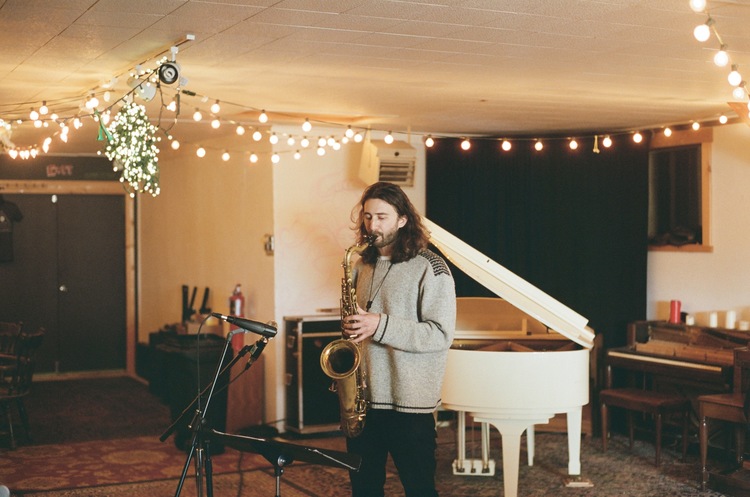 As a cool May evening descends over the patio of Peddler Brewing Company in Ballard, Levi Gillis and his band cut above the clank of forks and knives. Listeners eat their fill of latke sandwiches from a nearby food truck while Gillis swings his tenor saxophone and bows his head, as if adjusting his antennae for better reception. From the static of sound, Gillis and his band Hunter Gather summon soulful, ear-worming melodies, made richer and more dynamic as each individual player shares with the rest of the group.

Gillis, 25, was born in Mill Valley, Calif., and was drawn to music from a very young age. He recalls one particular memory his mom likes to tell him: “I was a young toddler going into a church somewhere, and there was an organ playing. Apparently, I was just rapt, totally enthralled.”

As he grew, Gillis was pulled toward improvisational music. He began playing jazz after meeting other musicians in high school who were also into experimental music. Eventually, his love of jazz took him to University of Washington’s music program, where he studied with avant-gardeists Cuong Vu and Greg Sinibaldi.

“I just love the sound of jazz—the personality and the spontaneity of it,” Gillis says. “There’s a certain amount of trust you have to have with other people in playing improvisational music. It’s a very interpersonal thing. It’s a concentrated way of being with someone else.” This awareness is what makes Gillis’ music special. From the moment he steps forward from the group, closes his eyes and lets the first melancholy tone escape his horn, Gillis connects with that curious toddler he once was, staring at at that church pipe organ.

Alongside Gillis in Hunter Gather are some of his favorite musicians: guitarists Ronan Delisle and Ryan Beckley and drummer Evan Woodle. Delisle and Beckley gracefully negotiate giving each other space—one taking the low end, the other soloing or playing interlocking parts with Gillis. Woodle douses it all with atmosphere and pulse. The instrumentation is unorthodox, notably without bass and with two times the guitar, which was intentional on Gillis’ part.

“I’ve realized my love of the guitar as an instrument,” Gillis says. “All of the different things guitar players can do always gets me. I sometimes find myself wanting to sound like one. But I end up feeling more like the singer in Hunter Gather because there are already two guitar players.”

The interdependence between storytelling vocal and strummed, stringed accompaniment is the fulcrum on which everything in American roots music balances. That balance pervades Gillis’ Hunter Gather EP, self-released last April. “I Want to Be an American” has the sort of momentum and earnest delivery of a Doc Watson tune, while the “Coal Creek” reimagines the Roscoe Holcomb traditional song by the same name.

Gillis been a fan of folk-blues since college, when he turned onto Delta Bluesman like Skip James, Robert Johnson and Mississippi John Hurt. “Their music is all incredibly personal and they seem to operate on completely their own terms,” he says. Like them, Gillis also forges his own way. Since graduating UW, he’s played in many groups, including the Dip, a throwback soul band fronted by Beat Connection’s Tom Eddy. He spends his days working as the production manager at Earshot Jazz, the team behind the festival and monthly magazine that stoke the fires of Seattle’s jazz scene.

In August, Gillis and his band plan to release a full-length on Seattle label Table and Chairs, known as the home of burgeoning jazz talents like Bad Luck, Andy Clausen and Ray Larson. By that time, they’ll have added keyboardist Cameron Sharif to the group. Expect an even broader cosmos of guitar-tenor interplay and rhythmic intensity.