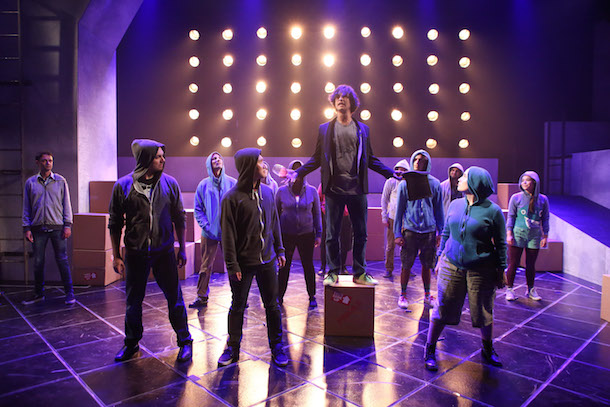 Arjun Pande as Topiary and the cast of 'Teh Internet.' Photo by Jeff Carpenter

Teh Internet is Serious Business, Washington Ensemble Theatre’s new offering directed by Wayne Rawley, is not a show that gets mired in sentiment, or bogs your brain down in anything resembling character development. The play teeters between being a unique, smarter-than-a-whip’s-crack production with its finger on the pulse of the now and being a two-dimensional adolescent romp through a weird and sometimes confusing digital Wonderland. It’s a psychedelic digital dream, jaded yet idealistic, where genius, technology, revolution and global intrigue collide. With dance numbers! It makes you think and wonder, and then think a little more. It definitely gives you an education (entire swaths of dialogue are written and delivered in HTML, no joke). And I loved it.

Tim Price’s play begins innocently enough—So feckless! So twee!—but that’s just what it wants you to believe. There is a chaotic blast of color and sound and some seriously annoying dubstep (is there any other kind?), and then we are introduced to whole mess of Internet-famous characters that you probably already know and love (or at least already know): MEMES! Brought to life and dancing around like lunatics. There’s good old Grumpy Cat, for instance, and Socially Awkward Penguin, Advice Dog, Sad Stormtrooper and even Condescending Willy Wonka, in all his shade-throwing glory.

It slowly becomes clear that we are deep inside the Internet itself—or a very cleverly stylized representation of it. (Kudos to scenic and lighting designer Tristan Roberson for creating such a simple and clever digital reality.) Nothing takes place exclusively in the alleged “real world” in this show, the action occurs in the shared alternate space of the web, where things like memes live. And websites. And hackers.

In Teh Internet, Price crafts a fascinating account of the birth and eventual rise to power of the famous Anonymous and LulzSec, the shadowy and powerful online communities of mostly teenage hackers who emerged, almost by accident, in the late 2000s, to rise like a social justice vanguard. Although living all over the world and having never actually met anywhere other than clandestine chatrooms, these brilliant, immature and unlikely characters worked together to crash the websites of organizations they deemed dangerous to the public at large, such as the ever-scary and Tom-Cruisey Church of Scientology, the right-wing propaganda network Fox, Westboro Baptist Church, the CIA and even the entire government of Tunisia. The group acted autonomously as judge, jury and executioner to shut these websites down through coordinated digital attacks in an atmosphere of anonymity and impunity until infiltration led to the arrest of the group’s most prolific hackers.

The frenetic opening sequence might lead you to believe that Teh Internet is merely a jaunty, if somewhat predictable, meta-commentary on the nature of the Internet, and it is. That’s cute and all, but it’s far from the point. Soon the more innocent memes are joined by dubious characters like “Pedo Bear” and the odious alt-right mascot “Pepe the Frog”—digital wolves in sheep’s clothing that seem innocent enough at first, but bring dangerous messages and hateful ideology with their lulz. And as the actual human characters are introduced (known only by their screen names, of course: Pwnsauce, Topiary, NarcoTrollo, etc.), a deeper, darker narrative takes shape.

Teh Internet is Serious Business is uniquely conceived and staged, curiously impactful, and raises many questions but answers few. It seems all fine and dandy when a vigilante group like Anonymous goes after obvious cartoon villains and criminals (read: Fox News), but that power is the proverbial double-edged sword. With no checks and balances, cloaked in secrecy and a lack of apparent consequences, what would stop similar groups from using the same tools against the good guys—or against anyone, really? What’s the final outcome when “just a bunch of geeks in basements” gains that kind of power? It’s too early to say. But this thoughtful, interesting show, formidably played with energy and insight, effectively underscores the real way the Internet’s virtual reality facilitates a diverse and creative global community—for better and for worse.

The Internet is Serious Business runs through Oct. 2 at 12th Avenue Arts.