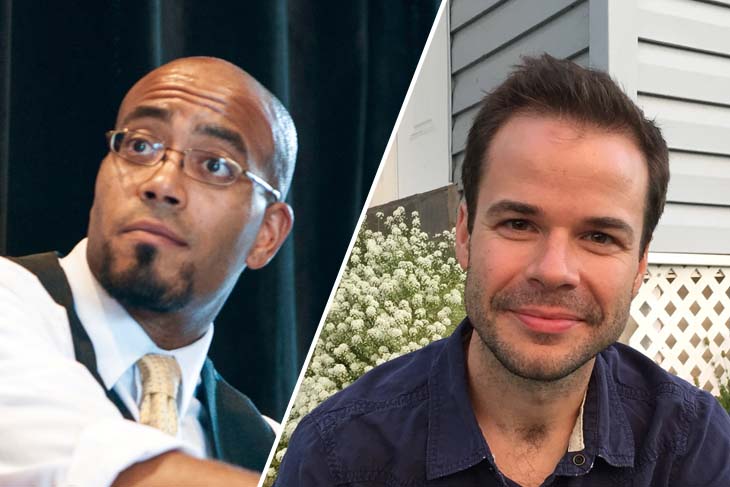 Rural Georgia is an often silent but ever-present character in Welcome to Braggsville, T. Geronimo Johnson’s novel about four Berkeley students protesting a Civil War reenactment in tiny, fictional Braggsville. Any responsible stage adaptation by Northerners required that we at least make its acquaintance. So a plan was hatched: Daemond and I would go write on location. We’d visit the historic sites, get off the main roads, talk to strangers and eat a ton of food made primarily of batter. I wasn’t sure what we’d find but I was hyper-aware that I was basically following the book’s plot: plucky White liberal fascinated by the racist South invites Black friend to come on down and investigate!

Racist paraphernalia—bumper stickers, confederate flags, minstralized lawn jockeys—feature prominently in the book’s cultural landscape, yet in 900-plus miles exploring towns and countryside there was nary a sighting of such things. Wait, was I actually disappointed I didn’t see more overt signs of racism? Like the kids in the book, some part of me wanted to confirm my biases about the backward South and progressive North. Instead, I got a belated lesson in applied American history.

We visited the Ebenezer Baptist Church in Atlanta with Mrs. Haynes, Daemond’s sister’s mother-in-law. Sitting in the wooden pews, I listened to a 1968 recording of Dr. King while staring at his empty pulpit. I was overcome with humility, admiration, grief, patriotism thinking about Dr. King’s parishioners: everyday people of great courage who took on an oppressive, brutal government with nonviolent resistance, risking their lives for their rights. Why aren’t more school groups making pilgrimages here instead of Washington, D.C.? How did I not know Atlanta was at the heart of the Civil Rights movement? Mrs. Haynes and Daemond talked about key players in the movement on a first name basis—listening to them, I felt so ignorant and embarrassed.

Mrs. Haynes described summers in junior high when she and her friends walked the picket lines in front of Woolworths while her parents worked. She spoke casually about adults shielding her from police dogs, about being removed from the line when fire hoses were brought out. Mrs. Haynes is the same age as my parents; while my mom and her family were taking road trips between Wisconsin and New York, stopping to eat at any roadside diner they pleased, Mrs. Haynes was fighting for her right to be served at her local lunch counter.

The legacy of racial segregation isn’t confined to the South or distant past, but exists in the living memories of the generation now retiring—the generation who raised those of us now beginning to run things. Racism isn’t a collection of artifacts but a hereditary disease that affects our entire country, and the real danger is that a lot of Northerners like to think it’s not in our gene pool. —JOSH AASENG

Our adventures begin at Waffle House, and yo—the Southern hospitality has my head spinning with the yes sirs and yes ma’ams buzzing like flies. Throughout Georgia, hospitality is as rampant as sweet tea offered with every meal. Kindness extends beyond politeness and it feels genuine. Coming from the lily white Pacific Northwest (where Blacks are less than 5 percent of the population) to Atlanta (aka Chocolate City), I’m reminded of how I often feel back in NYC—welcome.

Intersections are everywhere. Black and white, white and brown, brown and…but no one’s noticing. This “non-issue” issue has me smiling and wanting to call an impromptu Town Hall in the street: “Are y’all catching this? Do you know how lovely this is?!”

Still there is an air of…historic tension, a subtle insistence to be past this race “stuff.” It’s not quite insecurity but it’s got a flavor not unlike White fragility—“Why does everything have to come back to race?” Because in separate conversations, two White Atlantans say the city’s support of the Civil Rights Movement was more business-driven than humanistic, that civic leaders had hopes for Atlanta as Georgia’s new capitol and integration seemed to be the direction of the nation. Because these big-ass plantation mansions that peeps drool over were built on the backs of slaves. Because millions of Blacks and POCs are still waiting for this country to acknowledge the terrorism that was slavery. But that was a long time ago (actually only two or three generations back, but who’s counting) and we’ve come so far.

At the Civil Rights Museum, history becomes tangible. Hearing about Ruby Bridges, the little Black girl escorted to school by the National Guard during desegregation, who never cried but attended school alone after every White student in her class transferred. Hearing Mrs. Haynes, who marched as a teenager, describe how they dressed (not in Sunday best, but presentable to remove any trivial reasons to be denied their humanity). Sitting at a mock lunch counter to hear threats and epithets hurled at me to make real what the protesters whose lives were actually threatened experienced. Hearing Mrs. Haynes remind us there has never been any advancement in this country without struggle.

And I’m consumed by anger, at what they had to endure. And I’m wondering, because I honestly don’t know in today’s socio-political climate, how far have we come?
Just like the main characters in Braggsville, I thought I’d see more Confederate flags and hear more Southern drawls. Instead, I hear the tour guide at Stone Mountain— the memorial to prominent “heroes” from the Confederacy, carved into a mountain of solid granite as large as Mount Rushmore— say while looking directly at me, “It’s not about racism.”

I guess some things aren’t as simple as black and white. —DAEMOND ARRINDELL