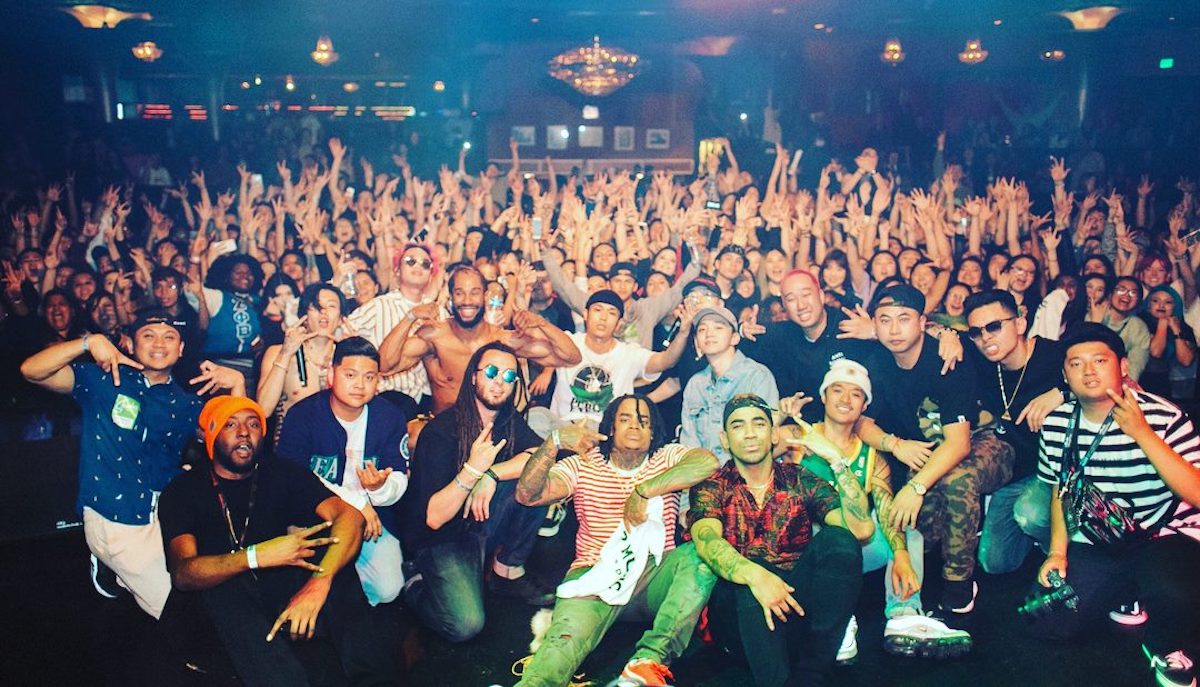 The H1GHR Music crew at the Showbox in May. Photo by Jordan Nicholson.

Jarv Dee laughs as he remembers the first direct message he got from Korean pop star Jay Park. Despite Park’s 2.4 million followers, Dee had no idea who he was. A couple years later he certainly does. Thanks to Park’s influence, the veteran Seattle rapper is now on the edge of a multinational breakthrough.

Dee, along with fellow Seattle rappers Avatar Darko, Raz Simone and singer Phe Reds, have all recently signed with H1GHR Music, a label co-founded by Park and singer-producer Cha Cha Malone. Park and Malone grew up in Edmonds and Seattle, respectively, and met in the early 2000s as members of Seattle breakdance crew Art of Movement. Back then the scene was obsessed with rap battles and ciphers, and in this world of windmills and headspins the two cut their teeth as performers. Park eventually moved to Seoul and was sucked into the Korean talent-agency machine, landing at the helm of boy band 2PM. The group’s massive popularity lead to Park’s appearance on magazine covers, TV variety shows, Twitter’s top trending topics and the like. Using his accumulated social capital, he launched his first record label, the Seoul-based AOMG, in 2013.

All along, Park and Malone remained friends and musical collaborators, and last year, citing contractual limitations they encountered trying to consolidate their international cast on AOMG, the pair founded H1GHR Music. What began as a legal separation of interests soon took on its own personality as a bridge between Korea and the U.S., Seattle in particular. And if H1GHR is basically a global extension of AOMG, which already wields the kind of clout that sells out shows in Asia in a matter of seconds, then the launch pad may be set for the Seattle-Seoul sibling label as well.

As an R&B singer, Phe Reds’ crossover to Korean K-Pop fans is logical, so it’s the three rappers from Seattle’s infamously isolated hip-hop scene who make for the most interesting speculation. Simone’s Closer, which features a Park collaboration on its final song, has already gained traction on international sites, but the most telling perspective of H1GHR artists’ crossover appeal might be an offhanded quip from Darko in a recent conversation. When asked about the language barrier between him and his multi-lingual Korean labelmates, he said the point is moot: “I don’t know what the hell they be sayin,’ bro, but it sounds so dope.” Modern rap pushes style over lyrics; melody and cadence are universally appreciated. In turn, that stylistic appreciation and the novelty of non-Asian-American artists could very well be a point of intrigue for Asian fans.

“H1GHR Music is the only hip-hop label probably in Asia that has signed non-Asian artists from the U.S.,” Park says via email. The rapping Seattleites bring a tougher sound than much of the rest of the label, and Park says that’s exactly what appeals to him: “It’s real, it’s raw and there’s no sugarcoating anything, which is exactly why I appreciate them as artists.”

H1GHR’s potential as an Asian-American tastemaker is visible across the U.S. Asian rap has jumped from a sort of American-rap pantomime to legitimate crossover force. New York-based media firm 88rising recently notched the first Chinese artist to reach number one on the iTunes hip-hop singles chart (Kris Wu’s “Deserve,” which features Travis Scott) and the first Asian artist to have a number one album on the iTunes rap charts (Indonesian rapper Rich Brian’s Amen). 88rising, which the New Yorker recently called “hip-hop’s new frontier,” is readying a U.S. arena tour that hits Kent’s ShoWare Center on October 27.

Park’s role as Korean American cultural liaison is growing fast. Last year he became the first Asian American signed to Jay-Z’s Roc Nation label, and last month he released a song called “Soju,” a club anthem effectively introducing the Korean booze of the same name to American audiences. To make the song easier to swallow, the video begins with a dictionary definition of the beverage and features a guest verse from 2 Chainz.

By signing veteran Seattle MCs, H1GHR is banking on the reciprocated success of the Asian rap phenomenon. The fact that the three hadn’t necessarily punched their golden ticket in the states made them somewhat free to jump overseas. “I’ve always been scared of fast recognition because you never know what’s gonna happen after that,” Dee says. “I’ve been putting in work for a while though, and it feels like I accomplished something, but this is like the second life of me.” Dee’s Safe Travels EP is due in July with Darko’s Truly Unruly to follow in August. Both will be released on both sides of the Pacific.

Darko’s Estonian-Russian heritage and multi-lingual flow made him a natural choice to hit the global scene (“I always had the international swag,” he says). He flew to Korea with Dee, Simone and Red in June for H1GHR Music’s one-year anniversary concert and was taken aback by the attention from local fans, who swarmed him for photos immediately after the show. “They show more love than I get in Seattle,” he says.

Dee, too, realized the powerful an ally he’d made in Park during his trip to Seoul. Walking around the city, he noticed Park’s face in Subway ads plastered everywhere. At a major mall, it was Nike ads. He saw other AOMG artists, like the label’s lead producer Gray, on similar billboard treatments all over the place. These young artists had transcended rock-star status and become celebrities, spokespeople.