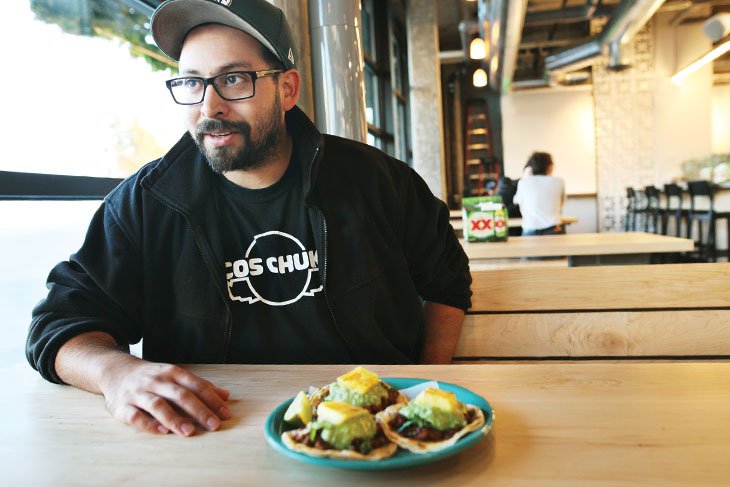 “To me it’s a Seattle restaurant,” says Tacos Chukis owner Roberto Salmerón, seated at his fourth Chukis location. “It wouldn’t be the same had it evolved somewhere else.” Photos by Kelly O

Back in 2011, recent University of Washington grad Roberto Salmerón opened Tacos Chukis in an out-of-the-way nook on Broadway on Capitol Hill. This was before tacos were a trendy lifestyle hashtag, when Chukis represented a bold new wave of ethnic cuisine infiltrating Seattle’s densest neighborhood. More than symbolic, the tacos were delicious, and seekers flocked.

At the same time, about a mile away in the Central District, a small community garden adorned an otherwise sprawling vacant lot on the southwestern corner of 23rd Avenue and E Union Street.

On that corner now sits the Central, a 92-unit mixed-use apartment building. In October of this year, Salmerón opened a new Tacos Chukis location there—his fourth. Chukis is the first tenant in the building’s coveted corner retail space, which sat vacant since the Central opened in early 2016. Tacos Chukis is an optimistic contribution to this chapter of the neighborhood’s ongoing saga of gentrification. As both meal and metaphor, Chukis’ tacos lend some semblance of balance to one of the most culturally fraught blocks in all of Seattle. 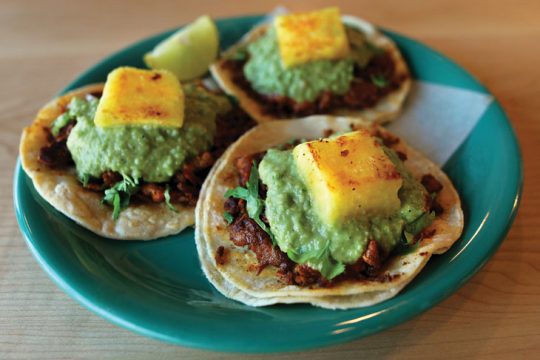 Across Union, the massive new East Union building recently replaced a gas station, p-patch and boxing gym with 144 apartments and a fancy chain supermarket. Across 23rd, the Midtown Center, long home to several black-owned businesses, will become a seven-story, 429-unit, mixed-use apartment complex in a few years. Amid the development—as well as protracted street construction—businesses owned by people of color, particularly black people, have been barely holding on.

“I’m proud to be a minority owning four restaurants in Seattle, doing well, kicking ass with something I love, something I grew up with,” says Salmerón, the son of migrant workers who spent summers in Eastern Washington and winters in Tijuana. “It had to take somebody like me, who grew up the way I did to be able to do it right. That’s how things evolve organically, too, with culture and in the city, and people contributing and adding to it and making it better. That’s what culture is to me.”

Walled by floor-to-ceiling windows and a garage-style roll-up door, plus outdoor seating still to come, the new Chukis is Salmerón’s largest venture yet. (It had to be—he needed a commissary kitchen to prep ingredients for his smaller shops in South Lake Union and Beacon Hill, both opened in the last three years.) It’s also a highly visible, fully functioning example of a minority-owned business excelling on its own, very accessible terms. Tacos cost $2.20—a preposterous bargain in 2018 and a mere 60-cent increase since the first Chukis opened. Otherwise the Tacos Chukis menu hasn’t changed at all in seven years.

Those tacos remain some of the best in Seattle. Salmerón demurs on their greatness—”I don’t know, man. My thing is just keeping it simple.”—but I’ll tell you right now: the tangy green jalapeno-guacamole salsa and sweet-charred grilled pineapple are a fresh, unexpected flavor explosion.

Nothing’s perfect in this world, but for a lot of reasons, Tacos Chukis comes close.