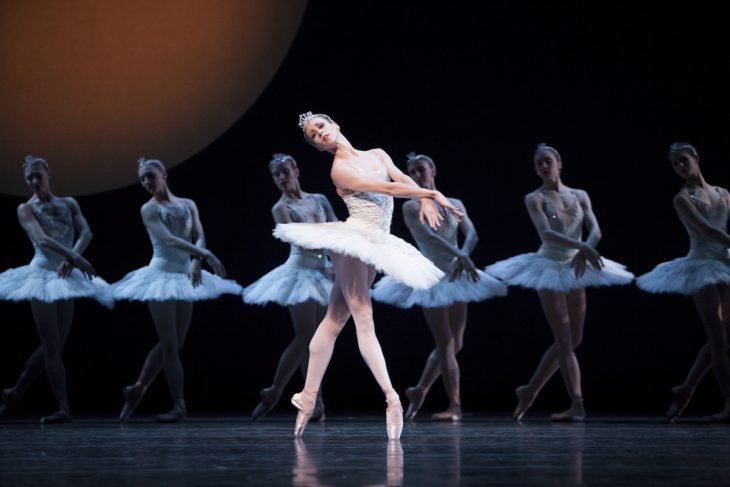 Last Friday Pacific Northwest Ballet opened its 2018 presentation of Swan Lake with a performance so inspired that it felt to this sometimes-jaded dance critic like watching a brand-new production. Performances by principal dancer Lesley Rausch in the role of Odette/Odile and soloist Kyle Davis as the Jester were technically flawless and fiercely emotional. The stark contrast between minimalist sets from revered artist Ming Cho Lee and sparkly costumes designed by Paul Tazewell is a work of art in itself, and the PNB Orchestra led by Emil de Cou seemed as passionate about Tchaikovsky’s iconic score as Prince Siegfried for his doomed Odette.

In its fifth showing since the 2003 premiere, PNB co-founder Kent Stowell’s Swan Lake is remounted every few seasons and is a reliable source of ticket sales for the company in an age where funding for the arts is increasingly hard to procure. It’s a classical ballet staple with a world-famous score and a beloved storyline, of ill-fated love between a prince and a princess turned into a swan by an evil sorcerer. For many dance fans, it represents the epitome of ballet performance. The role of Odette/Odile is performed by a single dancer, who must be able to switch between the delicate vulnerability of the cursed Odette in Acts II and IV, and the commanding badness of Odile in Act III.

Lesley Rausch’s opening night performance of Odette/Odile balanced those two personas perfectly. Her traumatized Odette glided across the stage in impossibly small bourrees, hands folded in quiet despair as she navigated around her 24 swan sisters. Rausch’s Odile was certifiably evil, bounding onto the stage with stunning arabesques and a victorious grin. Rausch’s best dancing is in more commanding roles—her most memorable to date in Balanchine’s Prodigal Son—but in Stowell’s Swan Lake Rausch shows that she can be as powerful a ballerina in softer, more coy roles as she is when seducing unsuspecting young princes from their betrothed.

That balance between good and evil, reality and enchantment are reflected through the whole of Stowell’s Swan Lake. The brilliantly lit moon in Ming Cho Lee’s “lake” scene is as comforting to look at as a real full moon in the middle of the woods, yet the trees in the scene are subtly angled so that everything, even the stage, appears to look a bit off-kilter. PNB historian Doug Fullington explained in a pre-show lecture that Ming Cho Lee designed every scene to be a little askew to represent the confusion that Prince Siegfried feels when seduced by Odile into thinking that she is his true love, the doomed swan Odette.

Contrasting the mellow greys and yellows of Swan Lake’s sets are Paul Tazewell’s eye-popping costumes. Prince Siegfried’s royal court is dressed in deep jewel tones and heavy, velvety fabrics. According to Fullington, Tazewell (who also created the costumes for the hit Broadway musical Hamilton) designed the costumes to make the characters stand out against the monochromatic scenery. Odile’s black swan tutu explodes in diamond sparkles that emphasize the brazen showiness of her character, and intricate silver beading in Odette’s soft white tutu and headdress glimmers in the delicate lighting by PNB’s expert lighting designer Randall Chiarelli.

Amid all the visual artistry of PNB’s Swan Lake, it is the dancers’ execution of Stowell’s choreography that makes this production memorable. It’s a common ballet; if the dancers are bored with it, there is no magic. But in this year’s production, every dancer so perfectly performs with the appropriate commanding or ethereal qualities that every role—even Odette’s 24 swan sisters—is inspired and inspiring to watch.

Swan Lake is the ultimate story of the duality of human nature, and it takes a huge amount of rare artistic talent to communicate that effectively amidst the pomp and circumstance of a large classical ballet production. Yet, at least on opening night, PNB nailed it.

This article has been updated. An earlier version of this story incorrectly identified the dancer Kyle Davis as Stephen Loch. We regret the error.