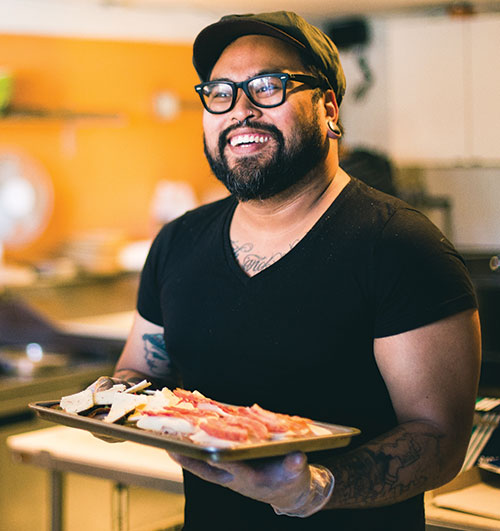 From a small nook at the hilltop junction of Beacon Ave. and 15th Ave. S, Beacon Ave Sandwiches serves up the flavor profile of its surroundings, in delectable forms.

The house special, El Centro, is a fusion of a Mexican torta and a Vietnamese banh mi, a chicken-and-avocado number named after the Latino community center a block away. The Jefferson Park, named after the playfield a mile down the road, combines mozzarella, tomato, basil and pesto in homage to the original Italian settlers of “Garlic Gulch,” as part of Beacon Hill used to be known. A new special called Thizz! expands the banh mi repertoire with a Thai twist of chilies and Sriracha on chicken and provolone. At around $8, sandwiches are loaded with an improbable amount of meat and veggies, big enough for lunch and dinner.

As a procession of Seattle’s favorite locally owned cafes are pried out of their homes by corporate storefronts (try counting all the bank locations on Broadway) Beacon Ave Sandwiches has become even more local and independent. On Dec. 1, ownership changed hands from Luis and Leona Rodriguez, proprietors of nearby hip-hop coffee hub The Station, to Paolo Escobar and Manuel Rodriguez-Castro, who started as employees of Beacon Sandwiches. The Rodriguezes have their hands full with the busy café and two young sons and were pleased to hand the deli off to family.

The success of a specialty sandwich shop is fragile (RIP Paseo) and if Beacon Ave Sandwiches lasts, it’ll be dependent on support from the neighborhood as well as from the broader multicultural “fam.” For example, hip-hop artist Geo is bringing his pop-up event Food and Sh*t to the deli sometime this month, creating a special that’ll go on the menu and beckoning a broader audience via social media and word of mouth.

Changes are in store for Beacon Hill, but Escobar and Rodriguez-Castro inherited five years on the lease, buying them time to build a bigger clientele. They plan to offer local deliveries, breakfast sandwiches and drip coffee from the Station. They’re always experimenting with delicious new sandwich-fusion prototypes that they bust out by request; definitely do that. The other day Escobar whipped up a spicy/savory multi-pork construction with peppers and carrot slivers for me—Cuba by way of Vietnam.

Escobar, raised in the Philippines and Chicago and trained in French culinary arts and Filipino home cooking, says his Baha’i faith frames his business ethos.

“In Baha’i principles, work is one of the highest forms of praise,” he says. “Coming from the streets of Chicago, I’ve got a temper and a huge head, so Baha’i gives me a thing to reflect on while I’m working, to stay levelheaded and show love to the people who come here. We’re on a mission to make them happy, their stomachs full and to build community around us.”