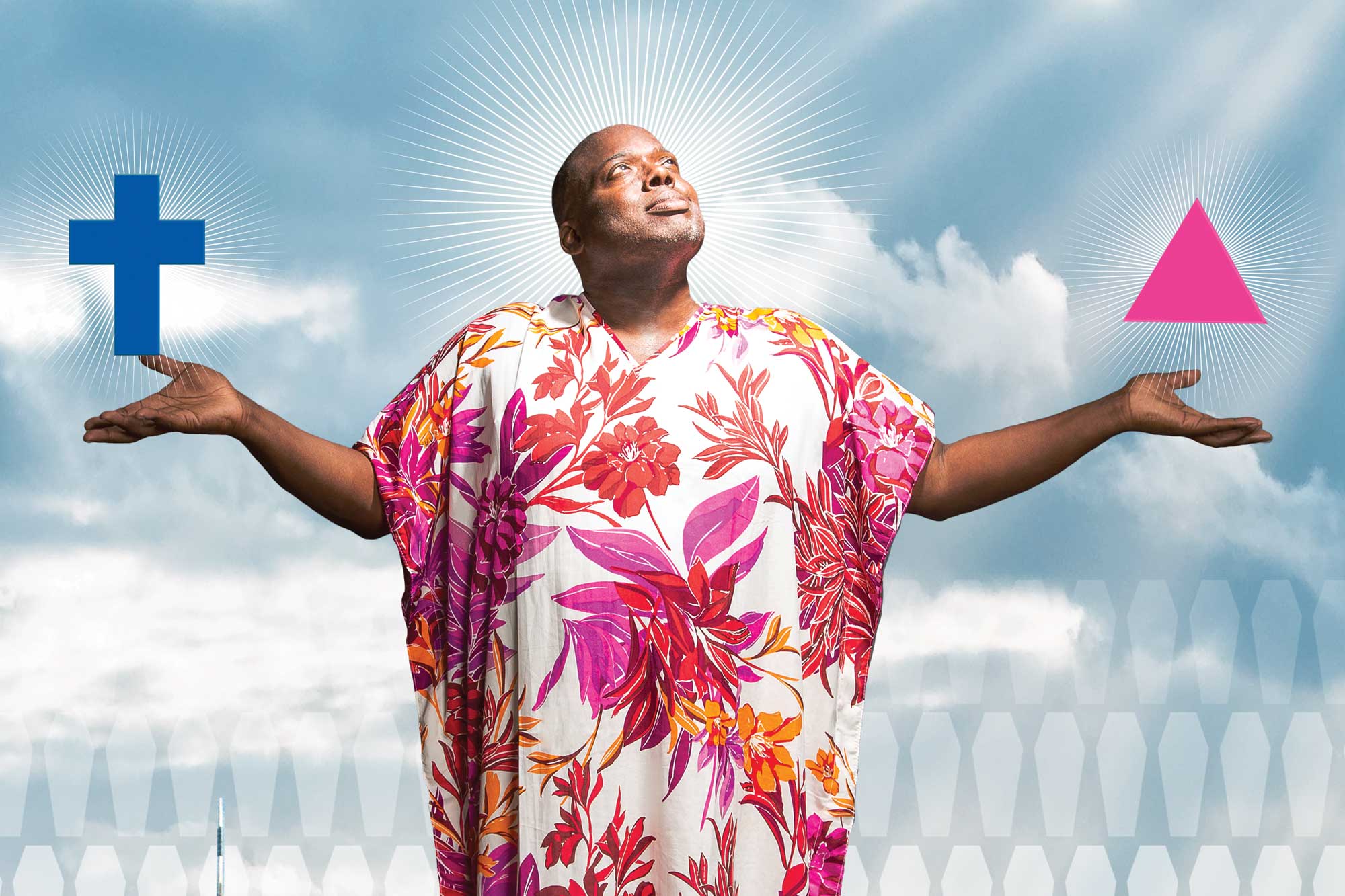 On a September night in 1997, Chad Goller-Sojourner stood on the George Washington Bridge preparing to jump because he could no longer hear the voice of God. As a young gay Black man fighting through the height of the AIDS crisis in New York City, he’d received that voice as he ministered to the dying, as he and fellow survivors dumped the ashes of dead men onto the White House lawn and marched an open casket through Manhattan to the Republican headquarters on West 43rd. In one month he attended 16 funerals.

Goller-Sojourner describes the voice of God variously as a centering peace, a reassuring whisper or snippets from sermons and scripture booming in his ears: “I have given you authority to trample on snakes and scorpions.” But now, as a new round of antiretroviral drug cocktails began to stem the death toll and the furious urgency of his activism started to wane, that voice was gone.

“I just wanted to crash to earth and fly home to God,” says Goller-Sojourner, who reflects on this time in the spiritual wilderness in his new solo show, Marching in Gucci: Memoirs of a Well-Dressed AIDS Activist, coming to Langston Hughes Performing Arts Institute this month. The show is his effort to bear witness to the victims and villains of that harrowing era and to confront the grief and trauma that remain. It’s also a reckoning of his own complicated story, the third installment of a triptych that he says will be his last autobiographical solo show. “I’m telling it all, putting all the business on the street,” he says. “All the dirty.”

Goller-Sojourner’s minimalist shows—he calls them “stories”—require only a podium and some accompanying slides and video from historical sources and his personal archives. He tours his stories at colleges and theatres around the country, traveling light. His performances are intimate and confessional; he dishes and declaims directly to the audience with footnotes and funny asides. As inspiration, he cites Essex Hemphill and Marlon Riggs, two gay, Black activist-artists who died of AIDS in the mid-’90s, along with the feminist writer Audre Lorde.

Goller-Sojourner also writes essays, plays and poetry and mentors youth in writing, but solo storytelling best suits his persona. “There is something about the actual speaking of words that adds depth and purpose,” he says. “Creating and performing solo work transports me to a place where everything about me fits and matters, a place where I feel like everybody is pulling for me, a place where I feel distinctively beautiful.”

Goller-Sojourner, 47, is a tall, thickset man with a sprinkling of gray in his beard, who gestures delicately as he speaks. His voice can range from the cutting inflections of a catty club queen to the plaintive tremolo of an evangelist. He was raised Methodist in the Tacoma suburbs by white adoptive parents, and he didn’t have a Black friend until he went to college. He knew he was Black before he knew he was gay—“People will always remind you that you’re Black,” he says—and his mannerisms gave him away before he even fully knew what “gay” meant. When he came out as a teen, in an attempt to change the subject after missing curfew (he’d been out carousing with older men), his mother told him she’d known since he was three.

When Goller-Sojourner left home to attend Western Washington University in Bellingham, he “aged out” of the de facto white privilege of his household and was forced to confront his Black identity in a world he was unprepared to navigate. He detailed this experience in his second solo show, Riding in Cars with Black People & Other Newly Dangerous Acts: A Memoir in Vanishing Whiteness, which debuted in 2013. Goller-Sojourner’s ensemble of identities—Black but raised white, unabashedly gay, Christian—give him a unique insight into how privilege works. “I know white people better than white people know white people,” he says.

At Western his expanding Black consciousness drew him to activism. He organized on campus against South African apartheid and with People of Color Against AIDS Network (POCAAN). He added the surname Sojourner to his own in honor of the abolitionist and women’s rights activist Sojourner Truth. Organizing in a mostly white place like Western helped him hone his sense of storytelling and showmanship—“convincing white people to do what they should’ve done a long time ago,” is how he describes it. “Stories have always been my currency,” he says. “They got me into spaces with the ‘beautiful people.’ It’s what I brought to the party.”

In pursuit of those beautiful people and their parties, Goller-Sojourner transferred to Hunter College in 1992 as the AIDS crisis decimated New York City’s gay population. He started organizing and protesting with ACT UP, a network of activists drawing attention to the epidemic with increasingly confrontational direct actions. Within two months of arriving in New York, he was part of ACT UP’s Ashes Action. He can be seen in photos and videos from that day pressed between a squad of police on horseback and the gates of the White House as protesters dumped the ashes of loved ones onto the lawn. Clouds of human cremains billow like bomb-blasts in the air behind him.

This was his life. Besides college and work, the gay club scene and activism, he spent what was left of his free time visiting and praying with the dying, often taking the place of their estranged religious families.

“I’d call someone’s parents and say, ‘They’re not long for this world, you need to come to New York,’ and they’d say, ‘Don’t call here again,’” Goller-Sojourner says, noting with outrage that those family members were more than happy to visit after their relative was dead. “They don’t want your body, but they’ll come and take your shit. People were losing their lovers and their homes in the same month. That’s a story I want people to know.”

Goller-Sojourner still marvels at the emotional brutality that defined gay life in New York in the mid-’90s. “This was a time when [someone] could basically look fine at Christmas and be dead by Easter,” he says. “You had your work life, then your activist life, then your caretaker life. There was nothing called ‘self-care.’ We were living in a state of emergency, and there was always someone with a bigger emergency than you.”

Amid this escalating crisis, Goller-Sojourner continued his long struggle with bulimia, which he described in his first solo show, Sitting in Circles with Rich White Girls: Memoirs of a Bulimic Black Boy, which premiered in 2008. His eating disorder morphed into an eightball-a-week cocaine habit after he figured out that coke was cheaper than bulimia in the city, where food was expensive and it was difficult to find bathrooms to support a rigorous purging regimen. After meeting a top club promoter’s assistant in the darkened make-out room of a gay club, he ended up on some of the best guest lists in the circuit. He had arrived—“If my people could see me now!”—and he was able to impress his high-society friends with pure coke straight from the Dominican dealers in Harlem, where white folks wouldn’t venture.

After five years, multiple rehab attempts and countless funerals, Goller-Sojourner found himself on the George Washington Bridge summoning the courage to jump. He was a miraculous anomaly, a young, Black, sexually active gay man in New York who had managed to avoid HIV even though he’d been “the whore of Babylon,” as he puts it. Despite the death that surrounded him constantly, making the jump was more difficult than he had expected. “Our bodies want to live,” he says. “We are built wanting to live. Dying is really hard.”

At that moment, perched between heaven and earth, he called out to God. The voice returned, flooding him with Bible verses, bits of hymns and sermons, the words of a street preacher who implored, “If you can’t trace His hand, trust His heart.” Goller-Sojourner stepped away from the bridge. But the voice was not enough. He walked home and slit his wrists, then had second thoughts, pulled socks over his blood-drenched hands and stumbled to the nearest police station. He woke up in the psych ward of Harlem Hospital and thought, “Fuck! Why couldn’t I have gone to a nicer hospital?” It was his only suicide attempt.

Goller-Sojourner’s stories are full of these laugh-to-keep-from-crying moments. He has a world-weary wit that avoids veering into cynicism; he stays earnest in the face of terrible absurdity. It’s a measure of grace he extends to the audience—and himself—in the midst of all the suffering.

Twenty years later, he still wrestles with a sense of profound personal loss. He looks around rooms full of people and doesn’t see many gay Black men his age. His unlikely existence is partly due to world-class luck and partly thanks to the upbringing that shielded him from the plague’s worst ravages. Unlike many of his peers, he had stable and supportive parents with solid middle-class jobs and good insurance, which afforded him weekly therapy in New York, rehab for drug use and treatment for his eating disorder. He was uniquely suited to overcome long odds—a fact that brings little consolation.

Goller-Sojourner admits to a sense of duty in his work. “I’ve been carrying these dead people,” he says.

“I don’t know if he would use this word, but I think Chad feels he has a responsibility to people who are minoritized—Black, gay, adopted,” says Tyrone Brown, a fellow artist-activist who directed Goller-Sojourner’s first show (Goller-Sojourner is directing Marching in Gucci himself). “He represents a strong tradition within the Black community as a griot and storyteller who’s doing it in a 21st century way.”

Goller-Sojourner admits to a sense of duty in his work. “I’ve been carrying these dead people,” he says. Marching in Gucci is how he honors those who died, binding them to history with the multiple strands of his own identity. It’s the only one of his three stories that still makes him laugh and cry. More than a remembrance of those he lost, it’s an expression of his determination to make art out of those frantic years, in which he fought to save others while doing harm to himself. It’s an account of improbable survival.