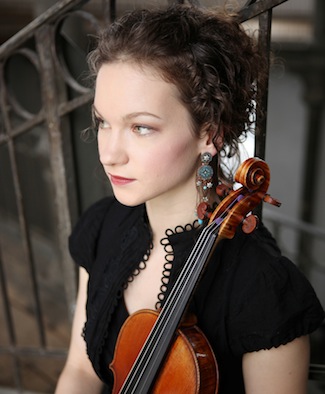 There are great expectations of Hilary Hahn whenever, wherever she performs, and this week at Benaroya Hall was no exception. Her performance of Sibelius’ Violin Concerto with the Seattle Symphony was no straightforward presentation of a familiar warhorse, but more an exciting discovery sounding fresh-minted. She was ably abetted by conductor Xian Zhang, a rising star, all the more so for being a young woman on the podium.

Zhang began the concerto by having the orchestra play so softly the sound stole on the ear, so that when Hahn came in with her violin, her playing stood out in stark relief to the orchestral murmur. The two were clearly in close communion and agreement as to how the concerto should go, and the result was a dramatic performance by both soloist and orchestra.

Hahn’s extraordinary technique allowed her to encompass with ease demonically fast runs and arpeggios, often playing on more than one string at a time, yet always making music to reach the soul. The tone she drew from her instrument was rich, warm, resonant and even, no matter whether she was at the bottom of the range or the highest reachable notes, loud or soft, every note a pearl of sheer beauty, her quiet playing exquisite.

This is a concerto which requires considerable athleticism from the performer. The slender Hahn wore a simple black dress with a top which was more like a plunging bikini, attached to the skirt only by a short strip at the waist in front. Because of its plainness, it was not distracting. What it did do was make clear how much she needed those arm and back muscles in toptop shape to play as she does. The result was fascinating.

Responding to tumultuous applause from the audience, she played as encore, a perfect choice after the drama, Bach’s unaccompanied Gigue from Partita No. 3 in E major.

The concert, which is repeated Saturday, began with the Sibelius Overture to Karelia, and after intermission came the U.S. premiere of French composer Pascal Zacaro’s La Bataille de San Romano, a musical response to Paolo Uccello’s triptych portraying the fight. The battle was in 1438, the paintings also 15th century, and Zacaro followed a custom which has been going on for centuries.

In his music you hear the early dawn with birdsong and the army stirring, then the fury and chaos of the fight, and afterward, the dusk and the birds sleepily settling for the night. He evokes an open sound, somewhat Coplandesque, using instrumental contrasts with nice use of individual timbres, and the 11-minute work, written for the Seattle Symphony and the Orchestre Nationale de France, received a colorful performance from the orchestra.

The concert ended with Beethoven’s Symphony No. 7 in an upbeat, joyous performance.

Zhang, who directed this without the score, is a clear, decisive conductor who uses her expressive left hand and wrist to signal nuance while keeping the beat with her right. She brought authority and propulsion to the Beethoven while using the whole dynamic range, including some remarkably beautiful soft playing from the strings.

Her Beethoven was on the robust side, and while it was a valid interpretation, I’d have liked something a bit gentler instead, in contrast to the rest of the program which was all vigorous, energetic and lively.