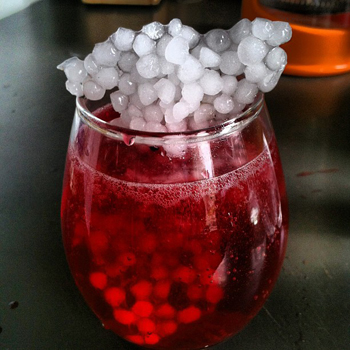 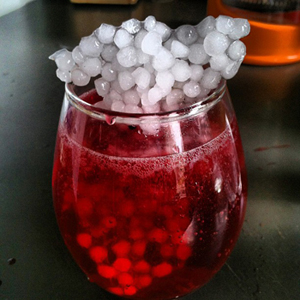 What do you do when April showers turn into apocalyptic hail storms? Make hailstone vodka crans, thankyouverymuch!

Thank goodness it wasn’t hailing for the Blitz art walk Thursday night. A few months ago Pike/Pine was named one of ArtPlace’s Top ArtPlaces. Despite the painful nomenclature (worse than Humbert Humbert or Joseph Heller’s Major Major Major Major!), the Pike/Pine corridor has turned out some killer gallery shows lately, and just might be on the way to earning itself a place on the map as an art destination.

This month, the Second Thursday art walk on the Hill—otherwise known as the Blitz—was electric. As the sun set like heaps of sorbet melting on the Olympics, I put on a pair of my favorite ombre pastel tights and black velveteen stilettos and clicked down the street to True Love Gallery, where Steven Miller had curated the huge group show (Polari) of super-queer art for the super-queer ‘Mo Wave Festival. The packed place was a good place to start the art perambulations. Lots of wine, candy, good-looking people and art that’s erotic without being scandalously cheesy. I loved Chris Buening’s installation of sketchbook drawings, which spanned a wall by a stairwell. I’ve seen his sketchbook installations before, but never one as sexy and explicit as this: hairy men like hung sasquatches pinned next to cartoons of love-struck dinosaurs and no-nonsense text instructions (“Fuck me”.) 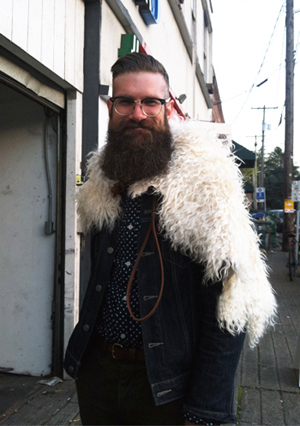 On the door to the toilet, Jess Wamre’s Don’t Look Down was the perfect tribute to every piece of urinal art ever. His halftone screen prints available in five colors are a ridiculous deal at $50 a pop.

Around the corner, a new Adam Boehmer piece caught my attention. Boehmer is one of the rising stars of Pike/Pine. He’s everywhere this year, making music, art, poetry and style statements like this angora goat pelt caplet he was wearing Thursday night. (He says he purchased it at McPhersons leather supply, bien sur.) His piece in Polari, a collage called Pulp & Timber Co., was made from a 1941 arial photograph of the Bellingham-based Puget Sound Pulp & Timber Company. The mounted photo had been carved out in three places, where Boehmer inserted fragments of crumpled, glossy pages from a vintage porno magazine. Fields of fleshtones ruched like quilted material are pressed sumptuously under glass. I won’t do a disservice to the work by posting a photo of it here. Go see it in person.

I’m ashamed to admit this was the first time I’d been to Hard L, the few-month-old, women-operated gallery and performance space that was inspired by the SAM Elles show and conversations about underrepresented female and queer artists. It’s located on the second floor of the Pound Gallery Compound on 10th Avenue and has the dilapidated charm of an old industrial space with original slatted wood walls lacquered in decades-old paint. As I reached the top of the weathered steps, I glimpsed a gallery packed with people intent on taking in the last five minutes of a nearly hour-long performance, called Blind Faith. It was part of a show by artist couple McKenzie Porritt and Taylor Pinton. I’d heard it would involve stick ‘n’ poke tattoos. 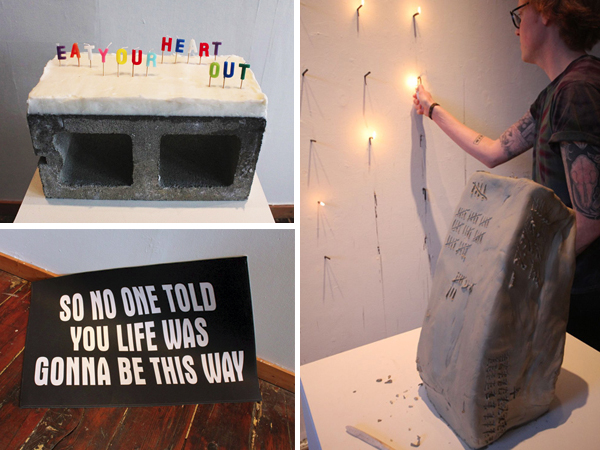 In the gallery were a slew of romantic declarations, or, as per the statement, “sculptural sketches of the things that bind us together, and of the things that keep us apart.” There was a cinderblock birthday cake topped with five pounds of lard frosting and candles that spelled “EAT YOUR HEART OUT.” Across the gallery, a block of clay with a 37 hash marks carved into the surface represented the number of people Porritt and Pinton had collectively slept with. Its title: You’re Number 37, Have a Look. Visitors were invited to carve their own number into the block and light one of 37 black candles on the wall behind the block, and many had. But all that was on the periphery, and at the moment I arrived, the performance taking place in the middle of the room had everyone hushed. It was more than the simple tattoo exercise I’d expected. An exhausted Porritt was slumped over, cheeks flushed, one arm trembling and clinging to the end of a red rope. Her other arm was inserted through a hole cut in a wall the artists had built in the gallery. This wall was unsupported except for Porritt, who was holding it up. The red rope she had wrapped around her free arm was looped through an anchor in the ceiling and at the other end attached to the top of the structure.

On the other side of the wall, Pinton was tattooing. By the time I’d arrived, Porritt’s arm was red and swollen. She had no idea what her girlfriend was tattooing on her arm. 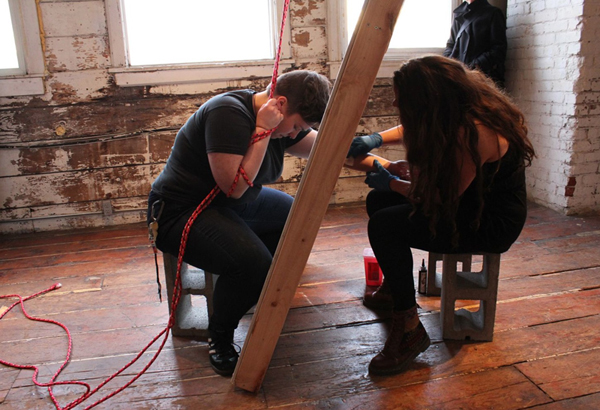 Someone at the event mentioned the apparatus reminded them of Matthew Barney’s Drawing Restraint. Someone else mentioned Chris Burden. Both the Hard L artists have made use of restraints or physical endurance in the past: at last year’s NEPO 5K, Porritt stacked bricks onto fellow artist Lindsey Apodaca, who was sitting in a wheelchair, and pushed her the entire distance from Beacon Hill to the International District. At the same event, Pinton, along with artist Ruth Marie Tomlinson, scattered a trail of salt along the 5K route from one end to the other, then turned around and swept it all up.

The conspicuous display of effort in these performances risks reading precious or derivative, but it doesn’t. It feels sincere….and breathtaking. Perhaps because they engage friends and lovers in these actions, Pinton and Porritt’s effort has literal push and pull, palpable emotional risk. The tension doesn’t exist in Herculean, machismo-laden theatrics or as a high concept art game per se, but as a physical extension of the risks of real relationships. And because the participants are both female, the lovers’ discourse (much like Roland Barthes’ text of the same name, in which the referent lovers are both male) takes on a narcissistic or reflexive tone. The lover is a reflection of the self, the lover is the unseen other hidden from view, the lover is the unattainable object of desire. This evening, the artists’ audience was also the lover. We carved our notches into the clay.

As it turns out, Porritt and Pinton have only been a couple for about a year. Getting a tattoo of a lover’s name or a declaration of commitment is usually a terrible idea. In this case, the act transcended itself, and we were all lovers for a moment, even if—yet—separated by walls, by histories, by skin, by lard.

(Porritt’s new tattoo spelled out in curly cursive, darling if you want me to.) 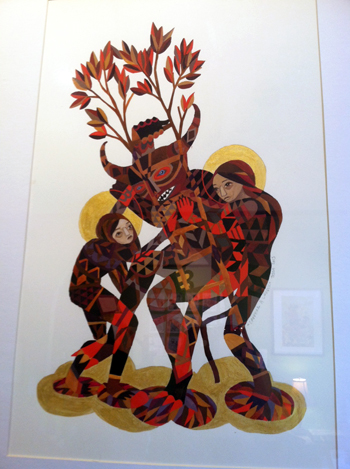 AND OTHER LOVERS’ QUARRELS
Over at Joe Bar, polymath artist Tessa Hulls has a handful of very pretty paintings on the walls. The show, titled So Goes the Battle, is a tribute to a recent breakup, which sounds kind of harrowing, but Hulls’ paintings are great, so it’s forgivable. The pictures are illustrative renderings of beautiful, weird, Where The Wild Things Are-type monsters, set against metallic gold backdrops that give them the feel of medieval manuscripts. Perhaps most interesting, though, are the 20-some pages of a comic book Hulls made at the last minute for the show, pinned in a grid on the west wall of the bar. Made in lieu of an artist’s statement, the book tells the story of Hulls’ breakup through the lens of characters in The Great Gatsby. The mashup story is sentimental, vulnerable, and it works. Reproductions of the book were gone just an hour into the opening, but the original pages pinned to the wall are better anyway, as they include her pen and ink blots, scratched notes and other marginalia bleeding onto the edges of the paper.

It doesn’t take a lot of sleuthing to figure out who Hulls’ ex is, especially since the ex in question also recently showed work at the same venue—a fact she references in her book. So goes the battle when your local arts community is just so large and you can’t resist the je ne sais quoi allure of artists, or getting into bed with them….

I SADLY MISSED THE APPARENT MURDER OF A FOREIGN AUTO MECHANIC, AMONG OTHERS
Unfortunately, I had a raging tax-induced headache (am I right?) Wednesday night and missed the opening of Dreamland Sinkhole at Hanita Schwartz’s new Columbia City venue, Andralamusya. But I got a mysterious text from Max Kraushaar that evening asking where I was. “You were in my art,” he said cryptically. Apparently, his performance included mass texting with the audience and his mother. I hear it was a packed house and everyone was mad for it. Once-upon-a-time art reviewer Jim Demetre graciously contributed his synopsis of the event:

“Dreamland Sinkhole was the most entertaining art event/performance I have attended in recent memory. I cannot recall the last time I laughed so hard at a group of performers on stage. Four works, by artists Britta Johnson, Klara Glosova, Aidan Fitzgerald and Max Kraushaar, were presented to the audience by host Graham Downing and followed by a live improv piece that used it as a point of departure. The players, Ian Schempp, Andrew McMasters and Kate Jaeger, were hilarious and strangely insightful. Who would have found armed survivalists in Johnson’s videos, love-struck psychotic stalkers in Glosova’s sculpture or the murder of a foreign auto mechanic in Kraushaar’s texting? (Just a few randomly selected revelations, I might add.)  The evening culminated with Adam Boehmer’s reading of a more sober yet equally delightful poem he had composed during the course of the show in response to all that had unraveled onstage.

Creators Graham Downing and Ian Schempp offered the Seattle art scene a satyr play to answer the tragedy of silence that too often follows the public viewing of its visual art. I hope they do it again. There’s so much ground to cover.”

NEXT WEEK IN THE ARTS
John Boylan’s Next Conversation: “Trash!” at Vermillion Gallery. Have you ever been to one? Boylan’s conversations are sometimes so packed and get so heated, he can barely keep a leash on them….in a good way.

Thursday, April 18: Erin Frost’s solo show re/semblance at Vignettes. Frost is a fox. She’s also smart and has spent much of her life thoughtfully and sensually documenting her body, home and life in a variety of media.

Saturday is the fourth of five planned Greenwood neighborhood crawls: bars and cafes, art and poetry. I haven’t been to one yet, but if you’re in the neighborhood, it should be fun.

Sunday, April 21st: If you haven’t seen Now Here is also Nowhere: Part II at Henry Art Gallery, this is a good time to do it. Luis Croquer, Deputy Director of Art and Education at the Henry is giving a tour of the compelling show, which he curated.