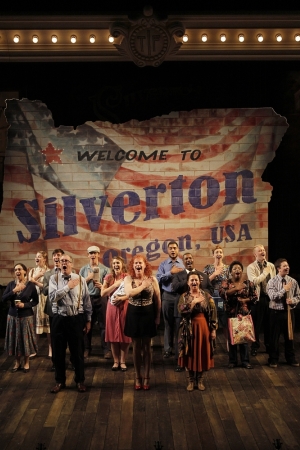 A new musical about America’s first transgender mayor called Stu for Silverton recently hit the boards at Intiman Theatre Festival. The buzzworthy topic, youthful creative team and Pacific Northwest tie-in (Stu Rasmussen is the mayor of Silverton, Oregon) magnetized local media coverage and word of the production spread long before it was up and running.

After three preview performances, Stu For Silverton had its public opening on July 20, but City Arts didn’t publish a review, as we did for the Festival’s three other productions. Here’s why: Intiman asked us not to. Lest you think the company was pulling something shady or I’m kowtowing to the theatrical powers that be, there was a good reason for this request.

Intiman didn’t ask because they’re trying to cover up a stinker of a production. Rather, Stu kicks off a new Intiman initiative called “Start Up Stagings” that allows writers the rare chance to develop a new project while it’s in production. An unwarranted review can cut a new show off at the knees. Stu’s producers wanted a little breathing room and we gave it to them.

Information on the Start Up Stagings program is found on the Stu for Silverton page on the Intiman website: “Through a commission, workshop and full production, this program provides creators and audience with the chance to develop together a brand new piece of theatre for the national stage. The show will not traditionally ‘open’ and will be improving right through closing night. Your support, feedback, and investment are key to the future of this new American musical.”

The performance I saw on July 20 could be different from one that plays in August and even further removed from the musical’s final performance on September 15. It could also be much the same, of course, but Stu’s bookwriter Peter Duchan and composer Breedlove will be back in Seattle in August to keep working, and chances are good that change is coming. The show isn’t perfect. There’s work to be done. That’s the point.

Traditionally, opening night is when a show is “frozen.” At that point, changes are no longer made, and often the director flies off into the night, never (or rarely) to be heard from again. That is why reviews are posted after opening—because the show described in the review is the show a ticket buyer should expect to see. When that’s not the case, picking apart a musical number or critiquing a scene is misleading, as they could be on the cutting room floor soon enough.

Forbidding critics from discussing something makes us salivate to do exactly that. But this Stu situation is hardly akin to Broadway’s great Spider-Man: Turn off the Dark debacle of 2010/2011, in which some of New York’s major theatre critics broke a review embargo set by the show’s producers. In that case, the show had already been up and running for two and half months and premium tickets cost hundreds of dollars. Spider-Man didn’t work technically or artistically, and its producers were simply trying to stem the tide of endless negative publicity as they frantically got their shit together. They were covering up a mess, which is very different than providing artists with a safe, creative workspace.

Intiman is charging for tickets to Stu, but their website and Facebook page make it clear that the show is still under construction, so that audiences know what to expect. Artistic director Andrew Russell isn’t twirling his mustache as uninformed arts lovers march toward his nonprofit box office and toss in their hard-earned cash.

Intiman is doing more than opening a new musical. It’s doing something positive for the regional arts community by increasing Seattle’s position as an incubator for talent, both foreign and domestic. A developmental production is not the same thing as an out-of-town tryout, which is a production designed specifically to give producers a chance to see a fully-formed play or musical up on stage before trying to move it to Broadway. Giving developmental productions like Stu room to grow doesn’t make Seattle the Cayman Islands of the American theatre world, where a new show can open with impunity. It makes us a fertile breeding ground for new, exciting work.

It’s rare for theatre creators to see a full production of their work while it’s being created. That’s an invaluable opportunity, because nothing is the same on the page as it is on the stage. Having the chance to hear words read and songs sung and jokes land (or not) with an audience gives them a major leg-up over things like staged readings and workshops. Writers and composers don’t have to take the safe route, guaranteed to please. They can risk failing, and failing big, in the service of creating something spectacular.

Writing a review of a work in progress places regional theatre critics squarely in the business of consumer reports. Thumbs up, thumbs down, move on. Criticism should be more than that. It should start a conversation. It should create context. It should respect the arts community it supports.

It’s fair to review a production because arts lovers deserve to know what they’re spending money on. But in this case, patrons are also spending their money on growing Seattle’s theatre community, and more than enough information on Stu is available for them to make an informed decision. It’s a decision we should trust them to make.