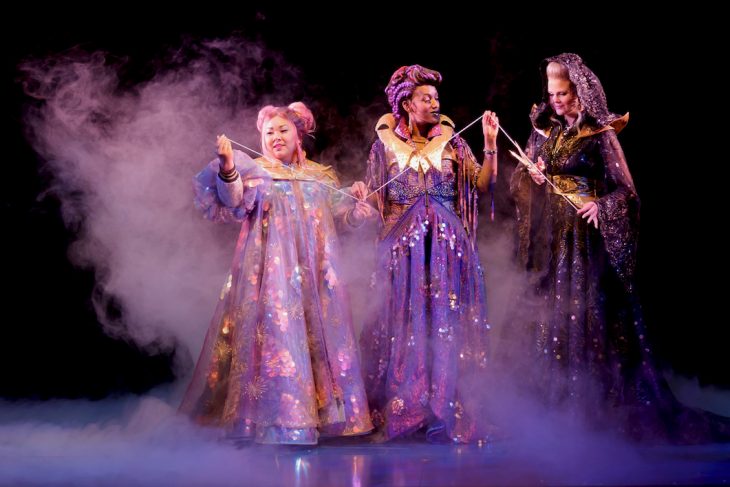 There are no stories more universal than life and death. One could argue that all stories are really about life and death, but we’re gathered here today to talk about two very literal yet very different, musical approaches to the life-and-death narrative: String, which stars the three Greek fates responsible for weaving and snipping every mortal’s string of life; and Ride the Cyclone, which lands us in a freaky afterhours carnival of a purgatory where six recently deceased teenagers defend their short lives.

String, directed by Brandon Ivie, is currently up and running at Village Theatre, where it has been in development for several years. The world-premiere musical features music and lyrics by Adam Gwon and a book by Sarah Hammond. As our story begins, in smoke and starlight, the three Fates are banished from Olympus by Zeus after snipping the life of a woman he was involved with. Down on earth 3,000 years later, they’ve taken up residence in the tippy-top of a skyscraper, determined to always be as close as possible to their home and their mother, the night. Bubbly little sister Clotho (Sara Porkalob, though the press performance I attended featured understudy Sarah Bordenet) spins the string, creating new life in the universe. Angry middle sister Lachesis (Lauren Du Pree) measures the length of the string, and Atropos (Jessica Skerritt), the serious, taskmaster oldest sister, is responsible for the snipping. They spin and snip, weaving the tapestry of the universe across the millennia.

Two-hundred floors below, a security guard named Mickey (Eric Ankrim) whiles away his days, working overtime, eating Lean Cuisines and watching people on security cameras. Atropos, who occasionally takes “me time” in the elevator while her sisters are sleeping, is one such person. The two first meet when Mickey interrupts her wee-hours elevator ride; they meet again when she visits him in the basement hoping to find the very special string-snipping scissors she left in the elevator in the lost and found.

Gwon writes a glorious melody, capable of luscious stand-and-delivers and chatty scene-setters and everything in between (for a good cry, listen to “I’ll Be There” from his Ordinary Days, a favorite among Broadway leading ladies). Skerritt’s finely milled vocals sound delicious on her first-act ballad “Uncharted Territory” and Du Pree, with a voice more steel than silk, is on my current list of “would listen to sing the phone book” performers, though Clotho’s songs were a hair out of Bordenet’s comfortable range.

String is heavy on the chatty scene-setters and light on the load-bearing numbers, which leaves the story, as a whole, feeling over-explained but underdeveloped. Life’s minutiae—work, elevators, the weather—get a lot of stage time, but why and when Atropos and Mickey fall for one another continues to escape me.

Mickey is supposed to die in an elevator accident, and Atropos can’t bring herself to snip the string of the kind security man. His mid-show brush with death prompts him to really go for his dream girl in the elevator and fall for one another they finally do. But now there’s a flaw in the tapestry of the universe—what’s a Fate to do?

I think you know.

String is so well done, each element thoughtfully and quite beautifully crafted. In addition to some lovely performances and Gwon’s impressive score, Harmony Arnold’s costumes, Tim Mackabee’s set and Robert J. Aguilar’s lighting are all critical pieces of a stylish, memorable show.

But there’s ultimately a “so what?” quality to String, which can at times feel like a half-hour sit-com stretched over a feature-length frame. It’s ambitious in scale but surprisingly unambitious in story, every character aggressively likable and entirely unchallenging. (Also, I’ve said this before and I’m sure I will say it 1,000 more times, but writers, “hungry” is not a personality trait. Please find another way to signal whatever emotional state it is you’re trying to convey.)

Even at their darkest moments, such as when Mickey is wrestling with the knowledge that his continued existence is imperiling the universe or when Atropos is roiling in her own decision about his life, no one does anything objectionable. (At least not on purpose: Atropos lays down some very specific ground rules about what she and Mickey can and can’t do, what they can and can’t discuss, which Mickey later ignores in the name of romance—a rom-com trope I’m pretty sure is on the way out.)

As written, there’s ostensibly more to this story than love—namely the relationship between the three sisters and their dream of returning to Olympus, but with a lackluster effort made to make us really care about all of these characters, it’s hard to emotionally invest in their fates.

Ride the Cyclone is far less glossy but far more surprising, a bizarre and unexpected show that does whatever the hell it wants, as long as it’s fun. A co-production between the 5th Avenue Theatre and ACT, Cyclone is now running at ACT, directed and choreographed by Rachel Rockwell. The musical, with book, music and lyrics by Brooke Maxwell and Jacob Richmond, began life in a fringe theatre in Victoria, BC, and now celebrates its Seattle premiere after successful runs in both Chicago and off-Broadway.

After a haunting musical introduction by a creepy baby doll we meet our real narrator, The Amazing Karnak (Karl Hamilton) a morbid carnival machine that predicts the place and time of your death. Tonight, however, he’s here to referee a game of sorts, when six members of a small-town high school choir meet their end on a faulty roller coaster and come hurtling to join him in this warehouse. I mean, the afterlife. And what are they doing here? Making their case to Karnak for why they should be the one person allowed back to the land of the living. Through song.

“Tonight, I wish to give them the chance to express not what they were perceived to be, but what they dreamt they were.”

And that’s what we do. For the next 90 minutes, we get to know these six kids, who they were, who they wanted to be, and all in the name of the unanimous vote that will send one of them home. We may know where we’re going, but we have no idea how we’ll get there, or what will happen when we do. Karnak is a fickle, unreliable host, but he does the kids the favor of teeing up their stories with some photos, fun facts (birthday, star sign) and a brief introduction of their life to date.

Each of these kids gets a chance to tell us about themselves and they all have surprising interior lives, which is the point. Ocean reveals the true, cruel depth of her Tracy Flick tendencies (“Mischa, I even celebrate your culturally ingrained alcoholism!”). Noel’s secret desires unfurl on a cabaret chair, Mischa raps in autotune, Ricky battles alien-cat-people and Constance shares a piece of personal information that would be shocking if it weren’t so sad.

And then, the aforementioned baby doll, Jane Doe (Emily Rohm), a “mystery contestant” who sadly lost her head in the accident and remains unidentified, manifests in this netherworld-warehouse as black-eyed, blonde-haired and stiff-limbed. Rohm’s lilting, clear soprano, tinged with reverb, is both gorgeous and as eerie as a broken calliope.

The songs aren’t always slick musical theatre fare—when Karnak warns Ocean, “don’t bore us, get to the chorus” he’s presaging the show’s format because these eclectic, stylishly character-specific numbers love love love a hook and a chorus. And you know what? That’s fun.

Ride the Cyclone’s most powerful achievement, for me, was making me care about each of these kids, and consider what they’d wanted in life, what they’d been through, what they’d achieved or failed at, that all of it mattered. So they mattered. The largely excellent cast also deserves plenty of credit for bringing humanity to what could be cartoon characters, introduced through progressively bigger and bigger, more elaborate production numbers. They’re cartoonish, don’t get me wrong, but these cartoons are drawn with integrity and developed through detail and not awkward exposition.

For how much I loved this show, there’s actually plenty about it I didn’t like. There is an overly tidy, moralizing ending, as well as a very awkward final B-roll montage (also, my kingdom for a depiction—somewhere, anywhere—of a “valuable” female life that doesn’t have children in it). Sometimes the jokes tip into eye-roll territory, occasionally hindered further by a wooden delivery.

But this show actually had jokes I hadn’t heard before in some form, including a pre-show “turn off your cell phones” speech that actually made me laugh, and “clever” cell phone speeches have been the bane of my existence for years. There’s energy and originality, lo-fi theatre magic and a stage full of fabulous, idiosyncratic voices (literally and metaphorically). It’s about weird and funny, not polished, G-rated perfection. In some ways, Cyclone harkens back to that hokiest of power mantras, beloved by guidance counselors everywhere: there’s nothing more powerful than being yourself.