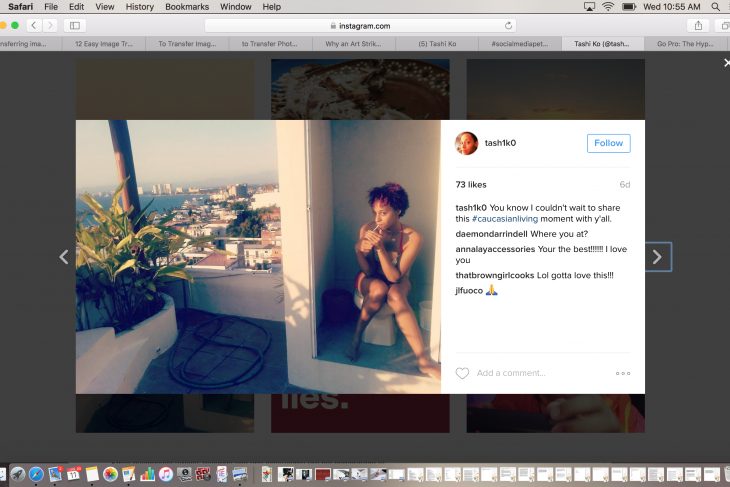 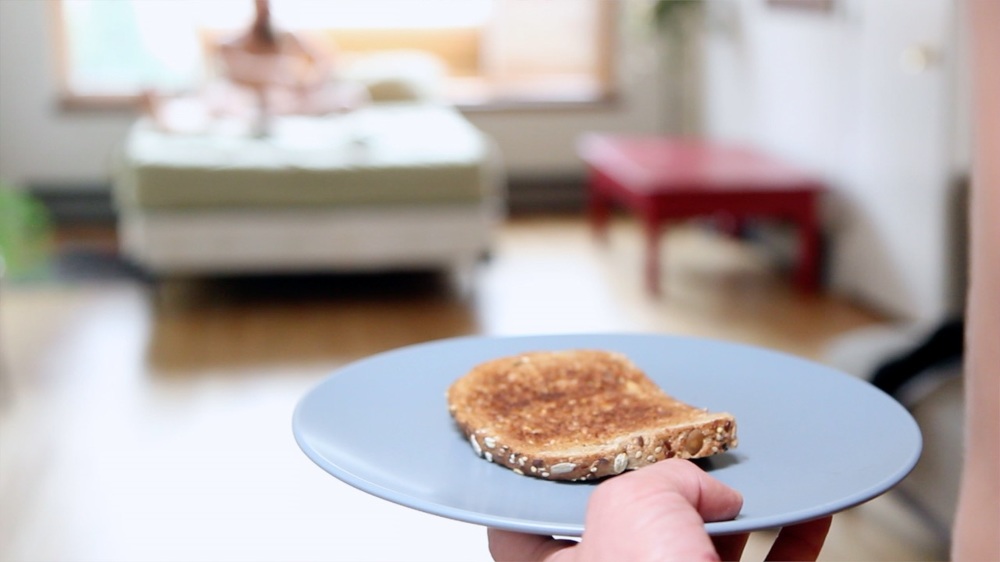 For most of us, 2016 expired with the anti-charisma of a moldering turd. It hobbled across the finish line like a self-medicating drunkard that must dull the pain at any cost. The year fouled out.

I hoped the new year would be a bit better off, but in 2017 the art world is already overwrought. In the past few days alone my social media feed has been clattering about whether or not a heart emoji on one’s Facebook wall is tantamount to social media crime, and whether or not galleries should go “on strike” and close in protest on Inauguration Day. (As of this morning, there’s more on the subject here, here and here.) I think we can do better than that.

I know we’re all hurting, but I hope 2017 is the year we—the royal, collective art-world we—cut loose from the tornadic thrall of social media, cut back from the creeping culture of smug one-upmanship, put our heads down and make more work.

I am of the opinion that art cannot and will not save the world. To this day I’m not 100 percent sure what art does, but I emphatically don’t believe it saves. It communicates experience. It creates a space of shared intelligence and emotion. It effects change gently. It perhaps raises money for causes or blasts messages emphatically. But it does not save.

That said, last year, four artists provided a sense of direction we should heed in 2017. They represent four very different but equally and urgently necessary kinds of cultural gestures.

First, Ethan Folk and Ty Wardwell generously offered their ongoing collaborative performance called “cute & nonthreatening.” The three-part, months-long project comprised a series of video and durational performances. “In this time and place,” Folk said at the intro to the final part of the performance, which took place at Velocity a few weeks ago, “we’re kind of uncertain about the role guys like us have in making art.” They proceeded to answer their self-doubt, in part, by offering a wild enough variety of platforms to please and perturb anyone. With a calculated coyness, they presented performances with a side of laughter and off-the-cuff quips, but their content was vigorous, pitting masculine vulnerability against vanity by adapting tried and true mediums, from prop-based improv to pornography. 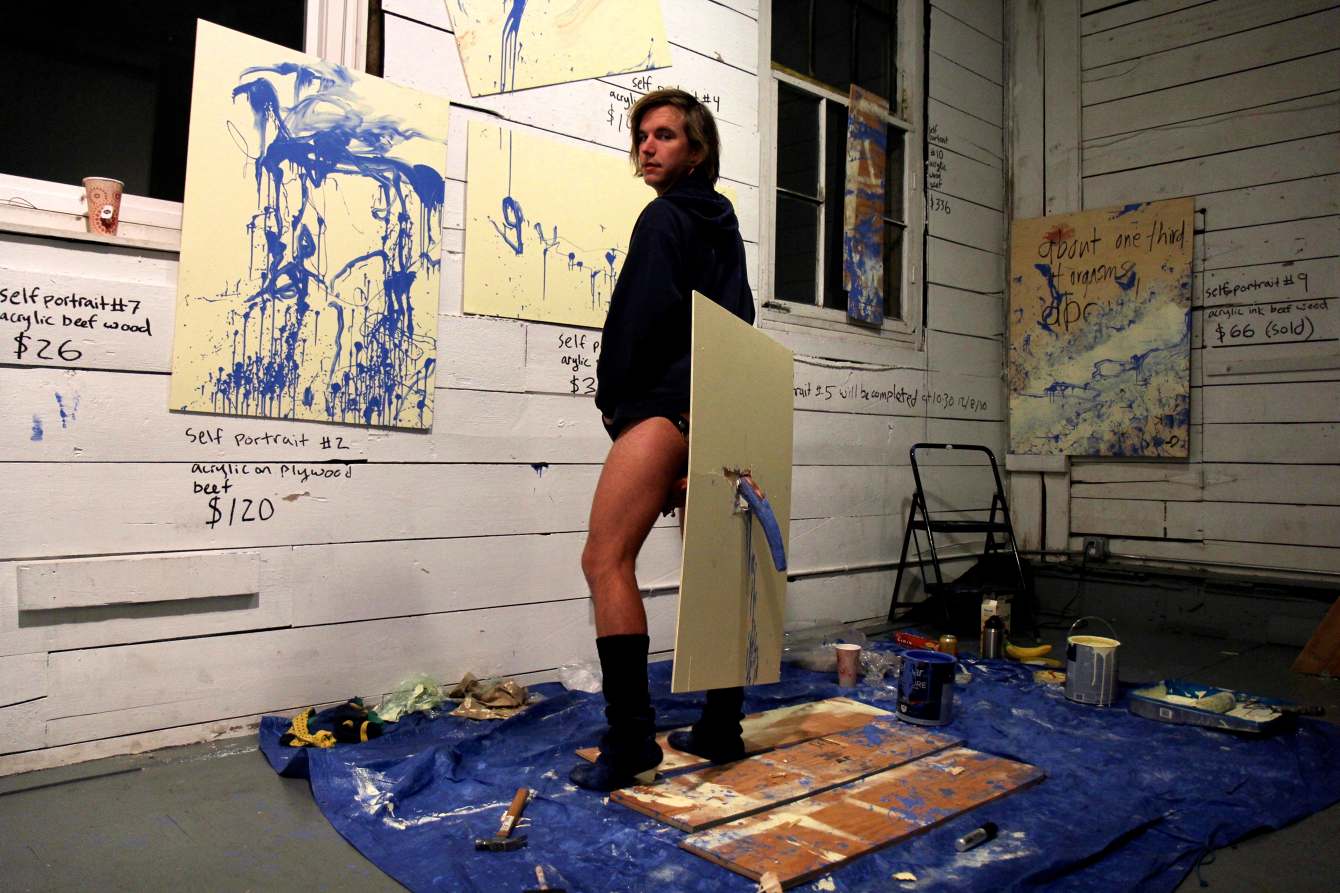 For the second part (titled “about one-third of orgasms”), Wardwell presented his own brand of action painting at the Factory when he stripped down to a strap-on harness that had been put on backward and wedged a real, raw oxtail through the opening. For the next few hours he dipped the tail in a gallon of electric blue paint and drew designs across large wooden panels. Upon completing each one, he hung it on the gallery wall and assigned it a title and price.

The piece mashed up classic erotic beauty (Wardwell’s performer’s body is extra-taut from peddling a pedicab by day) and the stricture of absurd durational performance—still chic in 2017!—while maintaining a pronounced queerness that begged to gross out the weak of stomach. It hit plenty art history tropes: Yves Klein; Carolee Schneemann’s feminist piece de resistance Interior Scroll; the athleticism of Matthew Barney’s Drawing Restraint; the defiantly sexual, anti-Catholic masculinity of the Vienna Actionists, who used carcasses and pieces of flayed meat as canvases upon which to exorcize histories of violence in post-Nazi Germany. The work was unapologetic and aggressive and didn’t give a shit what anyone else thought.

I ache for more of that in Seattle. Ah, Seattle! On the fringes of the art world, where you’d think artists would behave unfettered, rather than with the conservatism we’ve dished for decades. Finally that tide seems to be turning with a generation of 20-something artists who give no fucks. It’s about time—and just in time.

Perhaps the biggest splash made by a local artist last year was Natasha Marin’s Reparations, which repeatedly received national and international attention. The project is as pragmatic as it is conceptual, providing an online platform where people of color can make requests for services, help or material provisions, and where people of privilege can offer up those things. Marin didn’t create Reparations as a side “activist” project: It was Marin the artist making art. Like much of her subsequent work (including tea ceremonies staged at locations around the world), Reparations created space for interaction, a place for distribution and sustenance.

Marin is also one artist who demonstrates ways to interweave networks and social media into the fabric of her work, to make it function as a medium for subtle (in some cases not subtle) commentary underlining how white supremacy has infiltrated all aspects of life, down to visual culture evolved on platforms like Instagram. Last year Marin became very vocal on the subject of self-care. As an artist, mother and woman of color, her deliberate advocacy for her own self-care, from foot massages to therapy, was a defiantly political act on many levels. Her recent employment of the hashtag #caucasianliving on her Instagram selfies offers a hilariously scathing layer of commentary to contrast the self-care available to people of different racial and socioeconomic backgrounds, as well as the style of exhibitionist self-portaiture that has arisen to often unwittingly illustrate it. 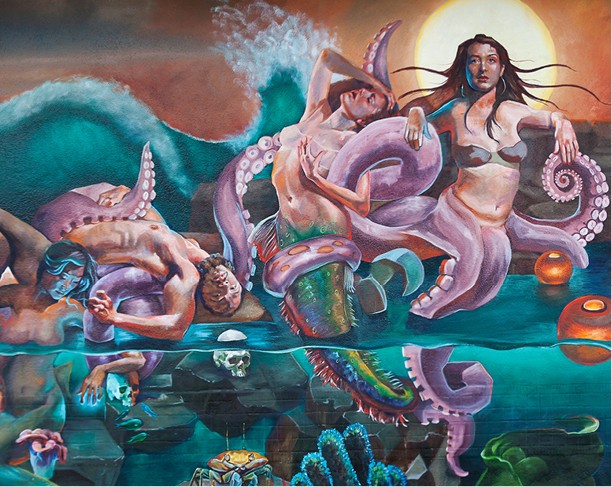 Also significant was Crystal Barbre’s controversial mural at Deja Vu. Across from Pike Place Market, at an intersection with heavy foot traffic, and right smack on the facade of a strip club, Barbre’s aquatic dreamscape sexualized the male and female body alike, transforming her subjects into mer-folx. When the city came down on her for portraying exposed nipples on the females, Barbre brought the issue to the national limelight. She could’ve perpetually regurgitated the conversation on Facebook, but instead she mobilized friends and media and got the attention of outlets like Buzzfeed.

Finally, there’s the kind of artist whose work is less message-driven and therefore harder to contextualize in terms of the weight it carried in 2016. When I first encountered Liz Tran’s big, bursty abstract paintings, they didn’t really sink in, due to lack of screaming narrative. But as I got to know her ouvre better last year, her work unfolded as a quizzical universe without end, where particulate elements tirelessly spin out, forming tenuous galaxies from canvas to canvas, composed of paintball goo and birthday cake colors. This world is a joyeux crime scene spatter, where blood and guts have been replaced by frosting and supernova shimmer. Tran’s steady repetition ushers in a metronomic regularity of color and pattern that reassures like a heartbeat. And while it doesn’t vary much at first glance, it crackles, tickles and agitates with sneaky neon frisson. 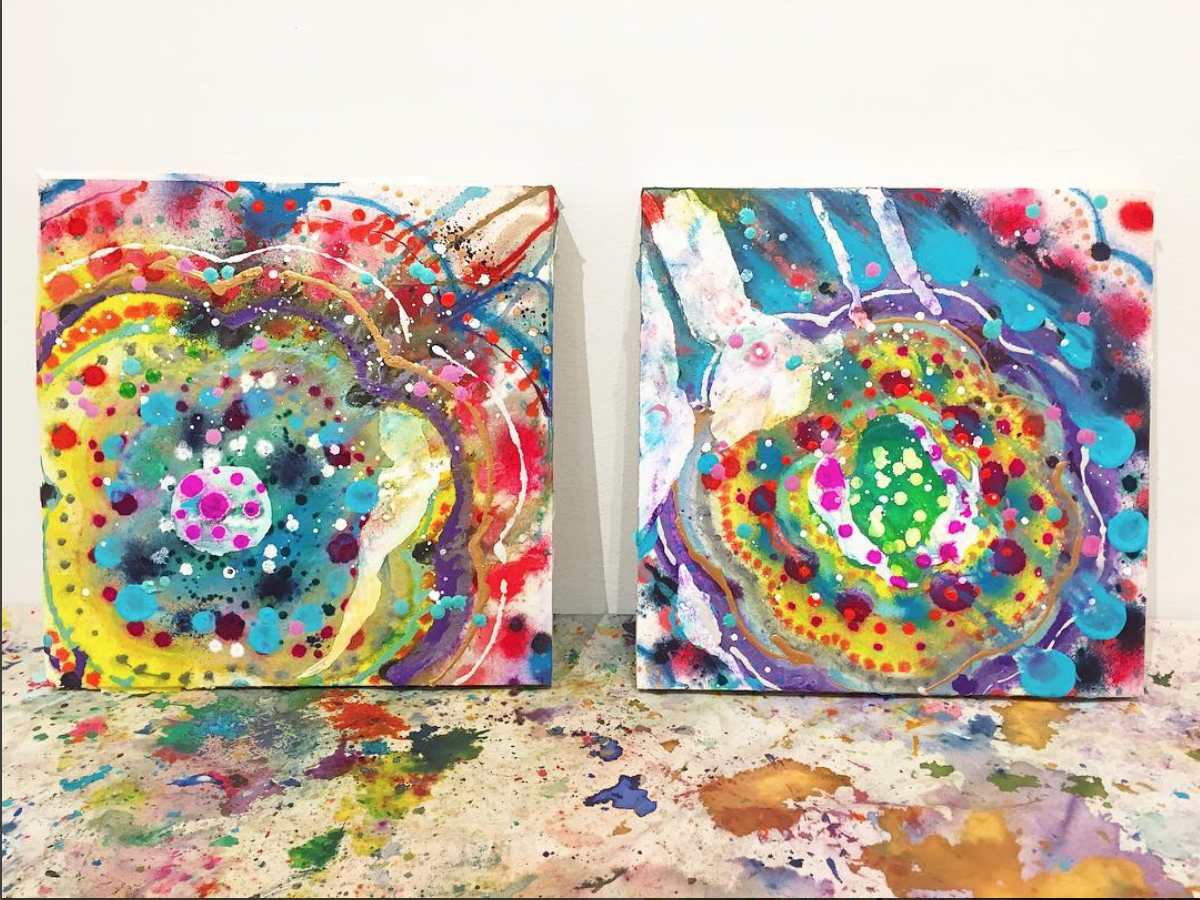 In their continued, tenacious focus despite ups and downs of every stripe, art-producers like Tran shined as a political force in 2016. There are so many artists working quietly and steadily like this, amassing a body of work tantamount to a roar. The artist Akio Takamori leaps to mind, who passed away a few days ago after years battling cancer. He was a paragon of this kind of artistic approach in the way he treated creation and labor, and in the process of his lifetime he gave birth to and peopled entire worlds.

These artists are especially important to consider when thinking about whether art for art’s sake is a thing anymore, whether art is inherently political or whether artists must by default be political in this era. What is the artist to do, as we fumble through the political landmines scattering across the 21st century, as we gear up to repeat mistakes of the 20th? Work as usual, resisting catatonic bouts or the temptation to quibble to death the merits of forms of protest that were not designed to serve the art world and artists. Artists have always been forced to work around the fringes of the American Dream of health and wealth. Even in the best of times they have systemically hatched social, political and economic solutions that deviate from the mainstream, simply to get by. Artists are (sadly) economic outsiders in America, too often hustling round the clock just to ride the poverty line. A long-term commitment to make art, to work doggedly at it, is an anarchic rejection of long-established American values.

A recent Artnews article articulated the tension between two particular routes an artist can take. One route emphasizes the production of objects and branding; the other takes on large-scale projects like social practice, activist practice, installation, etc. The most successful, sustainable artists do both. Or rather, they find ways to make products that descend from the larger project. When I look for the thread between my favorite artists of 2016, I think it’s partly that they’ve been doing this all along. They remain limber and evolve. They work smart and hard.

In the same way I believe art won’t save, I believe an art strike won’t punish the wealthy collector or burn down the art market. Small businesses—artists, galleries and institutions alike—are not comparable to unions or large market forces and the message #J20 strikers hope to send will be yet another passing distraction for well-meaning busybodies. The greater urgency for artists to consider is how, if at all, they might more effectively make work of lasting consequence. Think bigger, reject the conservatism lurking beneath the surface of our scene, and continue to make art that builds on empathy, pragmatism and ideas of breathtaking scale.

Images courtesy of the artists.