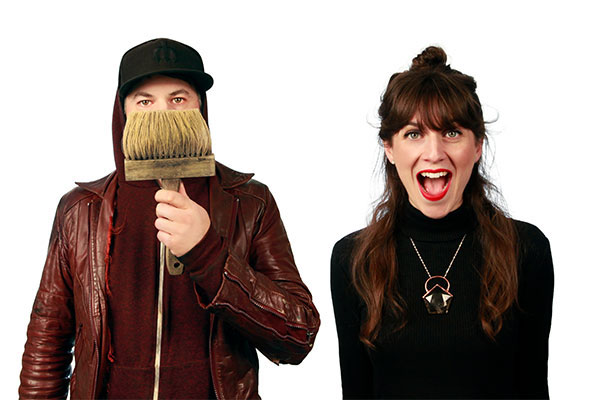 Molly Sides and No Touching Ground are no strangers to the pages of City Arts. Sides is known for her prolific work on stage, as choreographer/performer and as the frontwoman for the rock band Thunderpussy. No Touching Ground has been making street art—in the form of hand-painted, photorealistic wheat pastes that lean into political critique—for more than a decade. To see his work you’ve got to pound pavement or creep through the wilds of underpasses. They’re both expert at blending high-brow and low-brow, esoteric and accessible.

When the two artists signed on to collaborate for Genre Bender 2017, they decided to travel to the Women’s March in Washington D.C., where they walked the eight-hour route together. NTG had a GoPro strapped to his body, gathering footage and sound bites that he and Sides might end up using in their performance.

“We thought in D.C. we were going to capture this moment,” Sides says, “delve into the politics of women’s bodies and what it means for so many of those bodies to be moving through space.” But in the weeks since, processing the experience has proven more complicated than expected. “After the inauguration, everyone has been so bombarded by statements and manifestoes, protests and marches,” NTG says. “With our piece, we’re being careful that it isn’t just regurgitation.”

The emerging performance combines projection, sound and movement (featuring Sides and a small group of performers), punctuated by moving sculptures by NTG.

“There were so many interesting encounters that happened along the march,” Sides says, “even just the texture of the endless stream of feet, of bodies everywhere. After the march, after listening to the footage, the conversations, the waves of voices between bodies and buildings, the buoyancy of vocals all around…it was a really incredible, oh shit moment: I’m one of those bodies.”