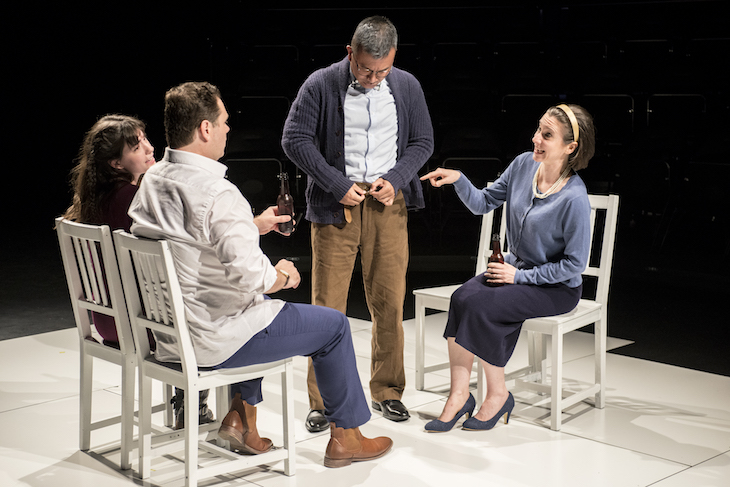 Strawshop leans into the unfinished quality of its production of Craig Lucas’ Prelude to a Kiss. When actors aren’t in a scene, they sit quietly on the edges of the stage, racks of costumes and tables of props behind them. The set is little more than a few white panels on the ground. The often shapeless blocking suggests scenes that are just beginning to come together.

Of course, they are just beginning to come together. Two weeks ago, Strawshop was still officially staging Lucas’ Reckless. On Aug. 28, the company announced it was jettisoning Reckless, a decision initiated by the artists in rehearsal because “some aspects of the story have not aged well.” Presumably, the cast had been discussing its issues with a character pretending to be deaf for some time; whenever the decision to stage a different Lucas play was made, it was a quick turnaround.

Fortunately, Strawshop’s cast, retaining all seven actors from the original show, is quite capable, and the best performances in Prelude to a Kiss have a kind of high-wire thrill to them. MJ Sieber, who plays protagonist Peter Hoskins, seems to be exulting in the challenge, with an exuberance that seems largely fueled by adrenaline.

Tony-nominated for Best Play in 1990, named a Pulitzer finalist in 1991 and acclaimed as an allegory for the devastation of AIDS, Prelude to a Kiss is a supernatural fantasy with no regard for internal logic, a romance with all the heat of a Meg Ryan rom-com (no surprise—she starred in the film adaptation) and a paean to living life to the fullest that could have been ripped from the pages of a Chicken Soup for the Soul book. Armed with a hacky body-swapping premise, Lucas wraps us in a cocoon of banal observations about love and life, complete with characters dull enough to be captivated by these insights.

Sieber’s Peter falls hard for Rita Boyle (Anastasia Higham) after meeting her at a party. He’s a neurotic desk jockey who ran away to Amsterdam as a teenager; she’s a socialist bartender who wants to work in marketing and hasn’t been able to sleep since she was 14. None of these facts are developed past the wacky character trait stage.

A whirlwind romance leads to approval from her parents (Ray Tagavilla, doting and doddering, and his sensible counterpart Marianna De Fazio) and a wedding, where an unfamiliar guest (Galen Joseph Osier) would like to kiss the bride. Bam, whoosh, a flash of light. Suddenly things aren’t as they seem.

Peter’s puppy-dog enthusiasm crashes into a roadblock of disappointment when his honeymoon with Rita goes off the rails, and Sieber’s brain seems to jolt with a power surge, delight colliding with despair and rendering him helpless. Higham plays her turnabouts more quietly, the wry puncturing of Peter’s foibles from their early relationship turning colder and meaner. Both actors are a pleasure to watch, even when Lucas insists on dumbing Peter down to drag out the drama.

Though the other supporting players (Rachel Guyer-Mafune, Brandon Felker) have little to do here, this new play selection feels tailor-made for the primary cast members. I’d prefer to watch Sieber, Higham and Osier in a play that wasn’t so high-concept and low-ambition, but the fact that Strawshop’s gambit works at all is a testament to their abilities.

Prelude to a Kiss runs through Oct. 6 at 12th Ave Arts